Giant Pyramid Discovered Off The Coast Of Mexico

Using satellite images, a researcher claims to have discovered what appears to be one of the largest pyramids ever on the planet, just off the coast of Mexico.

Mankind has really no idea about everything that is located under our planets Ocean. In fact, we have yet to explore over 90 percent of the ocean floor. Many people believe countless ancient cities and civilizations are hidden away beneath our planet’s oceans.

Now, using Google Earth, a researcher has discovered a humongous pyramid deep beneath the Pacific Ocean. According to Marcelo Igazusta, it is a perfectly shaped pyramid and is one of the many structures that are located all around the globe.

Igazusta claims that he spotted a beam of light from the darkness of the Pacific Ocean near the coast of Mexico which eventually led him to this extraordinary discovery’, that can be verified by anyone entering the following coordinates on google Earth: 12°8’1.5″N, 119°35’26.4″W 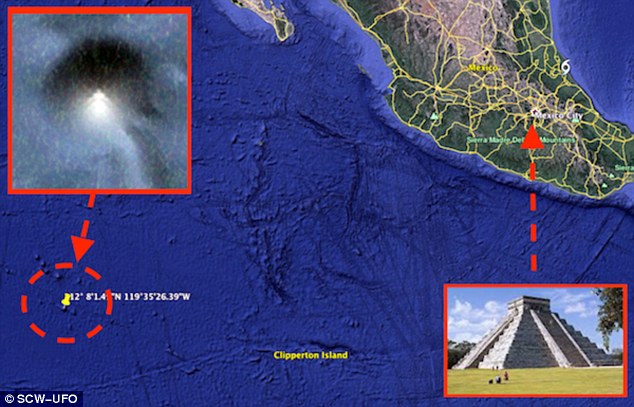 ‘It’s a perfect pyramid that measures 8.5 miles across one side of its base,’ Waring wrote in his blog UFO Sightings Daily.

‘That’s a conservative estimate; it could be up to 11 miles across.’
According to Warring, there might be a connection with the huge underwater pyramid and the nearby Aztec and Maya Pyramids in Mexico and other Central American countries.

However, not everyone agrees that it’s a pyramid, there are many remain skeptical about the findings saying that it is just another geological formation that has been misinterpreted yet again.

In recent years, Google Earth has become one of the most valuable tools for UFO hunters and researchers around the globe.

Not long ago, using constellations and Google Earth, a teenager from Canada has ‘discovered’ what researchers are calling one of the largest, previously unknown ancient cities belonging to the Maya. Using the Madrid Codex, Gadoury found 22 Mayan constellations which he placed on Google Maps.

By doing that, he realized that the stars matched the location of 117 Ancient Mayan Cities. Gadoury noticed that the brightest stars coincided with those most important ancient cities. Then he analyzed a twenty-third constellation which he found in another book and found it contained three stars corresponding to only two cities on the map, His hypothesis, then, was that there had to be the 188th city in a remote and inaccessible area of the Yucatan Peninsula.

In fact not long ago, in 2012, American researcher Angela Micol discovered ‘Pyramids larger than those found on the Giza Plateau, using satellite images. According to Micol, the site where the monuments were found includes a 620 ft-wide triangular plateau which is believed to be nearly three times the size of the best-known Ancient Egyptian Pyramid.