110  Pages of a never-before-seen manuscript written by Albert Einstein...

In March, we celebrate what would have been Albert Einstein’s 140th birthday.

And as we honor one of humanity’s greatest scientific minds, a collection of more than 100 letters written by Einstein have been recently gifted to the Hebrew University of Jerusalem (HU), of which Einstein was a founding member.

The recently revealed documents feature original manuscript pages and include some that have never-before-seen. They also feature personal letters that introduce us to Einstein and his idea in an unprecedented way.

The pages have been digitalized meaning that more and more people will be able to access his work. 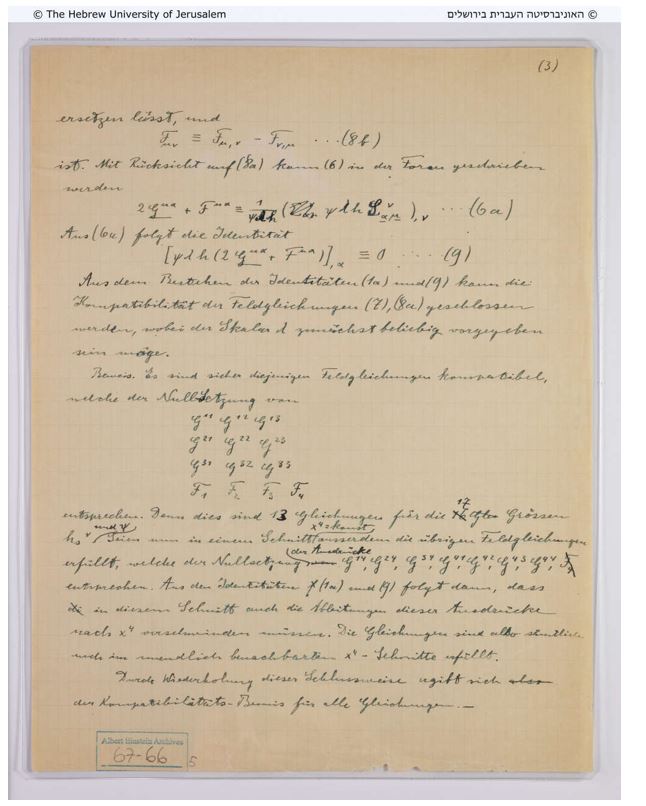 Of the total of 110 pages, 84 are mathematical derivations. Within them, we also find unedited research notes which Einstein wrote between 1944 and 1948.

Furthermore, experts have revealed that the scientific paper of the recently digitalized papers is still unclear, but scientists are currently working hard to understand and decipher the possible implications the new documents could have for the future of science.

According to experts, so far, an eight-page unpublished appendix to a scientific article which details the Unified Theory is the most interesting one.

Interestingly, scholars thought that the appendix had been lost until now.

But in addition to revealing the scientific genius of Einstein, the papers also reveal a never-before-seen person side of the German genius.

One of the pages features a handwritten letter to his son Hans Einstein who was living in Switzerland. In the letter, the German Noble Prize winner expressed his worry about various European Affairs as well as the rise of the Nazi Party in Germany. He also expressed a cautious hope of a gradual improvement in his native country.

“I read with some apprehension that there is quite a movement in Switzerland, instigated by the German bandits. But I believe that even in Germany, things are slowly starting to change. Let’s just hope we won’t have a Europe war first… the rest of Europe is now starting to finally take the thing seriously, especially the British. If they would have come down hard a year and a half ago, it would have been better and easier,” he wrote to his son.

Einstein left Germany just before Adolf Hitler came to power in 1933, renouncing his German citizenship. He moved to the United States, where he obtained citizenship in 1940. In 1952, Einstein was offered the Israeli presidency, but he rejected it.

The new collection of papers joins more than 80,000 items already preserved in the Albert Einstein Archives. Some of the items include medals, diplomas as well as photographs.