3 mysterious sets of Geoglphys that researchers are unable to...

Geoglyphs are considered to be large designs or motif created on the ground made of clastic rock or other similar durable material on the landscape. Some of them, like those at Nazca, were made by the careful removal of soil in the dry desert, and due to specific weather conditions, the intricate designs have remained largely untouched and well preserved for researchers to study. On Earth, there are numerous mysterious geoglyphs that defy explanation. In this article, we take a look at some of them, trying to understand their origin, purpose, and meaning.

The Nazca lines are considered as the most important and most famous geoglyphs ever discovered on our planet. The mysterious lines, geometric shapes and animals are found in the Nazca desert in Southern Peru, and are believed to have been created by the Nazca people for an unknown reason sometime between 200 B.C. and 500 A.D. At Nazca, scholars have identified over 800 straight lines, 300 geometric figures and 70 animal and plant designs, also called biomorphs. The largest figure found at Nazca stretches about 200 meters across. According to legend, the mysterious Inca creator god Viracocha commissioned the Nazca Lines and glyphs in the past.

Viracocha was one of the most important deities in the Inca pantheon and seen as the creator of all things or the substance from which all things are created, and intimately associated with the sea. One of the most intriguing designs of Nazca is the one which represents a Spider. Phyllis Pitluga, a senior astronomer at the Adler Planetarium and a protégé of Reiche, performed computer-aided studies of star alignments. She asserted the giant spider figure is an anamorphic diagram of the constellation Orion. According to some claims, scientists from the University of Dresden researched the Nazca lines, measuring the magnetic field and electric conductivity. According to these claims, the results of the research performed by scholars of the University of Dresden showed that electric conductivity was 8000 higher on the Nazca lines than next to them.

The Geoglyphs of Kazakhstan 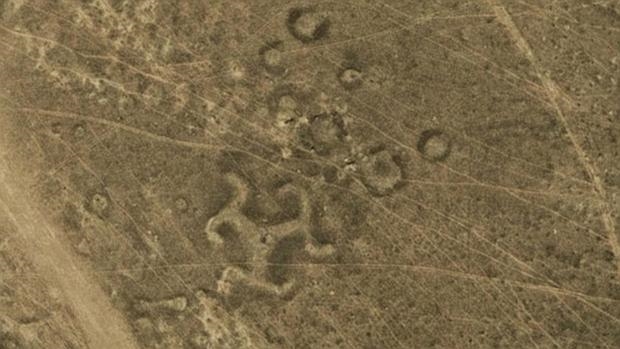 Researchers believe the Geoglyphs found in Kazakhstan could be evidence of a long-lost 8,000-year-old Civilization. According to recently released satellite images from NASA, there are dozens of giant geometric figures of squares, lines, crosses, and circles, some of them approximately 200 meters in size, which, just as those found at Nazca, are only visible from the air. These are the ‘Nazca lines’ of Kazakhstan. Even though the discovery was made some eight years ago thanks to popular software ‘Google Earth’ when Russian archeologist Dmitriy Dey found them, since then, several experts in the field have helped expand the research into these mysterious geometric figures. There are over 260 geoglyphs that have been discovered so far with the oldest one being around 8,000 years old, and most of them can be found near a Neolithic village of the area. The largest of them is a giant square composed of 101 raised mounds. Their exact purpose remains a profound mystery.

The Geoglyphs of Jordan

Just as the geoglyphs at Nazca and Kazakhstan, the mysterious, intricate designs found in the ‘black’ desert have fascinated researchers ever since their discovery. The mysterious wheel-shaped geoglyphs in Jordan could date back as far as 6500 BC according to archeological studies. This means that these geoglyphs are at least 6,000 years older compared to the more famous ‘Nazca lines’ in Peru. While researchers are still not one hundred percent certain as to what their exact purpose was, they believe the enigmatic ‘wheels’ which were drawn into the black desert of Jordan could have been used as celestial observatories and even burial grounds.

Just as the Nazca lines in Peru, the mysterious geoglyphs in Jordan can only be appreciated from the air. Researchers still cannot explain why these giant wheels were built to be almost invisible from the ground. According to archeological study, the mysterious geoglyphs in the Jordanian desert demonstrate accurate geometric patterns which extend up to several kilometers. No one has been able to understand how ancient mankind created these figures over 8000 years ago, a time which according to mainstream scholars, people were not evolved enough to create such geometric patterns. 8000 years ago the climate of the Middle East was much wetter and the surrounding landscape was different from what we see today.