A mass sacrifice of children took place in Peru to...

The largest human sacrifice in history took place thousands of years ago in ancient Peru to appease the gods after a climatic phenomenon.

The new study detailing what is considered by experts the largest mass sacrifice discovered to date is the result of six years of excavation work at the site from 2011 to 2016.

When the discovery was made, researchers had no idea what could have driven such a dramatic, large-scale human sacrifice. 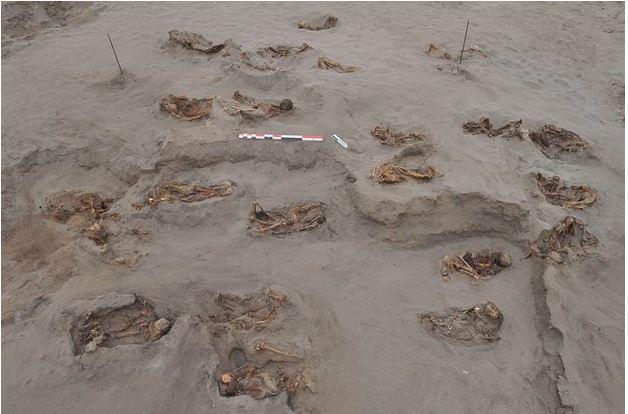 But now, after studies, analysis, and excavations, researchers believe they now know what exactly happened, and why 140 children were sacrificed by the ancient Chimu Culture.

The sacrificed remains were buried under the sands of Huanchaquito, on the northern coast of Peru. There, archaeologists discovered 140 children’s skeletons, in addition to the remains of 200 llamas.

Although the reasoning behind the dreadful mass murder of children, who were only between 5 and 14 years old, can not be definitively determined, researchers believe that the act could have been an answer to a disastrous weather event known as El Niño.

Study author John Verano, professor of anthropology at Tulane University, said: “This site opens a new chapter on the practice of child sacrifice in the ancient world. This archaeological discovery was a surprise to all of us – we had not seen anything like this before, and there was no suggestion from ethnohistoric sources or historic accounts of child or camelid sacrifices being made on such a scale in northern coastal Peru.”

“We were fortunate to be able to completely excavate the site and to have a multidisciplinary field and laboratory team to do the excavation and preliminary analysis of the material.”

Studies of the skeletons revealed cuts across the children and llamas’ sterna, suggesting that the Chimu priests opened their chest and removed their hearts, in an effort to appease the gods.

“Accessing the heart by transverse sectioning of the sternum is a technique familiar to modern thoracic surgeons, and is known by various names. The purpose of opening the chests of the children can only be hypothesized, but heart removal is a likely motivation,” explained Professor Prieto.

And while human an animal sacrifice is not something strange in central and South America, never have experts found a mass sacrifice this big.

Furthermore, experts note that prior to this discovery, archaeologists had little to no evidence that such brutal practices exited in this part of South America.

The Chimu Culture was a pre-Incan society considered the largest pre-Colombian empire in Peru until the arrival of the Inca.