A surprising discovery of a Maya shrine reveals Arrival of...

Researchers are surprised with a new discovery consisting of fragments of an ancient maya shrine which reveals “previously unknown” details on a “Cold War” in the Maya Empire.

The fragment of the carved stone monument was discovered at El Achiotal, an ancient Maya site located depicts the face of an ajaw or vassal lord.

This incredible new discovery at the Maya site in Guatemala has made it possible for researchers to understand new details regarding a fierce rivalry which ruled over two great Ancient Maya superpowers during some 1500 years ago. 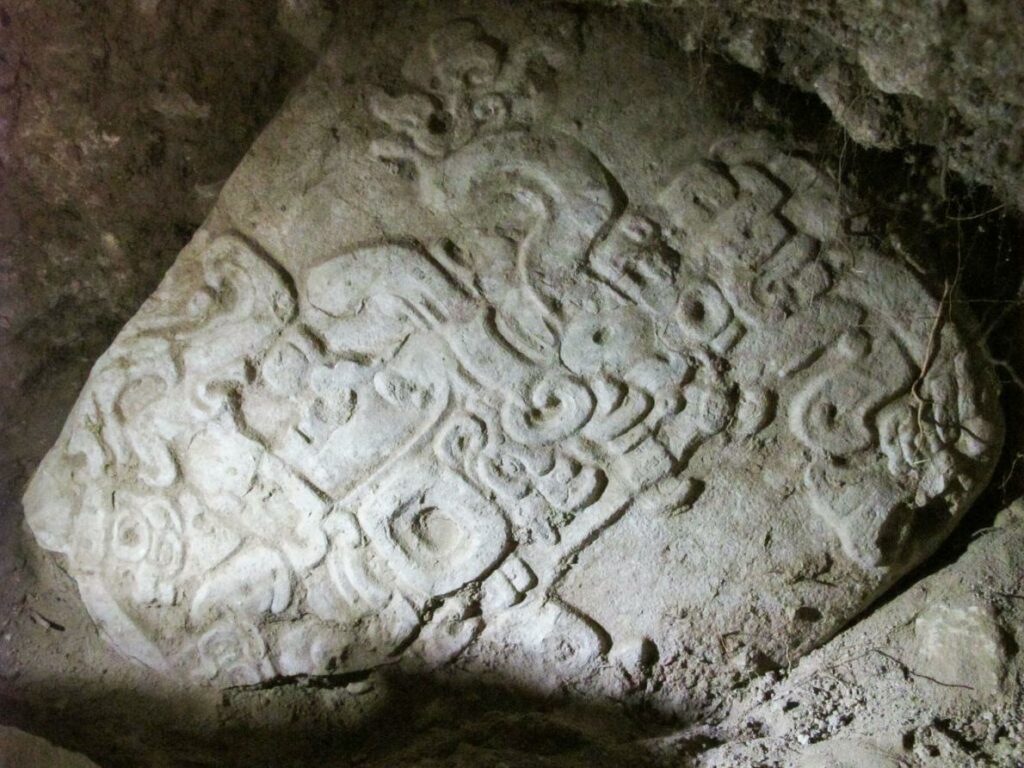 This discovery was announced in Guatemala City was presented by The La Corona Regional Archaeological Project, co-directed by Marcello Canuto, director of Tulane’s Middle American Research Institute, and Tomás Barrientos, director of the Department of Archaeology at Universidad del Valle de Guatemala.

According to researchers and their preliminary study, forces belonging to Siyaj K’ahk’s arrived at the Maya lowlands somewhere around 378 D.C., overturning the rulers of the great Maya city-state of Tikal. They established among other things, a new political order across the ancient Maya empire. Siyaj K’ahk’, also referred to as “Fire is Born” was A prominent Ancient Maya political figure commonly mentioned in the Classical Period Glyphs. He is believed to have been the general of the Teotihuacano ruler Spearthrower Owl.

National Geographic Young Explorer and Tulane graduate student Luke Auld-Thomas said “We were looking for a stairway and digging test units.” He added “when an excavator working on a unit backed out of the hole he had dug and told us he found what looked like a stela.”

“We gasped and looked in, and there’s the face of a king just staring straight out at us,” says Auld-Thomas. “It had been very carefully placed by the ancient Maya so that it was looking out a doorway, like a museum piece in a display case.”

“We never expected to find a stela at El Achiotal,” says Canuto, who began research there in 2009 with a National Geographic Society/Waitt grant and considered it primarily a Late Preclassic (400 B.C. – 250 A.D.) site.

As researchers continued with their excavation duties, they came upon two stelae fragments, a discovery that they did not expect.

According to National Geographic; The top fragment of the stela features the partial image of a man holding a serpent bar, a traditional symbol of a ruler.

After the discovery was made, Davit Stuart from the University of Texas at Austin, who is an expert Maya epigrapher flew to El Achiotal to study and try to decipher the hieroglyphs located on the back of the stela. According to Stuart, the hieroglyphs revealed that the stela was in fact erected to celebrate the 40th anniversary of an “ajaw.”

Regrettably, the newly found stela is incomplete so researchers could not figure out the name of the ajaw and the leader.

The Ajaw or Ahau has two meanings in the history of the Pre-Columbian Maya civilization. It is believed to represent a political title attested from Mayan epigraphic inscriptions but it could also designate the concluding, the 20 named day of the tzolk’in or the divinatory calendar on which a king’s k’atun-ending rituals would fall.

According to Stuart, there was a date inscribed on the stela, but Stuart states that reading it was one of the most difficult translation jobs that he has ever been part of. Stuart also states; ” scribes were very tricky and they wrote one of the date elements in a super-ambiguous way.”

Researchers believe that the anniversary date depicted on the stela, could be connected with four potential dates, and Stuart believes the date everyone would be looking for is November 22, 418 A.D.

Counting back 40 years from November 22, 418 A.D. marks an anniversary of an event in 378 A.D. the date when Siyaj K’ahk’ installed new rulership in Tikal setting off a series of changes both in the Maya political and cultural system.

“We know that when Siyaj K’ahk’ came on the scene in Tikal he was installing subject rulers all around that region,” Stuart explains. “We just had no idea that El Achiotal was sucked into this new world order.”