Archaeologists in Cambodia have made a sensational discovery as they have uncovered a—6-foot, 23-inch wide statue at the world-famous site of Angkor Wat. 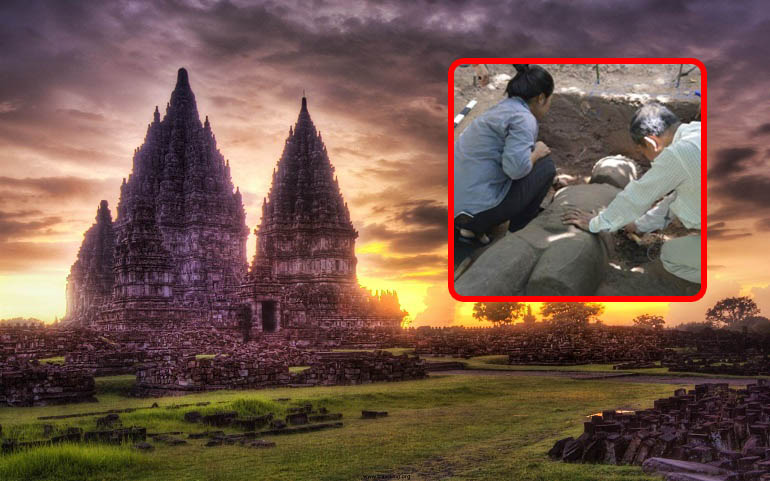 Scientists performing on site excavations at the Angkor Wat temple complex have stumbled across a massive statue believed to a representation of a “Guardian” of the ancient hospital.

The Angkor Wat temple is said to have been built by the Khmer King Suryavarman II sometime during the early 12th century. “Wat” is the Khmer word used for a temple.

Experts who participated in the excavation include researchers from Singapore’s Institute of Southeast Asian Studies, who together discovered the massive statue according to the Government Agency that oversees excavations, the Apsara Authority.

According to archaeologists, it is believed that the ancient hospital dates back at least to a period around the eighth and ninth centuries, and this newly excavated statue is one of the largest ever objects recovered from the site, belonging to that era in recent years.

The discovery shows just how many ancient artifacts remain hidden beneath the surface, not only at Angkor Wat, but numerous other archaeological sites around the planet.

The “Guardian statue” was found by accident as archeologists were studying the connection between the canal and the ancient hospital reports the Apsara Authority.

The 6-foot tall statue isn’t intact. It is missing both of its feet. The right leg ends abruptly before the ankle while the left leg ends near the bottom of the thigh.

Furthermore, both arms of the Guardian are missing, ending before the shoulders.

Experts excavated the statue some 40 centimeters beneath the surface. After experts have cataloged everything, the statue will be presented on exhibition in the museum in the northwestern region of Siem Reap, where Angkor is located.

Experts believe how the statue dates back to a period around the 12th or 13th centuries and was used as a protective symbol at the entrance of the hospital built during the reign of King Jayavarman VII—post-humous name of Mahaparamasaugata, ruler of the Khmer Empire in present-day Siem Reap, Cambodia.

The Khmer Empire is believed to have flourished from approximately the 9th to 15th centuries. The greatest legacy left behind by the empire is without a doubt Angkor, the capital city during the empire’s zenith.

The breathtaking monuments of Angkor—like Angkor Wat and Bayon—are evidence of the Khmer Empire’s massive power and wealth, their breathtaking art and culture, as well as their extraordinary architectural techniques and aesthetical precision.

The site was so massive that satellite images have revealed that Angkor—during its peak between the 11th and 13th centuries, was the largest pre-industrial urban center on the surface of the planet.

In recent years experts have used sophisticated tools to search the area around Angkor Wat for more discoveries, and study collapsing monuments. With the help of radar and satellite imagery, experts are able to see changes in groundwater and how they are causing rapid decay of the monuments. These techniques could help experts ‘guard’ the Angkor monuments and other valuable structure nearby.

Experts also resort to LiDAR—Light Detection and Ranging—a remote sensing method used to examine the surface of the planet.

This has allowed experts from the University of Sydney to discover structures forming the shape of a colossal spiral and a collection of buried towers at the ancient site.