Are These Artificial Structures On Mars? Satellite images of Mars...

Images taken by the HiRISE camera onboard the MRO orbiting Mars seem to indicate intelligently designed structures and subdivision which seem to be of logical proportions of the base dimensions.

The anomalies found at the Hellas Planitia have roughly the same length and similar straight features that spread across a distance of one kilometer. 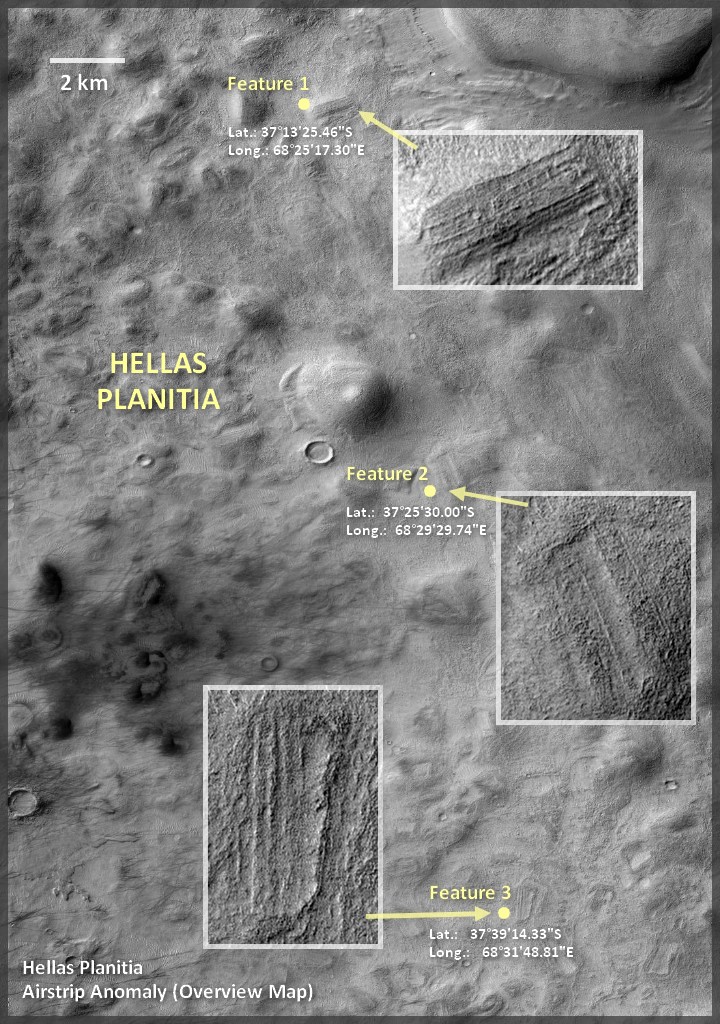 The idea that Mars is inhabited –or at least was, millions of years ago— has fascinated researchers and people for decades.

Throughout human history, as far as there are written records, the red planet has captured the interest of ancient civilizations around the world in a magical way.

But is there something more to this mysterious planet other than it’s red color and authority in the skies?

How much do we know today about Mars?

And what if governments worldwide are not telling everything they know about the red planet?

In the last couple of years, we have learned so much about the red planet.

We have come to understand that Mars isn’t a desolate, dead world as researchers previously believed.

In fact, Mars may have been Earth’s twin planet in the distant past.

Scientists have found a couple of extremely interesting clues that suggest life may have developed on Mars in the distant past.

Not long ago, scientists discovered that there is liquid water flowing on the surface of Mars. Researchers have also found traces of giant oceans, rivers, and lakes that covered most of the Martian surface.

Experts have also discovered faint traces of a once mighty atmosphere that encircled the red planet in the distant past.

Recently, researchers have discovered that in the distant past, Mars had a ‘human’ breathable atmosphere.

As you can see, every discovery points to the possibility that life as we know it may have developed on Mars in the distant past.

The question remains how much life on Mars may have developed.

Was life on Mars just microbial?

Or is it possible that the planet offered ideal conditions in the past, for an advanced alien species to flourish on Mars?

Curiously, based on the numerous satellite images of Mars and photographs taken by NASA’s rovers exploring the surface of the red planet, people around the globe have been able to identify certain ‘anomalies’ on Mars which ‘seem’ to indicate an advanced species, capable of erecting structures, once flourished on Mars.

Now, these structures are covered under the Martian surface and are barely visible according to many.

A perfect example of possible structures is identifiable in the images taken by the HiRISE Camera onboard the Mars Reconnaissance Orbiter (MRO) at the Hellas Planitia on Mars.

To see the original images, please visit this link.

UFO hunters believe the Hellas Planitia on Mars may hide an anomaly indicative of intelligently designed structure buried under the surface.

According to a post written on ATS, the author indicates that the first formation seen in the satellite images is the most noteworthy mostly because of the subdivision which seems to be of logical proportions of the base dimensions.

The author explains that all of the formations seen in the Hellas Planitia have roughly the same length and similar straight features that spread across a distance of one kilometer.

While the author remains reserved saying that they do not have to be necessarily artificial in nature, their extraordinary alignments and subdivision are something noteworthy to mention.