These Were The Beast And Monsters Of Ancient Greek Mythology 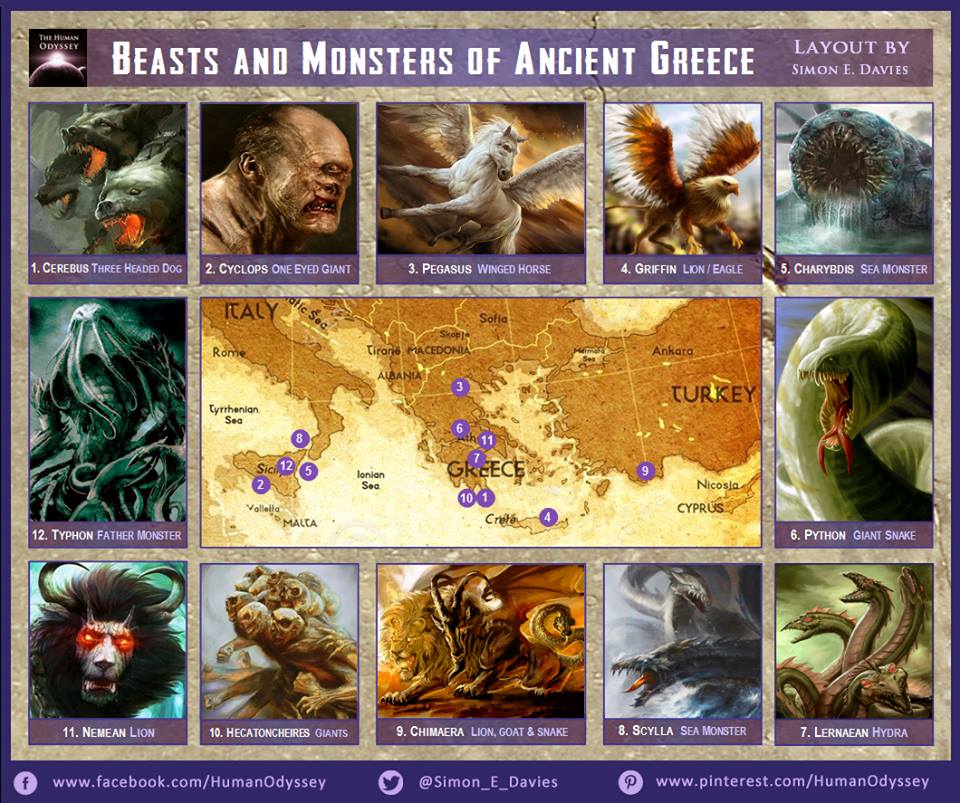 Greek mythology is rich with strange beasts and terrifying monsters. They were often encountered on heroic quests, testing the likes of Jason, Odysseus and Herakles. These adventurers often had to use their wits, skills and strength to overcome such formidable creatures. There were also many fabulous beasts which had a positive role in mythology, such as the winged horse Pegasus who helped Peruses, or the majestic Phoenix which rose from the ashes.

1. Cerberus was a huge and powerful three-headed dog. He was owned by Hades, god of the dead, who used the fearsome hound to guard the entrance to the underworld. In his final labour, Hercules went to the underworld and kidnapped Cerberus, considered to be an impossible feat by most.

2. The Cyclops was a giant human who had a single eye in the middle of his forehead. The Cyclopes made lightning and thunderbolts for Zeus to use against his enemy. The brutal Polyphemus was a cyclops who lived on an island (possibly Sicily) where he cannibalised sailors who got shipwrecked on his shores. He was eventually blinded by Odysseus.

3. Pegasus is one of the most renowned creatures in Greek mythology. He is a divine, winged stallion who is usually depicted as pure white in colour. He is the offspring of Poseidon and Medusa and legend says every time his hoof hit the earth, a spring of water bubbled forth.

4. The Griffin is a legendary creature with the body, tail, and back legs of a lion; the head and wings of an eagle; and an eagle’s talons as its front feet. As the lion was traditionally considered the king of the beasts and the eagle was the king of the birds, the griffin was thought to be an especially powerful and majestic creature.

The Hydra was a massive and poisonous serpent with nine heads. Every time one head was injured, another two grew in its place. Hercules sought out the monster in its dark marsh and succeeded in destroying it.

5. Charybdis was the monstrous daughter of Poseidon and Gaia. She resided on the Strait of Messina, off the coast of Sicily. Legends says she had a gaping maw which swallowed huge amounts of water, before belching it back out again, creating large whirlpools capable of dragging a ship underwater.

6. Python was usually represented as a serpent, he presided over the Delphic oracle. Unfortunately he became enemies with the Olympian deity Apollos who ended up killing him and taking the oracle for himself.

7. The Lernaean Hydra was an ancient serpent which possessed many heads. It was incredibly hard to kill, for each head that was cut off, it grew two more in its place. It also had poisonous breath and toxic blood. The Hydra of Lerna was eventually killed by Heracles as the second of his Twelve Labours. Its lair was the lake of Lerna in the Argolid. Beneath the waters was an entrance to the Underworld, and the Hydra was its guardian.

8. Scylla was a monster that lived on the other side of the strait of Messina, opposite Charybdis. Scylla was once a beautiful naiad, but the jealous Amphitrite turned her into a monster by poisoning the water of the spring she bathed. Sailors who came to close to the strait of Sicily would try and avoid Charybdis on one side, but often pass too close to Scylla with disastrous results.

9. The Chimera was a monstrous fire-breathing female creature of Lycia in Asia Minor who was composed of the parts of three animals; a lion, a snake and a goat. The Chimera was one of the offspring of Typhon and Echidna and a sibling of such monsters as Cerberus and the Hydra.

10. The Hecatonchires or Hundred-handers, were figures in an archaic stage of Greek mythology. They were giants of incredible strength and ferocity that surpassed that of all the Titans, whom they helped overthrow. Legend says they had a hundred hands and fifty heads. After the fall of the titans, it is said three of the Hecatonchires became guardians of the gates of Tartarus.

11. The Nemean lion was a vicious monster in Greek mythology that lived at Nemea. It was eventually killed by Heracles. It could not be killed with mortal weapons because its golden fur was impervious to attack. Its claws were sharper than mortal swords and could cut through any armour.

12. Typhon was known as the “Father of All Monsters”. He was believed to be the most deadly monster of Greek mythology. His human upper half supposedly reached as high as the stars, and his hands reached east and west. Instead of a human head, a hundred dragon heads erupted from his neck and shoulders.