Bryn Celli Ddu one of the most significant, prehistoric sites... 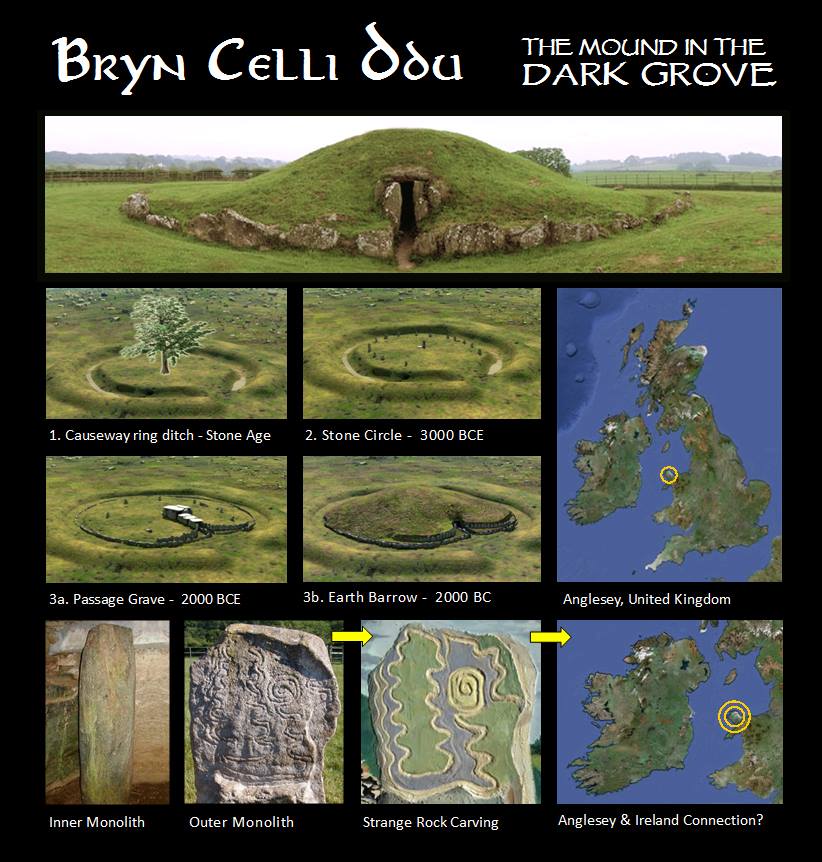 Bryn Celli Ddu is one of the most significant, prehistoric sites in Britain, located on the Welsh island of Anglesey. Its name means ‘the Mound in the dark Grove’, a term which may hearken back to its ancient origins.

Originally, Bryn Celli Ddu was designed as a stone circle (3000 BCE), before being transformed into a passage grave a thousand years later. This megalithic structure features two large monoliths, both of which seem to contain an incredible mystery:

THE INNER MONOLITH: within the tomb stands a stone, which upon closer inspection reveals a strange bark like texture. A recent discovery suggests that this monolith may in fact be a fossilized tree, thousands of years old.

Trees worship was common in the Neolithic and early Bronze Age. The symbol of a world tree can be found in many mythologies around the world, where they were said to hold up the cosmos, providing a link between the heavens, the earth and the underworld. In European folklore, the best known example of the world tree is Yggdrasil (from Norse mythology).

It is possible that before Bryn Celli Ddu was constructed, the site was worshiped as a sacred Grove, much as its name suggests (The mound of the Dark Grove)?

Fossil experts have suggested that wood can be fossilized in under a hundred years if treated in a peat bog. The acid and silica in effect mummified the bark, preserving it for millennia. If this were the case, then the fossil stone of Bryn Celli Ddu may represent the last surviving ‘world tree’ left on Earth.

THE OUTER MONOLITH: Outside the tomb stands a monolith which has a strange carving etched upon its surface. On first impression, the swirling patterns seem indicative of many other megalithic designs, consisting of cups, rings and swirls.

However, when looking at these patterns more candidly, an interesting shape seems to emerge from the meandering lines, resembling a mass of land. I coloured in the image with blue and green to delineate areas of what could be construed as land and water.

With this literal interpretation in mind, a compelling theory seems to emerge. Could the land mass to the left be Ireland, the swirling yellow ring Anglesey (a sacred land once used by the Druids) and the land mass below it Wales. If so, then this would make the stone etching a map, indicating Bryn Celli Ddu as a significant landmark between two Celtic realms.

The use of a spiral in place of Anglesey suggests that this small island was part of a shamanic landscape. Several theorists believe the spiral etchings found on megalithic sites were inspired by entopic phenomena (derived from shaman and druids while in altered states of consciousness). The spiral, then, represents the swirling sensation that shaman encountered while going into trance.

With the presence of a fossil tree (hearkening back to the worlds tree of pagan mythology), and the spiral stone engraving (indicative of outer body experience), there is strong evidence to imply that the passage grave of Bryn Celli Ddu was none other than a gateway to the Other Worlds of Ireland and Britain.