Two Canadian Airforce Pilots snapped one of the most extraordinary images of an Alien Craft in 1956 from an altitude of 36,000 ft (app. 11 km). The object was higher than app. 4 km and was observed for more than 45 sec by the pilots.

According to the pilots, they saw ‘a bright light which was sharply defined and disc-shaped’ or ‘like a shiny silver dollar sitting horizontal,’ far below the planes but above the lower layer of clouds. It appeared to be  ‘considerably brighter than the sunlight.’ 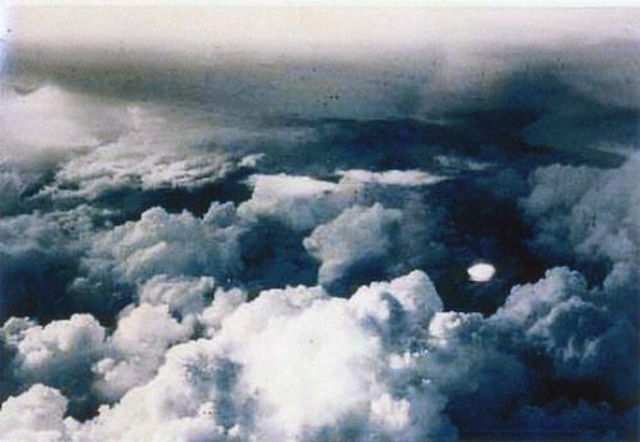 With the number of declassified documents and the sheer amount of images of UFO’s from around the globe, it has become evident that we are constantly beings visited by extraterrestrial civilizations from elsewhere in the cosmos.

In addition to the number of government officials who have come forward speaking out about alien life, astronauts and military personnel have also stated their belief that intelligent alien species exist without a doubt.

While there are countless reports of UFO cases that are mistakes or elaborate hoaxes, a notable percentage of UFO sightings defy all rational explanation. The studies stated here below are just a few of the many that have scientifically analyzed the most mysterious aerial phenomenon of the 21st century.

An extremely interesting quote comes from Peter Andrew Sturrock who is a British scientist and Emeritus Professor of Applied Physics at the Stanford University who said:

“If it does indeed turn out that there is relevant physical evidence, if this evidence is carefully collected and analyzed, and if this analysis leads to the identification of several facts concerning the UFO phenomenon, then will be the time for scientists to step back and ask, what are these facts trying to tell us? If those facts are strong enough to lead to a firm conclusion, then will be the time to confront the more bizarre questions. If, for instance, it turns out that all physical evidence is consistent with a mundane interpretation of the causes of UFO reports, there will be little reason to continue to speculate about the role of extraterrestrial beings. If, on the other hand, the analysis of physical evidence turns up very strong evidence that objects related with UFO reports were manufactured outside the solar system, then one must obviously consider very seriously that the phenomenon involves not only extraterrestrial vehicles but probably also extraterrestrial beings.” –The UFO Enigma: A New Review of the Physical Evidence, Peter A. Sturrock. 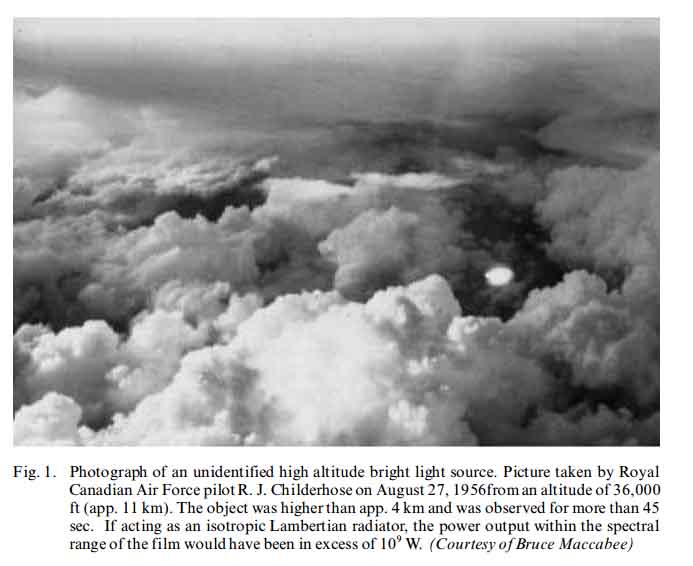 Professor Sturrock is one of the few scientists that scientifically analyzed UFO reports, taking a look at evidence ranging from military reports to images and video footage. In the 1990’s Professor Sturrock came together with a team of researchers and examined the evidence related to UFO sightings. Professor Sturrock and his team published the study called Report on a Survey of the Membership of the American, Astronomical Society Concerning the UFO Problem: Part 1, in the Journal of Scientific Exploration, Vol. 8, No. 1, pp. 1-45, 1994

The report states: The witnesses in this MA-1 case are Royal Canadian Air Force pilots who were flying in a formation of four F-86 Sabre jet aircraft (Figure 1). The planes were flying at 36,000 ft (about 11 km), headed due west over the Canadian Rockies, about an hour before sunset.

As they were approaching a large thunderhead R. J. Childerhose, the pilot in the second position (left side of the formation) saw a „bright light which was sharply defined and disc-shaped“ or „like a shiny silver dollar sitting horizontal,“ far below the planes but above the lower layer of clouds. It appeared to be  „considerably brighter than the sunlight.“

Sighting duration was variously quoted at 45 seconds (Klass, 1968) to three minutes. The pilot reported the observation to the flight leader, then took a photograph of it. (August 27, 1956. McCleod, Alberta (Canada)  Classification: MA-13)

All of the above has been backed up by Former Canadian Defence Minister Paul Hellyer in the below video: