Hidden Chambers Beneath The Sphinx: Rare Images Show How To...

In 1987 a Japanese team from Waseda University (Tokyo), under the direction of Sakuji Yoshimura carried out an electromagnetic sounding survey of the Khufu Pyramid and Sphinx and found SEVERAL cavities and tunnels. Rare images of the Great Sphinx suggests there are several intricate entrances.

The Great Sphinx of Giza has captured the imagination and interest of anyone who has seen it. This fascinating monument—which proudly guards the Pyramids at Giza—is without a doubt one of the most mysterious ancient structures on the planet.

With a length of 241 feet and a height of 66 feet, the Great Sphinx of Giza holds the record as the largest monolith statue on the surface of the planet.

But its beauty and mystery go far beyond its size.

If we take a look at the Sphinx today and compare it to extremely old and rare images of the monument when it was still covered in sand, we will notice numerous interesting details which point to the possibility of an underground world existing beneath it.

This ancient monument—which some authors argue is far older than the ancient Egyptian civilization—was discovered (almost completely covered in sand) in AD 1817, when the first modern archaeological dig, led by Giovanni Battista Caviglia managed to uncover the Sphinx’s chest completely.

After a couple of decades, the entire Sphinx was finally excavated in 1925 to 1936 by an archaeological expedition led by Émile Baraize.

It is precisely during that period when the most interesting images of the Great Sphinx were taken. These images depict numerous cavities, entrances and what appear to be tunnels that according to many leads below this majestic ancient monument.

Interestingly, in 1987 a Japanese team from Waseda University (Tokyo), under the direction of Sakuji Yoshimura carried out an electromagnetic sounding survey of the Khufu Pyramid and Sphinx. 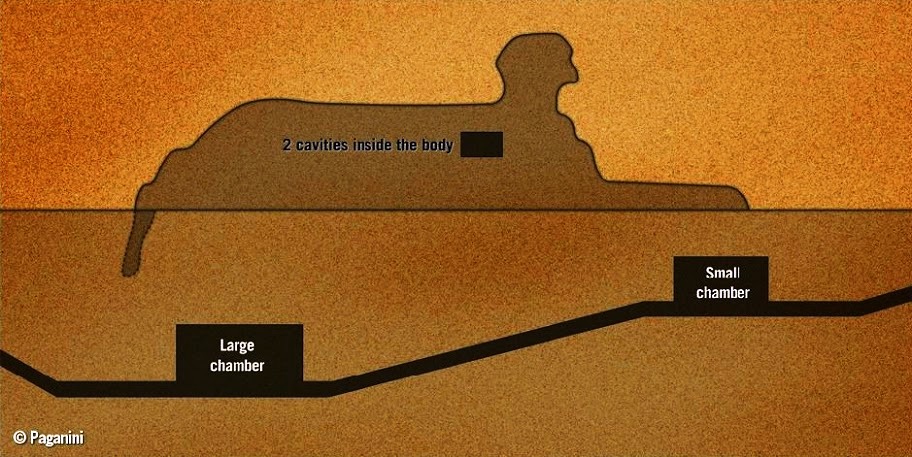 The conclusion of the Japanese work suggests that the sanctuary of the Sphinx contains more cavities below the Sphinx than were previously known. (Source) (Source) (Reference)

The results of the survey performed by Scientists from the Waseda University were confirmed in 1991, when a team consisting of Thomas Dobecki, and John Anthony West carried out a survey of the Sphinx using seismic refraction, refraction tomography, and seismic reflection. The investigators interpreted their data to indicate shallower subsurface weathering patterns toward the back and deeper weathering toward the front, which they take to indicate that the back of the Sphinx and its ditch were carved by Khafre later than the front. They interpret their data to likewise indicate subsurface cavities in front of the front left paw, and from the left paw back along the south flank. (Source)

Seven measuring lines were installed east and west and four measuring lines north and south to scan the Sphinx over 70 meters from the east to the west and over 10 meters from the north to the south. The bedrock of the Sphinx contains more moistures than that of the pyramid. This would be because the Sphinx locates closer to an underground stream. A response was obtained which would indicate that there is a plash 2.5 to 3 meters below the ground surface near the south-eastern forefoot. On its body, a groove with a width of 2 meters, a depth of 3 meters, and a length of 2 meters was found which seems to extend underneath the body. At the center of the southern rock, vertical cracks were observed; however, the cracks never seem to affect the bedrock.

Four measuring lines were installed east and west and five measuring lines north and south to scan the Sphinx over 60 meters from the east to the west and over 7 meters from the north to the south. The northern bedrock seems to contain more moistures than the southern bedrock. The vertical cracks, run east and west across the Sphinx, would be produced naturally. On the body, there is a groove similar to that on the southern part, which seems to extend underneath the body. Under the Sphinx, therefore, there may be a tunnel. Further, near the front elbow, a geometrical cavity (1m x 1.5m x 7m) has been detected, possibly containing metal or granite.

The front of the Sphinx consists of pieces of limestone that have been arranged artificially and paved. With the passing of time, the arranged and paved pieces of limestone have been projected and recessed. At first, the team had been concerned about survey, as the turbulent reflection on the surface might disturb the sensor. Measuring lines (comprising reticulate 10 lines each) were set by meter east and west, and north and south. Inner part of both the forefeet, a geometrical cavity (1.5m x 3m) has been detected. The bottom has not been detected clearly, because the bottom may be uneven or there may be some articles. The cavity seems top extend from the east to the west, i.e., toward the chest; however, an offering table made of granite prevented survey.

At the western part beyond the offering table, two measuring lines were installed for survey east and west. The surface, which is not made of limestone and has a great number of cracks, was not measured correctly due to violent turbulent reflection on it. Rough survey has indicated the high possibility of the presence of a cavity 1 to 2 meters below the ground surface. The cavity may be connected to the above cavity located in front of the Sphinx, and may extend into the Sphinx. However, if these cavities are separated, it is very possible the former cavity located in front of the Sphinx is Sertab where the statue was installed. [pp. 7-8]

The Sertab mentioned above is more commonly called a serdab, a room in Old Kingdom tombs in which statues representing the ka of the deceased were placed. Eyeholes or slits were often provided so that the ka might gain access to its offerings. There is little reason, however, to think that the Sphinx served as a tomb. (Source) 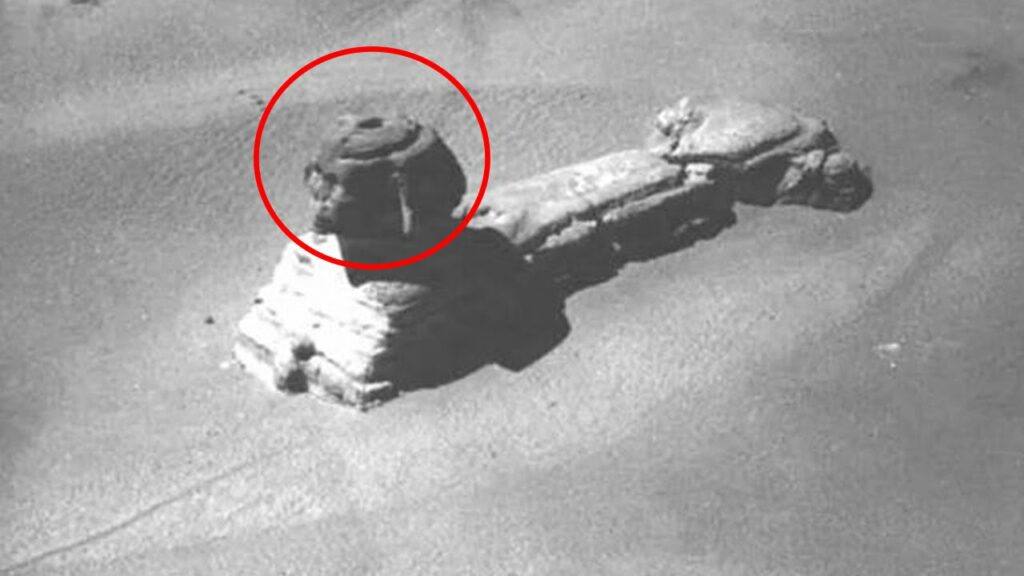 Several photos, as well as scientific survey data indicate there is a strong possibility that there are shafts and passageways leading towards unexplored chambers underneath the Sphinx. Rare images of the Sphinx show numerous anomalies that were ‘covered up’ by later restorations.

There are images of the Sphinx which show a huge fissure on top of the hips of the Sphinx, which many claims led to the burial chamber.

According to secrethistoy.wikia.com, there is also documented evidence of a large rectangular entrance on top of the hips at the back of the Sphinx.

This entrance measured 4 feet x 2 feet in size and is mentioned in many travelers reports of visits to the Sphinx. This shaft and burial chamber that it leads to is thought to have been formed during Pharaonic times, to form a retrospective burial chamber, which a few people gained access to.

A Chamber Beneath the Sphinx?

Chambers beneath the Sphinx

Tunnels and Chambers Under The Great Sphinx