Cigar-Shaped UFO spotted in NASA live Feed before link is...

According to reports, a mysterious cigar-shaped UFO has just been spotted in NASA’s live feed of the International Space Station before the link is suspiciously CUT. 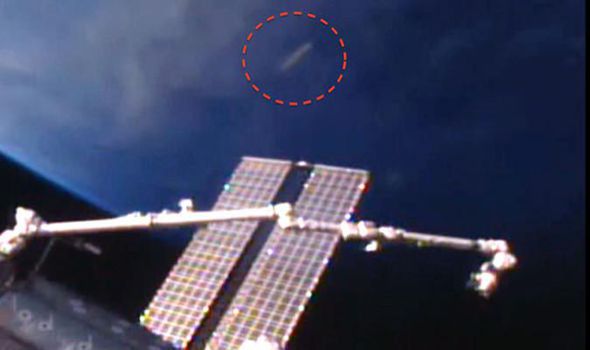 According to UFO enthusiasts, a mysterious cigar-shaped UFO has been seen shadowing the international space station. Moments after the video is mysterious shut down by NASA. The video recording which lasts approximately 1 minute and 22 seconds show a cigar-shaped object travelling alongside the International Space Station.

While most UFOhunters have seen al kinds of shapes and orbs in numerous videos from space, this time, an enigmatic cigar shaped object has been caught ‘shadowing’ the international space station and can change the way we perceive ‘alien crafts’ forever say UFO hunters.

The enigmatic object which according to UFO hunters is a cigar-shaped’ semi-transparent UFO is clearly seen in the live feed travelling alongside the International Space Station, a sighting that has led numerous UFOlogists to speculate that these objects are in fact very common in space, and apparently have no issues ‘visiting’ the international space station every once in a while.

The mysterious video footage shows a mysterious anomalous object travelling at the same speed of the International Space Station and UFOlogists believe that this object has been seen several times. In fact, UFO hunters draw similarities among the enigmatic ‘alien’ spacecraft seen in this video, to ‘the cylinder UFO and orbs seen on worldwide CNN back in 2006’.

The Editor of ufosightingsdaily.com, Scot Warring identified the object while he was looking at the live feed from the international space station.

‘As I was watching, I noticed a long cylinder object floating alongside and below the space station,’ Waring shared in his blog.

‘Its speed was matched with the ISS, but the object floating was semi-transparent,’ he continues.

‘Just when you thought it was about to come into focus, the screen went blue’.

‘That’s what happens when NASA catches a UFO on cam, they cut the feed for a few minutes.’

Concluding his ‘report’ on the enigmatic cylinder-shaped UFO, Waring states that similar ‘alien’ vehicles have been spotted in the distant past.

Earlier this year, the International Space Station was part of another ‘Alien’ encounter claim UFO hunters when bizarre footage released by Russian Cosmonauts showed another enigmatic object that was shadowing the International Space Station. The object –referred to by many as the Black Knight Satellite– was seen trailing the ISS in January this year. In the video, voices of several astronauts can be heard speaking in Russian. While it not clear if they commented the mysterious UFO tailing them, one woman does appear to gasp. One of the most interesting facts about the enigmatic ‘satellite’ is that Nikola Tesla claimed to have intercepted radio signals, from space, from the Black Knight Satellite.

Whether or not the enigmatic UFO sightings near the ISS are connected or not is up for debate, but we can say that in the last couple of years, UFO sightings in space have quadrupled as more people have been following closely NASA’s live feed from the ISS.