Elon Musk reveals his interplanetary masterplan that will take man...

Elon Musk, the genius behind Tesla Motors, Solar City and SpaceX has finally revealed his interplanetary master plan that will take man to Mars in 80 days, allowing the human species to become an interplanetary species and colonize the red planet.

Speaking at the International Astronautical Congress in Mexico today, Elon Musk revealed what many are calling the most ambitious space plan ever, a sophisticated interplanetary transportation system that could take mankind to the surface of the red planet in just 80 days in order to build a fully sustainable human colony on Mars with a population of around ONE MILLION people.

Ever since the foundation of SpaceX, Elon Musk said that the ultimate goal of the company was to develop the necessary technology that would allow mankind to colonize other planets in our solar system and the rest of the universe eventually.

More than 14 years after the founding of SpaceX, Musk has revealed details that would allow the human species to settle on another planet, beyond the confines of Earth.

Mars, get ready for humans

The futuristic, sensational and daring announcement was made at the IAC -International Astronautical Congress, held in Guadalajara, Mexico.

Elon Musk dreams big, and in order to take man to Mars and colonize the red planet, we need to develop a big rocket. Really Big. Massive.

In fact, that rocket would need to be so massive that the Saturn V rocket that took mankind to the moon looks like a toy beside it. 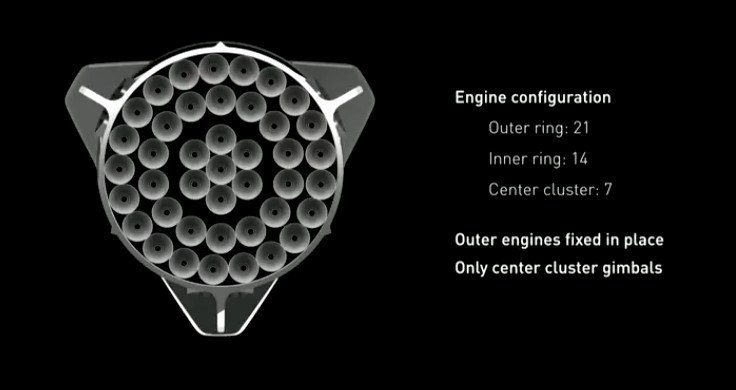 According to initial reports, up to 100 people can travel in each mission although Musk says that SpaceX hopes to increase that number to 200 in order reduce traveling costs: “In a hundred years we will have the necessary manpower to become a sustainable community.” in addition to all of the above, 42 Raptor engines would complete Musk’s fascinating plan.

As you can see, it seems that Musk has it all figured out. The man behind SpaceX wants us to go to Mars and wants us to make it possible in this generation. Musk says that we must become a multi-planetary civilization if we do not want to become extinct on Earth. In order to become a “multi-planetary” civilization, the first step is to build a city on Mars, a place that has the right conditions for establishing a colony.

“Someday soon, there will be an extinction event on Earth,” Musk said. So we can either sit around and wait for that to hit. “Or, the alternative is to become a spacefaring species.”

This image illustrates how exactly SpaceX wants to take us to Mars: 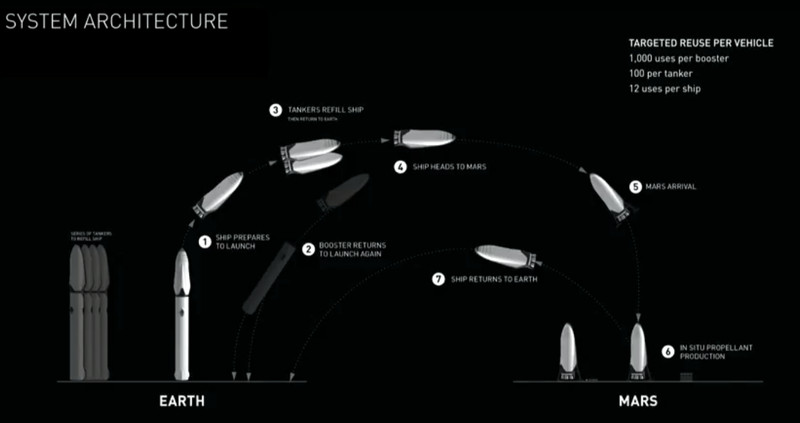 However, one of the problems that we face as a spacefaring civilization is the cost associated with the mission. According to Musk, with conventional technology,  landing a man on Mars would cost about $ 10 billion.

“You can’t create a self-sustaining civilization if the ticket price is $10 billion a person.”

“If we can get the cost to moving to Mars roughly equivalent to the median house price in the US, which is around $200,000, then the probability of establishing a self-sustaining civilization is pretty high,” he said.

“We have to figure out how to improve the cost to [traveling to Mars] by 5 million percent,” Musk said. “This is not easy.”

“The ship goes to Mars, gets replenished, and then returns to Earth,” he says. There would be maybe a thousand ships in orbit at once. “Kind of like Battlestar Galactica,” he says.

So what about fuel on Mars? Well, Musk was actually very clear: to bring materials from Earth would increase the cost per launch, which ultimately makes the price of traveling to Mars over $ 200,000. So what should we do? According to Musk Methane is the answer. Methane is much more suitable than kerosene or hydrogen and could be the ultimate replacement we are looking for.

“Producing propellant on Mars is obviously important,” he explained. “It would be pretty absurd to try to build a city on Mars if your spaceships kept staying on Mars. You would have this massive graveyard of ships.”

But we don’t just want to get to Mars, we want to terraform it

Interestingly, Musk also talked about Mars as a planet and how we should look to make it more optimal for humans. What does that mean? It’s simple: TERRAFORMING. WE can actually terraform the red planet by releasing massive amounts of carbon dioxide into the atmosphere which would eventually make the red planet heat up, and bring back more liquid water to the surface of Mars, which in turn would make it more habitable for humans.

“If we could warm Mars up, we would once again have a thick atmosphere and warm oceans,” he said.