Elongated Skulls are a global phenomenon. All across the planet researchers have discovered traces of mysterious elongated skulls that defy explanation and reason.

Many refer to these discoveries as forbidden archaeology, while others believe they are part of mankind’s forbidden history.

But why forbidden history? Because the bizarre and extraordinary subject of cranial deformation has been completely avoided by mainstream scholars who refuse to search on and get to the bottom of it.

Why did ancient cultures around the globe practice a procedure by which they artificially created elongated human skulls? Did they come up with this idea on their own? Or was an external influence present, thousands of years ago which lead people from Asia, the Americas and other parts of the world to practice such a bizarre procedure?

The elongated skulls phenomenon is not isolated, evidence of this are the countless skulls that have been discovered in all corners of the globe.

It’s as if people from around the globe saw some sort of advanced and sophisticated race, thousands of years ago, and decided to mimic their looks and behavior.

The head binding phenomenon has become one of the most puzzling subjects for archaeologists around the globe who seem to avoid, at all cost, exploring the tens of thousands of elongated skulls discovered around the globe: Mexico, Peru, Bolivia, Egypt and even parts of Asia.

Believed to be around 3,000 years old, DNA tests have revealed fascinating results suggesting they did not come from humans, but a completely new species. 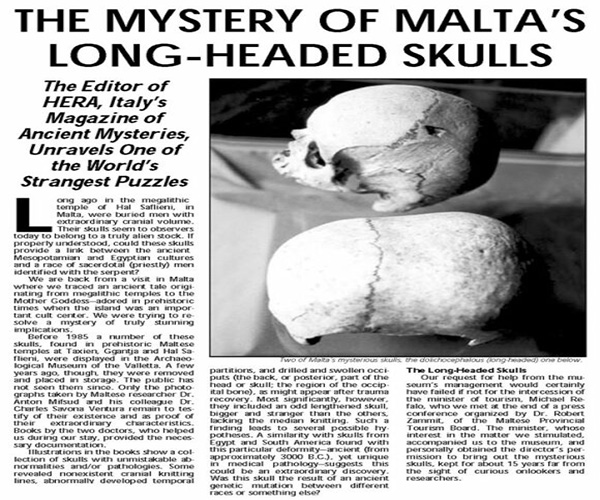 “Whatever the sample labeled 3A has come from – it had mtDNA with mutations unknown in any human, primate or animal known so far. The data are very sketchy though, and a LOT of sequencing still needs to be done to recover the complete mtDNA sequence. But a few fragments I was able to sequence from this sample 3A indicate that if these mutations will hold we are dealing with a new human-like creature, very distant from Homo sapiens, Neanderthals, and Denisovans. I am not sure it will even fit into the known evolutionary tree. The question is if they were so different, they could not interbreed with humans. Breeding within their small population. They may have degenerated due to inbreeding. That would explain buried children – they were either low or not viable” –Brien Foerster

But the Paracas skulls are anything but ordinary.

In fact, researchers have concluded that the cranial volume of the “Paracas Skulls” is up to 25% larger and 60% heavier than conventional human skulls. And there is more to the mysterious skulls.

The human skull is composed of two parietal bones located between the frontal and occipital, forming the sides of the calvaria. The calvaria or also called skullcap is made up of the superior portions of the frontal bone, occipital bone, and parietal bones. The “Paracas Skulls” only have one.

It has become evident that for us to understand the truth behind the elongated skulls phenomenon, we need to exit our comfort zone and look at science, history and the origins of mankind from a completely different point of view, not influenced my mainstream dogmas and patterns. Only then, will we understand the history and life of ancient cultures that inhabited our planet thousands of years ago.