Divers recovered a sample of the so-called anomaly to the surface, and lab tests reportedly found it to contain limonite and goethite. A geologist claimed that these materials are “metals which nature could not reproduce itself”. Furthermore, divers say that “Anything electric out there – and the satellite phone as well – stopped working when we were above the object.” 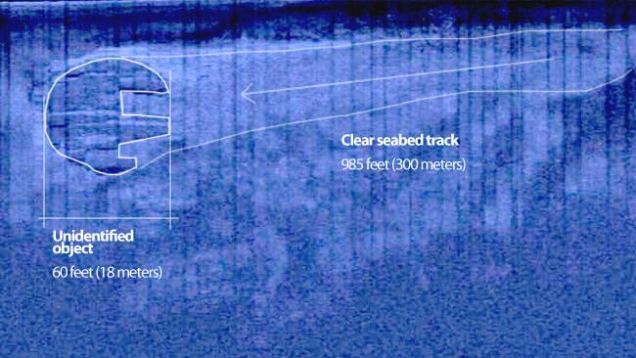 The Baltic Sea Anomaly is perhaps one of the most mysterious underwater discoveries in recent years.

The ‘anomaly’ was detected on June 19, 2011, by the Swedish-based “Ocean X Team” during a dive in the Baltic Sea between Sweden and Finland while searching for an old shipwreck. Ever since the anomaly was spotted, countless theories have emerged trying to explain what the heck this mystery objects is.

A year after discovering the object, the team decided to explore the anomaly more, and clarify the mystery behind the so-called submerged UFO. However, the group surfaced with more questions than answers.

“I cannot explain what we saw, I went there looking for answers, but I came up with even more questions,” said Stefan Hogeborn, one of Ocean X divers in 2012.

“During my 20-year diving career, including 6,000 dives, I have never seen anything like this. Normally stones don’t burn,” Mr. Hogeborn said in a press release.

‘We’ve heard lots of different kinds of explanations, from George Lucas’s spaceship – the Millennium Falcon – to “it’s some kind of plug to the inner world,” like it should be hell down there or something,’ diver Peter Lindberg said in a press release.

Over the last few years, the discovery has generated hypotheses of all kinds.

While some say it could be the remains of a meteorite or a warship, several media outlets and ufologists believe it might be a flying saucer.

The most skeptical, on the other hand, believe that all research is a farce and is part of a viral marketing campaign, i.e. an advertising trick of Ocean X to try to raise money that would help them in other projects related to the search for lost treasures.

Interestingly, after Ocean X recovered a sample of the so-called anomaly to the surface, it was reportedly found to contain limonite and goethite. Israeli geologist Steve Weiner claimed that these materials are “metals which nature could not reproduce itself” (Source)

Furthermore, if the metals weren’t strange enough, Stefan Hogerborn, part of the Ocean X team said that their equipment stops working when they approach the Baltic Sea Anomaly within 200m.

He is quoted as saying: “Anything electric out there – and the satellite phone as well – stopped working when we were above the object.”

“And then we got away about 200 meters and it turned on again, and when we got back over the object it didn’t work.”

Diver Peter Lindberg said: “We have experienced things that I really couldn’t imagine and I have been the team’s biggest skeptic regarding these different kinds of theories.”

“I was kind of prepared just to find a stone or cliff or outcrop or pile of mud but it was nothing like that, so for me, it has been a missing experience I must say.”

Ocean X Member Dennis Åsberg said: “I am one hundred percent convinced and confident that we have found something that is very, very, very unique.”

“Then if it is a meteorite or an asteroid, or a volcano, or a base from, say, a U-boat from the Cold War which has manufactured and placed there – or if it is a UFO…”

“Well, honestly it has to be something.”

The quotes were first reported at NDTV.

However, other experts—like Fredrik Klingberg and Martin Jakobsson—disagree and suggest that the chemical composition of the sample resembles that of nodules that are not uncommon in sea beds, and that the materials found, including limonite and goethite, can indeed be formed by nature itself.

Geology professor Volker Brüchert suggests that the Baltic Sea Anomaly is most likely a glacial deposit. Glaciers that formed near the Baltic Sea would have transported this formation from its place of origin. In a similar way to numerous balancing stones that are found at the top of many mountains.