Elon Musk seems to have taken a swing at Flat Earth believers by sending a tweet saying  ‘Why is there no Flat Mars Society?!’ Promptly, the so-called ‘Flat Earth Society’ answered Musk by saying that ‘unlike Earth, Mars has been observed to be round’, leaving many social network users stunned by the claims.

The Flat Earth Society, which by the way is a ‘verified’ Twitter account represents many people who cling to the idea that our planet is not a globe, but a flat plane.

The tweet made by the ‘Flat Earth Society’ has left many confused, who was unable to answer the question, if Mars is round, how come Earth isn’t?

The tweets by Musk and the FES was promptly picked up and shared by thousands of users across social networks who jumped into the conversation, debating whether or not our planet is ‘flat’. 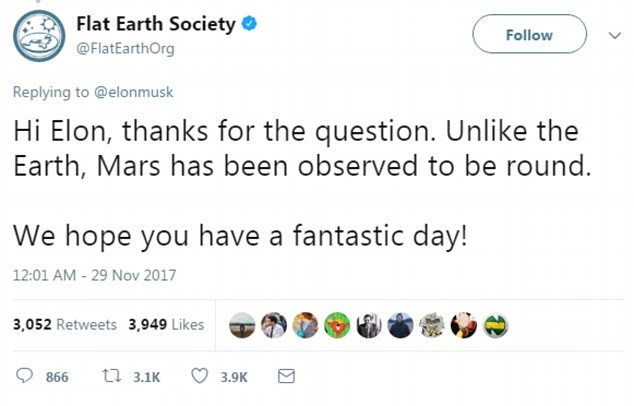 As it was expected, many users joked about the statement made by the Flat Earth society.

One user, called ‘George’ tweeted saying: ‘I heard your society has members all AROUND the globe. Is this true?’

Others joined in saying: ‘1. Earth HAS been observed to be round. 2. Why would the laws of physics create one planet round and the other flat? 3. You guys are just trolling us, right?’

All jokes aside, the Flat Earth theory seems to have become quite popular these days as there are many who firmly believe our planet is not a spheroid.

Flat Earth theorists argue that our planet is shaped like a ‘flat’ disc, instead of a sphere. The theory proposes that the arctic circle is located in the ‘center’ of the disc, with Antarctica acting as a massive 45-meter tall wall of ice, surrounding the flat disc.

Furthermore, those who believe in the Flat Earth theory do not acknowledge ‘modern astronomy’ and claim that Earth is in fact ‘stationary’ in space, and does not orbit the sun.

To understand just how popular the Flat Earth theory has become, we need only look back at 2017’s first Flat Earth International Conference which was held in America.

Hundreds of Flat Earthers gathered from around the ‘globe’ in order to meet like-minded people and discuss the Flat Earth theory among them.

In ancient times, there were authors who argued that the Earth was flat and others who claimed it was cylindrical in shape.

Among Greek philosophers, Thales of Miletus sustained the idea of a flat Earth.

For his part, Anaximander believed that the Earth was a short cylinder with a flat, circular surface.

In the time of Pliny the Elder, in the first century, most Western scholars accepted that the Earth was spherical in shape.

More or less by then, Claudius Ptolemy derived his maps from a curved globe and developed the system of latitude, longitude, and climates.

His writings later became the basis of European astronomy during the Middle Ages, although late antiquity and the Middle Ages saw occasional arguments in favor of a flat Earth.

In Chaldean mythology, the world is represented as a round, flat disk floating in the ocean, and that formed the premise for the first Greek maps, such as those of Anaximander and Hecateus of Miletus.