Is Gunung Padang the oldest pyramid on the planet?

Not until February 2012, however, was a State-sponsored evaluation of the site carried out, when thorough radiocarbon testing revealed it was built and first occupied about 4,800 years ago. As the researchers were carrying out their investigations, they noticed traces on Mount Padang’s surface of underground structures. 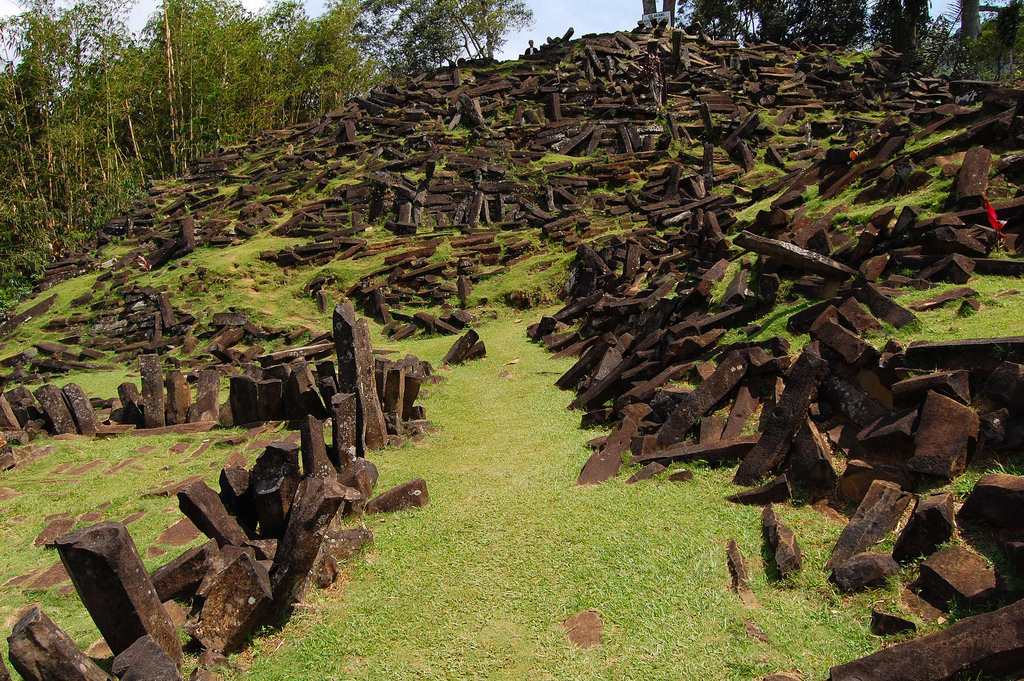 The President of Indonesia himself, Susilo Bambang Yudhoyono, lavished the archaeologists with costly GSSI and Multi-Channel SuperSting R-8 ground-penetrating radar units, plus GEM-Ovenhausser geo-magnetometers. These state-of-the-art instruments readily found and accurately confirmed the existence of large and small chambers, walls, gates and staircases buried deep beneath the often-visited, open-air ruins.”

The Jakarta Post announced on 5 November: “A recent analysis of carbon-dating by the Miami-based Beta Analytic Lab has apparently validated findings by a government-sanctioned team that a man-made structure lies buried under Mount Padang in Cianjur, West Java. The lab used samples of sand, soil and charcoal found at a depth of between three and twelve metres beneath the mountain’s surface.

Based on geo-electric, geo-radar and geo-magnetic [surveys], a large chamber is buried at least up to fifteen meters from the surface… Carbon-dating test results from the Miami lab show that the structure could date back to 14,000 B.C., or beyond.” The significance of this discovery cannot be over-stated, because it crosses the Ice Age event horizon.

“At 7,000 or more years older than Stonehenge the megaliths of Gobekli Tepe, like the deeply buried megaliths of Gunung Padang mean that the timeline of history taught in our schools and universities for the best part of the last hundred years can no longer stand. It is beginning to look as though civilization, as I argued in my controversial 1995 bestseller Fingerprints of the Gods, is indeed much older and much more mysterious than we thought.” ~ Graham Hancock.

“Gunung Padang is not a natural hill but a man-made pyramid and the origins of construction here go back long before the end of the last Ice Age. Since the work is massive even at the deepest levels, and bears witness to the kinds of sophisticated construction skills that were deployed to build the pyramids of Egypt or the largest megalithic sites of Europe, I can only conclude that we’re looking at the work of a lost civilization and a fairly advanced one. ” ~ Dr. Danny Natawidjaja.

The site was first mentioned in 1914, when it appeared in Rapporten van de Oudheidkundige Dienst (ROD, “Report of the Department of Antiquities”). It is mentioned again in 1949, within the work of Dutch historian N. J. Krom, although it was not until 1979 that members of the National Archeology Research Centre made a careful examination of its history, archaeology, and geology.

Conventionally, archaeologists and historians place the construction of Gunung Padang’s megalithic structures firmly within the Bronze Age, ca. 2500-1500 BC. However, geological surveys conducted at the site since 2011 by Indonesian geologist Danny Hilman Natawidjaja of the Indonesian Centre for Geotechnical Research suggest the monument is much older – much older indeed.

Core drilling samples and other exploratory excavations have uncovered evidence that Gunung Padang is a multi-leveled structure, one phase being built on top of the next, with evidence of activity on the hill at 22,000-20,000 BC, 14,700 BC, 9,600 BC, 4700 BC and 2800 BC, the final date being the age of the megalithic structures visible today. Indeed, Danny Hilman and his team now believe that the entire hill is an artificial pyramid of incredible antiquity. If correct, this would make it the oldest built structure anywhere in the world. The ranges of dates cited above derive from carbon-14 testing of organic materials taken from core drilling samples extracted from a series of different depths.

Further evidence of the artificial construction of the hill comes from the fact that Danny Hilman and his team have uncovered series of andesite pillars laid down in rows beneath the surface of the hill, and since andesitic pillars are only ever created vertically, never horizontally, it means they must form part of an artificial construction (often these andesitic, i.e. basaltic, columnar pillars are six-sided in profile due to the rapid cooling process involved in their manufacture. See, for example, those making up the Giant’s Causeway in Ireland. Those at Gunung Padang are more irregular in profile).

With the prospect that Gunung Padang’s megalithic complex is in fact a stepped pyramid as much as 12,000 years older than Göbekli Tepe I felt the matter was definitely worth investigating further. Yet having not had a chance to visit Gudung Padang myself (I hope to go there next year), it is difficult to offer any constructive comments regarding the hill’s proposed greater antiquity and apparent artificial construction. However, if the radiocarbon dates can be shown to relate to human activity, and are not simply the result of natural sediment accumulation on the hill slopes, it is feasible that they are the result of Paleolithic peoples occupying or visiting a natural cave site located at the heart of the structure. Indeed, it might well be possible that the megalithic complex was built to surround an existing cave sanctuary of immense antiquity (the exploration of caves and rock shelters in eastern Java revealed evidence of occupation during the Upper Palaeolithic age, approximately between 40,000 years ago and 15,000 years ago, see Peregrine and Ember, 2001, 308).

Danny agrees with this theory. 3D geo-electric, geo-magnetic and geo-radar surveys have revealed the presence of a hollow chamber 10 metres in width, height and length at a depth beneath the hill of approximately 25 metres. It apparently even has two doors in its hallway. He adds that the existence of this suspected cave chamber was the most likely impetus behind the construction of the multi-layered pyramid structure as early as the Upper Palaeolithic age. This is supported by the organic samples extracted from this great depth, which have produced radiocarbon dates in the range of 22,000-20,000 BC. Obviously, Danny is anxious to explore these hollow cavities, although he must first gain permission from the correct authorities to continue his exploration of the site (there is considerable opposition against his explorations continuing at Gunung Padang. Local people have protested using banners and placards, raising political and religious issues that the Javanese government must address before the state-sponsored survey can continue).

Rodney Hale did look at potential astronomical alignments based on Gudung Padang’s proposed axis of 342º (that is, toward the main Gede crater), and, using the proposed radiocarbon dates offered by the recent geological surveys, found the following possible ground-sky correlations:

*In Indonesian star-lore Ursa Major is a constellation of some importance known as Bintang Biduk, which means “Biduk star.” A biduk is a boat or canoe (see below).

In Indonesian star-lore the constellation of Ursa Major was known as Bintang Biduk, the “Biduk star”. A biduk is a boat or canoe, like those in the photograph on the left, which shows an Igorot tribesman next to wooden “biduk,” in this case canoes. The first ancestors of the Toraja people of Indonesia were said to have descended from the sky. Other traditions have them arriving by boat from the north, the two stories becoming inextricably weaved together over time. Even today the Toraja build saddle-roofed houses to emulate the boats in which the sky gods first arrived from the stars.

The problem with all these ground-sky correlations is that they are meaningless until Gudung Padang’s exact age of construction can be established with absolute certainty. This can come only from a full excavation of the site, something that might hopefully reveal evidence of the material culture behind the construction of Gudung Padang. If, as claimed, the site does date back to the Upper Paleolithic age, ca. 22,000-9500 BC, then its builders will have left behind masses of stone tools made, used and discarded during the creation process at the site. We see this at terminal Paleolithic, or proto Neolithic sites, such as Göbekli Tepe and Karahan Tepe, where even to this day thousands of stone tool fragments lay scattered about.

Tens of thousands (possibly even millions) of stone tools were found also in the famous 50,000-year-old haematite mines of Bomvu Ridge in the Ngwenya massif of Swaziland. It is the same everywhere you go, right the way back to the earliest settlements at Oldavui Gorge in Tanzania. As early as two million years ago our ancestors were discarding inordinate amounts of worked stone tools, which provide an accurate means of dating a site contextually. So far no Paleolithic stone tools have been found at Gunung Padang. When they are, this will help settle the debate once and for all regarding the greater antiquity of this amazing place, which, I suspect, is going to be the subject of controversy and debate for some years to come.

A device which is similar to a hydroelectric power plant reactors in layer 25.000 BC

Research at Mount Padang is Done, Researchers Find Something ‘Special’

Jakarta – Independent Integrated Research Team (TTRM) Gunung Padang have finished doing the initial research. A number of samples have been studied and prepared for the report. They reported found something special.

Erick Rizky, TTRM members said, the report results of research in Gunung Padang will then be reported to the President, several ministries, local government of West Java and local government regency of Cianjur . Of the report, the research will be continued by the state.

The research team found four layers in Mount Padang. According to Erick, layers 1 and 2 will be followed up by the Ministry of Education Culture or the Government. While the other two layers, called very special, to be determined by the president.

“While the layers 3 and 4 are ‘very special’ and ‘the only one in this world’ seems not Ministry of Education Culture region. Whether the defense ministry, or the ministry of Energy and Mineral Resources, or maybe the National Guards, will be handed over everything to the direction of the President,” said Erick in a release told AFP on Wednesday (09/11/2013).

What the special findings is? Based on the analysis of a number of published findings, allegedly a special technology tucked beneath layers of mount padang. Previously, the researchers found a chamber or room, giant bowls, rivers and springs, domes, towers, aquifer and transmitter. Magnetic anomalies are also found in these locations.

These findings point to a device which is similar to a hydroelectric power plant reactors.

President’s special staff Andi Arief is also part of the research team said, it is true there are a number of findings in Mount Padang. But he did not want to give details of what information the special building is.

“Culture of layer 1 and 2 are excavated by ali akbar’s team. Layer 3 and 4 is it true a reactors just like analyzed, I need to ask the researchers more detail. Many parties are asking the same thing.” he told reporters when asked for confirmation.

“I can not precede the conclusion of researchers. I just could make sure the content is an advanced technology,” he continued.

Research on site of Gunung Padang is indeed invited the attention of many parties. When discussed, this site is associated with the pyramids. While many would call Mount Padang’s model just similar to site on Machupichu.

The study was conducted independently integrated team consisting of various experts. What actually the contents of the mountain is? The Report of the researchers will answer it. – http://news.detik.com/ 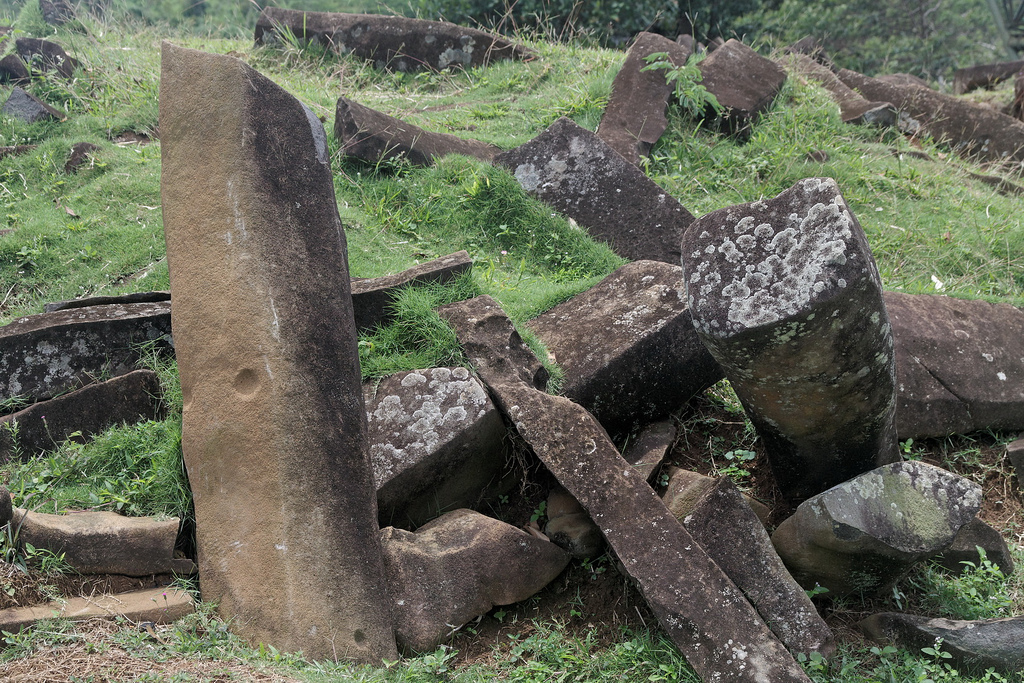 This article is a compilation of several documents including the report of Andrew Collins, you can read more about this interesting finding by visiting this link