‘Heat Anomaly’ inside Great Pyramid could be a unknown chamber

The ScanPyramid project will certainly offer never before seen information about the construction of the Pyramids of Egypt. One of the most important findings so far are the temperature anomalies found at the Great Pyramid of Giza, which, according to researchers, could lead into a previously unknown chamber inside the Pyramid. 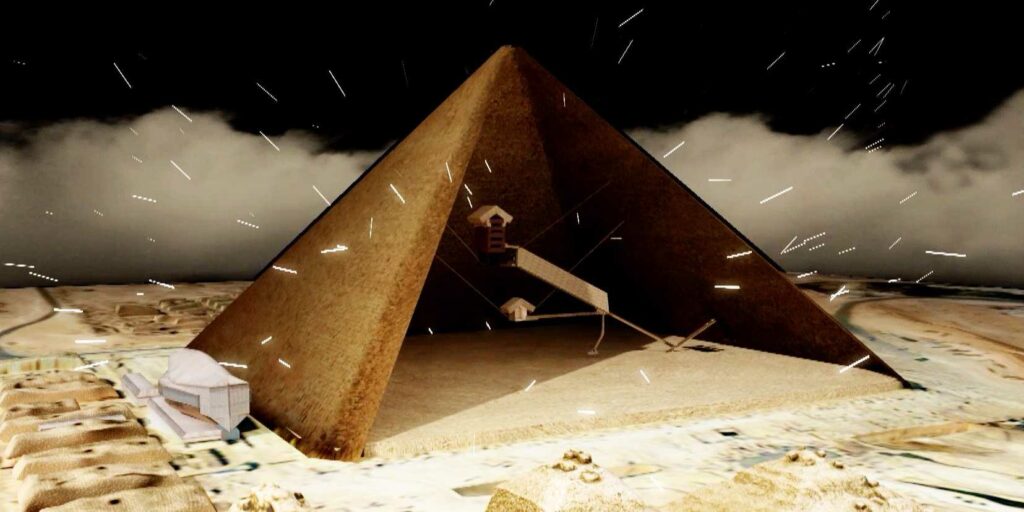 One of the most important discoveries made so far is an abnormal ‘heat difference’ in the blocks at the Great Pyramid. The international team of researchers is composed of scientists from Egypt, France, Canada and Japan and was launched last October by the Egyptian Antiquities Ministry. Researchers are using never-before-seen technology like infrared thermography which will allow them to scan and map the pyramids.

Among the most impressive discoveries so far were the thermal anomalies found which indicate some of the limestone blocks that make up the pyramid are hotter than others.

“The teams have concluded the existence of several thermal anomalies that were observed in all monuments during the heating up or the cooling down phases,” the statement said, as cited by AFP. “To explain such anomalies a lot of hypothesis and possibilities could be drawn up: a presence of voids behind the surface, internal air currents.”

According to researchers, the equipment used by researchers has detected thermal ‘points of interest’ in the northern facade of the Great Pyramid at Giza, commonly referred to as The Great Pyramid of Khufu or Cheops. Scan Pyramids uses a mixture of innovative and new technologies such as infrared thermography, muon radiography, and 3-D reconstruction in order to identify the presence of unknown internal structures of the Pyramids. The use of infrared thermography has allowed researchers to identify several anomalous spots at the Great Pyramid of Giza where temperature spikes were registered. Furthermore, the “scanning” with infrared technology also allowed experts to identify three hot spots in the middle of the pyramid, which also have a higher temperature than the rest of the blocks.

The ScanPyramids project recently issued an updated presenting results of Muography tests performed from the layered pyramid in Dahshur, 40 kilometers south of Cairo: „for the first time ever, the internal structure of a pyramid was revealed with muon particles. The images obtained indeed show the second chamber of the pyramid, located roughly 18 meters above the lower one in which emulsions plates were installed. The available statistics from the 40 days of exposure is not yet sufficient to precisely reveal the known corridors. However, various simulations were performed by randomly placing, within the field of view, a hypothetic chamber of a size similar or larger than the upper one. Compared with the results obtained by the Japanese team, these simulations could validate the fact there is no additional chamber of this size in the surroundings.“

The ScanPyramid project will continue until the end of 2016. Until then, researchers expect to uncover the mysteries of the ancient Egyptian Pyramids and their purpose.