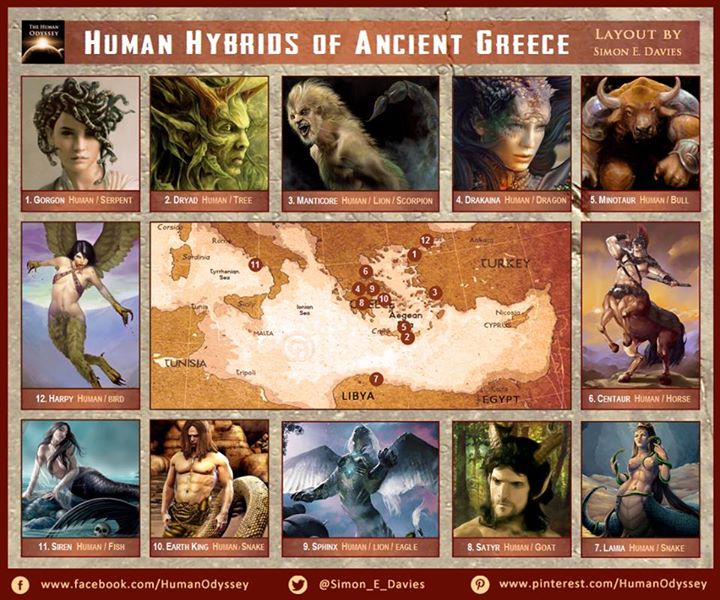 The Greeks adapted many of the monsters in their legends from the near east influences. However, it can be argued that their depiction of these fabulous beasts are among the most iconic and unique in world mythology.

Some of the most formidable beasts were known as hybrids (part human and part animal). Hybrids combined the savagery of nature with the intelligence of humans, making them powerful allies or deadly foes. The following list details some of the most notable hybrids of ancient Greece, and their roles in mythology:

The Gorgons were three horrifying sisters with broad faces, and piercing eyes (some depictions even say they had flaring nostrils, yellowed tusks and protruding tongues). Their heads were wreathed in snakes, and one look from a Gorgon’s eyes would turn a man to stone. Perseus killed Medusa, one of the Gorgon sisters, by beheading the beast while looking at her reflection in his shield.

Dryads were tree spirits, typically associated with oak trees. They were said to have been born from the trees in the Silver Age of Greece, and possessed bark like features. While the tree flourished, so did its resident nymph, but when it died she passed away with it. They were normally considered to be very shy creatures, except around the goddess Artemis, who was known to be a friend of the nymphs.

The Manticore, a beast which originated from Persia, was described by the Greek physician Ctesias in one of his memoirs. He claimed to have seen one on his travels in India, describing it as having the head of a man, the body of a lion and the tail of a scorpion. Legend says it had three rows of sharp teeth and its tail could shoot venomous spines to paralyze or kill its victims. It devoured its prey whole and left no clothes, bones, or possessions.

The Drakaina were part woman, and part dragon. Sometimes they were depicted as having a woman’s head and torso, with the hind-quarters of a dragon or snake. They were among the most deadly of monsters in Greek mythology, often used as guardians of sacred places. Campe (guardian of Tartarus), Delphyne (guardian of the oracle) and Echidna (known as the mother of monsters because the majority of monsters in Greek myth were her offspring) were the most notorious.

The Minotaur was a man-eating beast with the head of a bull and the body of a man. King Minos kept it hidden in a labyrinth in Knossos, where he used it to frighten his enemies. Legend says the Minotaur was created by Poseidon to punish king Minos for an improper sacrifice. He made Pasiphaë (Minos’ wife) fall in love with a white bull, and together they sired the Minotaur. Eventually, the Greek hero Theseus killed this abomination on one of his adventures.

The centaurs were one of the most civilised hybrid races, but even they were known to be heavy drinkers, reverting to coarseness and savagery. They had the head, arms, and torso of a human and the lower body of a horse. Chiron was one of the most popular centaurs in Greek mythology. He stands in contrast to the typical depiction of centaurs being indulgent and violent drinkers with his intelligence and enviable medical skills.

The Lamia were vamparic women with a taste for blood. Their race originated in Ancient Libya, based on a beautiful queen Lamia who became a child-eating daemon. Hera (Zeus’ wife) killed all of Lamia’s children out of spite, after finding out that she had slept with her husband. Lamia’s grief at the death of her children caused her to turn into a monster who took revenge on all mothers by hunting down and devouring their children. Many accounts say these daemons had snake’s coils in place of legs.

Satyrs are a troop of male spirits who have goat-like features. They were described as having human bodies, with the hindquarters and horns of a goat. They were often found following Dionysus, the god of feasting. They roamed the woods and mountains, playing on their flutes and drinking copious amounts of wine. They epitomize the essence of having a carefree life as they make music and drink all their days away.

The sphinx of Ancient Greece was said to have a woman’s head, a lion’s body, and the wings of a great eagle. Legend says she terrorized travellers by demanding them answer a riddle. It went “what has one voice and yet becomes four-footed and two-footed and three-footed”? Those who could not answer were devoured. Eventually the Greek hero Oedipus gave the proper answer: “it is man, for he crawls on all fours in infancy, walks on two feet when grown, and leans on a staff in old age”. Bested at last, the Sphinx threw herself from her high rock to her death.

The Earth Kings were an ancient race who had human heads and torsos, but serpentine coils in place of legs. The most famous of the Earth Kings was Cecrops I, a mythical king of Athens who reigned for fifty years, and was said to have been born from the earth itself. He was preceded in the region by the earth-king Actaeus of Attica (also said to have been born from the Earth). These founding figures were heroes of Greece, who taught their people marriage, reading, writing, and ceremonial burial.

The Sirens have been depicted as either half woman half bird (in ancient Greece), or half woman and half fish (in Hellenistic Greece). They lived on rocks by the sea, where their beautiful singing lured sailors to their deaths (wrecking their ships on their rocks). Odysseus filled his sailors’ ears with wax so that they might sail safely past the Sirens haunting laments.

Harpies were winged spirits, known for their proclivity for stealing food. Zeus used them to punish a king called Phineus by trapping him on an island with buffet and a large group of harpies, thus preventing him from ever eating as the food was always stolen away. These winged monsters had the bodies of birds and the heads and torsos of women.

For the Greeks, these monsters embodied a fear of chaos. Many of the tales speak of dark and malevolent creatures being conquered by gods and mortals, the forces of order, reason and civilisation.