Is this what Planet X, aka Planet Nine looks like?

A pair of planet evolution experts suggest the temperature of Planet Nine would be as low as -226 degrees Celsius and the planet’s outer parts by consist of water ice and a hydrogen/helium ‘envelope,’ which is why we are having a hard time locating the planet in the sky.

According to researchers, Planet Nine might be a mysterious frozen world, much bigger than Earth, which temperatures that dip to -226 degrees. Scientists speculate that the elusive world would have an iron core surrounded by a silicate mantle and the planet’s outer parts by consist of water ice and a hydrogen/helium ‘envelope,’ which is why we are having a hard time locating the planet in the sky.

Conclusive evidence supporting the existence of the enigmatic ‘Planet X’ or Planet Nine as it has been dubbed recently could be found in the next months which would lead scientists to finally discovering the elusive planet by the end of the year. Researchers are now using Dar Energy Survey data to identify the abnormal object ‘tugging’ on NASA’s Cassini spacecraft. However, even before spotting the mysterious planet, researchers believe they know what the elusive celestial body is made of.

A pair astrophysicists have composed a detailed model of what they think, Planet Nine is made of, if of course, the planet exists. Scientists estimate that Planet X, or Planet Nine as it has been dubbed recently, is, in fact, a smaller ‘ice-giant’ with a radius approximately four times that of Earth. The model of Planet Nine created by researchers is based on the assumption that the elusive planet is a smaller version of Uranus or Neptune.

According to previous studies, the enigmatic planet is believed to be the equivalent of 10 times the mass of Earth, suggesting that its approximate radius is around 3.7 times that of our planet. 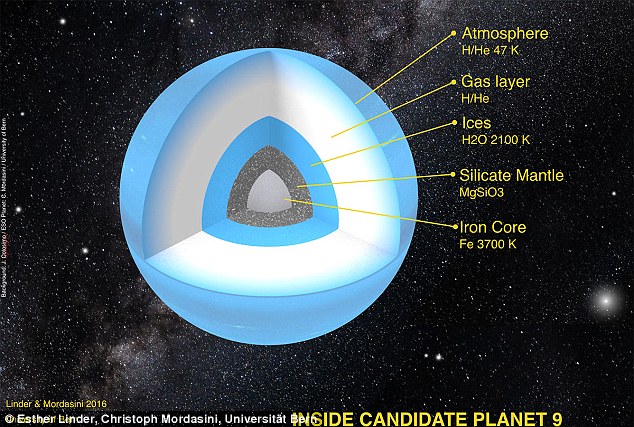 Earlier this year, astronomers at the California Institute of Technology announced new evidence directly supporting the existence of a giant planet lurking the edge of our solar system, far beyond of the Pluto. They have called it “Planet Nine.” The enigmatic Planet (X) orbits our sun at such a distance that it needs between 10,000 – 20,000 years to complete a single orbit around it.

The authors, of the study Michael Brown and Konstantin Batygin, suggest that the smaller bodies located on the edges of the solar system appear to be influenced by the gravity of a hidden planet – a “massive perturber.”

Now, according to two planet-evolution experts of Switzerland, new results explain why we still have not discovered Planet Nine, and they suggest that telescopes like the Large Synoptic Survey Telescope in Chile might help us find out whether or not the elusive planet is real.

‘For me candidate Planet 9 is a close object, although it is about 700 times further away as the distance between the Earth and the Sun,’ says Esther Linder, a Ph.D. student at the University of Bern, who typically investigates the formation of young exoplanets.

According to estimates, the temperature of Planet Nine would be as low as -226 degrees Celsius.

‘This means that the planet’s emission is dominated by the cooling of its core. Otherwise, the temperature would only be 10 Kelvin,’ explains Linder.

‘Its intrinsic power is about 1000 times bigger than its absorbed power.’