Lakes and vegetation found on the surface of Mars?

Fascinating images beamed back from the Red Planet show what anomaly hunters are calling the ultimate proof of lakes and ‘alien’ vegetation on the surface of Mars. Is it possible that we are not being shown the entire picture when it comes to Mars? 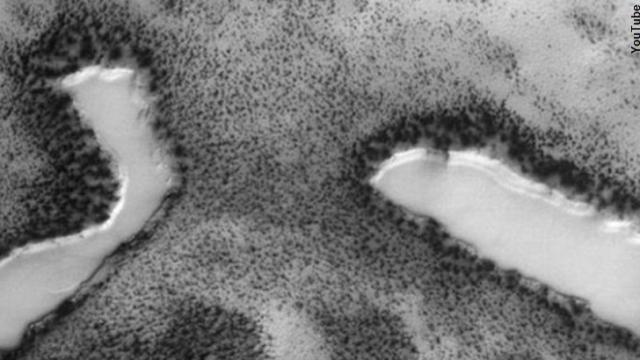 Mars has been one of the most fascinating planets in our solar system for centuries. But in the last couple of years, interest on Mars has risen exponentially. This is mostly because of the numerous discoveries that have been made on the surface of the red planet. The only thing still ‘not found’ on Mars is life. NASA researchers have detected traces of oxygen on Mars, water, Methane and some other elements which scream out: there could be life on Mars.

Putting aside the official discoveries from the red planet, we turn to Anomaly hunters who search through NASA’s online archives trying to offer a different perspective on the red planet. Many of them had found incredible structures which seemingly point out ancient civilizations inhabited the red planet millions of years ago when Mars was eerily similar to Earth.

But the biggest question since if Mars had life in the past, the greater question many are asking is whether there is life on Mars NOW?

A fascinating image was taken by NASA Mars Reconnaissance Orbiter, which seems to show what undoubtedly look like bodies of water surrounded by what many believe are some sort of ‘vegetation’ resembling trees.

Even though NASA has made official statements saying there are ‘small traces of liquid water’ on the red planet, anomaly hunters argue that water on Mars is far more abundant than what the space agency is willing to admit.

However, not everyone seems to agree that there is abundant water on Mars. Other researchers claim that the mysterious oddities are not water but other liquid elements on the surface of the red planet.

The possibility that intelligent beings inhabited Mars is stronger than ever, and if you think about it… they might have existed millions of years ago. In fact, a number of researchers believe Mars once home to advanced alien cultures.

If Mars had an atmosphere similar to Earth in the past, if it had liquid water flowing through rivers, lakes, and oceans… it’s only logical to suggest that the planet could have been inhabited, if it was inhabited there is the possibility that intelligent life developed, and if intelligent life did develop on Mars, then the possibility that these structures are evidence of that is a strong case in the debate between Ufologists and skeptics.

But the fact that there appear to be traces of lakes and rivers on Mars today offers a strong argument that alien lifeforms could still inhabit the planet today. The only way to know this for sure is by sending humans to the red planet, a mission that is eagerly anticipated by all mankind.

Once the first astronaut sets foot on Mars, everything will change, as our search for alien lifeforms will have officially started tackling the idea that alien life exists in our solar system like never before.

However, not everyone needs physical proof of ‘alien life’. One of the most important and influential quotes about alien life and the UFO phenomenon comes from Dr. Brian O’Leary, Former NASA Astronaut, and Princeton Physics Professor, who said: “There is abundant evidence that we are being contacted, that civilizations have been contacting us for a very long time.”

The UFO phenomenon, however, is not an isolated event only seen on planet Earth. While there are millions of people around the globe who claim to have seen objects in the sky that defy explanation, astronauts in space have witnessed incredible things in the last decades.

One of the most fascinating statements about Mars was made when General Stubblebine said:

So, take a look at these images from Mars and let us know what you think, and don’t forget to stop by the Facebook group Mars Anomaly Research Society and.