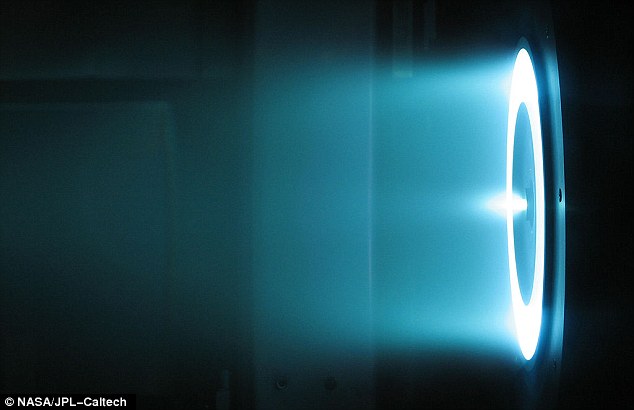 According to leaked NASA documents, the ‘impossible’ fuel-free engine that could take mankind to Mars in just 10 weeks WORKS. According to researchers, the revolutionary engine creates thrust by ‘bouncing’ microwaves in a closed chamber and is powered by solar energy.

The possibility of a space engine that does not require fuel –it actually transforms electricity into impulse by moving microwaves inside an enclosed chamber – seems to be closer than ever thanks to leaked NASA documents.

Not long ago, several independent laboratories concluded that somehow, the ‘impossible’ fuel-free engine called EmDrive that could transport astronauts to Mars in just 10 weeks works, even though no one known how or why it works.

The revolutionary engine creates thrust by bouncing microwaves in a closed chamber and is powered by solar energy.

The engine that has been dubbed as impossible since it defies everything we thought we knew about physics has created quite a buzz in the last couple of months. Now, leaked papers claim the groundbreaking engine that could take mankind to Mars actually works.

A source close to Eagleworks Laboratories –a propulsion development group that works with the US space agency— has apparently revealed a preliminary draft of the eagerly anticipated peer-reviewed study showing that researchers obtained a force of 1, 2 millinewtons per kilowatt in a vacuum after discarding any measurement errors.

The document was leaked in a tech enthusiasts forum at NASA Spaceflight on November 5 by a fan of the EmDrive named Phil Wilson Australian, nicknamed “The Traveler.”

The moderators of the forum decided to delete the post since the article has not yet been published. It is scheduled to be published by the American Institute of Aeronautics and Astronautics (AIAA) in December.

However, that didn’t stop technology news site Next Big Future to publish the document and upload diagrams of it, thus ensuring that the content is now, irrevocably, in the public domain, reports IBTimes UK.

The leaked documents indicate that NASA succeeded in replicating the work of British engineer and scientist Roger Shawyer in 2006 who managed to produce rotating propellers demonstrating that the controversial device obeys in fact Newton’s Laws of Motion.

NASAs Eagleworks Researchers detail in the paper how they were able to produce 3.33-6.67 micro newtons per kilowatt of thrust, which is two orders of magnitude lower than the controversial 2006 results obtained by Shawyer.

The paper indicates that NASA’s propeller achieved 270 degrees of rotation under power, over 32 minutes, before the battery ran out and then allowed the turntable to rotate 12 turns over a further 89 minutes.

EmDrive (also RF resonant cavity thruster) uses a magnetron to produce microwaves that are directed to a conical, completely enclosed, metallic vessel capable of isolating the radiation by operating as a resonant cavity. This container would have a truncated cone shape on two sides, a larger face where the thrust would be produced and a smaller face where a dielectric resonator would be found.

However, Such a thruster would be a type of reactionless drive, providing thrust from electricity without consuming a propellant. This would apparently violate Newton’s Third Law and the conservation of momentum, leading most physicists and propulsion experts who look at such devices to dismiss them as impossible.