It is believed that several ancient Sumerian texts describe ‘creator gods’ who came from an unknown planet called Nibiru, a planet which enters and leaves our solar system in cycles of 3,600 years. This planet is believed to be the home of our creators the Ancient Anunnaki. 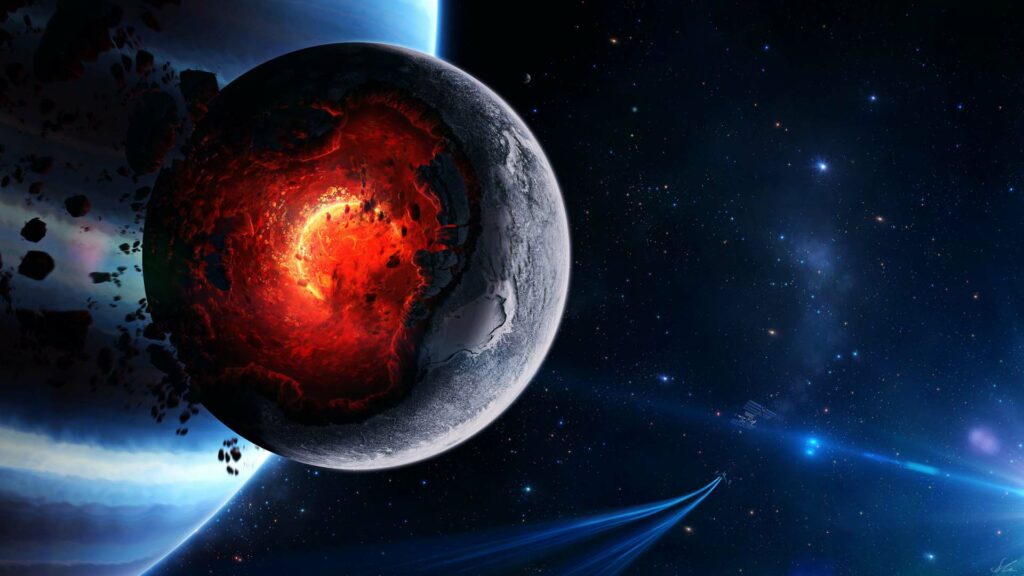 Currently, when you search about Nibiru, you will encounter numerous claims and hoaxes which detail how a massive planet called ‘Nibiru’ will one day collide with Earth.

The truth however, goes far beyond that. According to several authors like Sitchin, Nibiru in Babylonian astronomy is translated to Planet of Crossing to ‘Point o transition.’

While many websites report that Nibiru si nothing more than a hoax, the truth is that a planet called Nibiru is mentioned and described in detail in the fifth tablet of the Enuma Elish as translated by Sitchin. Nibiru as a planet mentioned in the work of controversial author Zecharia Sitchin which has gathered much attention among ufologists, conspiracy theorists, and ancient astronaut theories.

Nibiru as a planet mentioned in the work of controversial author Zecharia Sitchin which has gathered much attention among ufologists, conspiracy theorists, and ancient astronaut theories.

According to his claims, through the interpretation of ancient Sumerian texts, there is conclusive evidence that mankind was created by an advanced alien civilization from a distant planet in our solar systems called Nibiru.

However, Sitchin’s work regarding Nibiru lies mostly in the astronomical interpretation of the Enuma Elish, an ancient creation myth. Sitchin replaced the names of Gods with planets.

So, why are Sitchin’s works bombarded by skeptics? Well, mostly because Sitchin’s evidence lies mostly in his own translations and not on scholarly agreed interpretations. This is why most of his work–therefore even Nibiru— remain as nothing more than pseudoscience.

Zecharia Sitchin described Nibiru according to Sumerian cosmology as the 12th planet. Nibiru is home to an alien race called the Anunnaki an extreme advanced extraterrestrial civilization. Nibiru is also called Marduk, and it arrives at our solar system with an extreme clockwise elliptical orbit.

Curiously, astronomers today are firmly convinced that our solar system has many more planets that remain undiscovered, beyond the orbit of Neptune. One of those planets—referred to as Planet X—is believed to be a massive planet, much larger than Earth.

Getting back to Nibiru… The cuneiform symbol used to describe Nibiru was often a cross or various winged disc. Furthermore, to the ancient Babylonians, Nibiru was a celestial body associated with the God Marduk.

Marduk is an Akkadian word whose translation has still not been defined by academics.

Sitchin concluded that Nibiru is a massive planet with an extremely elliptic orbit around our Sun. Nibiru is said to have an orbital period of around 2,700 years, and Sitchin claims that Nibiru was the home –or still is— of the ancient Anunnaki, who allegedly came to Earth in search of Gold, to repair the damaged atmosphere of Nibiru.

While Sitchin’s work is heavily criticized, evidence of a massive planet in the outermost edges of our solar system has been found by astronomers in 2016.

In fact, based on numerous simulations and perturbances present in the orbits of dwarf planets in our solar system, experts believe a vast alien world –ten times the mass of earth— is located beyond the orbit of Pluto.

On July 13, 1987, an article appeared in Newsweek where NASA is said to have disclosed the possibility that there might be a 10th planet orbiting our Sun.  According to NASA research scientist John Anderson, Planet X might actually be out there, but nowhere near our planets. The article from Newsweek states: “if he is right, two of the most intriguing puzzles of space science might be solved: what caused mysterious irregularities in the orbits of Uranus and Neptune during the 19th Century? And what killed off the dinosaurs 26 million years ago.”

However, ‘evidence’ of such a planet existing can be traced back to a very interesting article in the Astronomical Journal in 1988 by R. Harrington who wrote that a planet three or four times the size of Earth existed, having a position of three or four-time further from the sun than Pluto.  According to mathematical models that were presented, it is believed that Planet X or Nibiru, has an extremely elliptical orbit of 30 degrees.

An article from AP written on October 23, 1996, stated that: A new planet that breaks all the rules about how and where planets form has been identified in orbit of a twin star about 70 light years from Earth in a constellation commonly known as the Northern Cross. The new planet has a roller coaster like orbit that swoops down close to its central star and then swings far out into frigid fringes, following a strange egg-shaped orbit that is unlike that of any other known planet.

Furthermore, according to a team of researchers from California Institute of Technology’s (Caltech), the unusual tilt of the Sun could be attributed to this massive, undiscovered planet that is lurking at the edge of our Solar System.

While the above-quoted articles suggest, it’s possible that there might be a rogue planet ni the outermost edges of our solar system, suggesting that it is Nibiru is far fetched. In fact, if there is any evidence of Nibiru, then that evidence is based on personal interpretations of a heavily criticized author.

Not that I am saying Nibiru does or does not exist. There are some things in history that just don’t add up. If we look back to the creation of man, the appearance of the first civilization, first alphabet and language, we will find huge gaps that mainstream scholars have been unable to fill.

While most articles out there related to Nibiru are descriptions of hoaxes, very few articles offer insight into what Nibiru could or could not be. In the last decades, we have come to accept that Nibiru is ever so present in the alternative literature yet we have failed to understand anything about it.

It could be the result of misinterpretations of an author, but there could also be evidence that such a planet, at least similar in description, may exist somewhere in the outermost edges of the solar system.

Evidence of Nibiru is said to be present in ancient texts.

A quote from Pomponius Mela, a Latin author of the first century states:

“The Egyptians pride themselves on being the most ancient people in the world. In their authentic annals … one may read that since they have been in existence, the course of the stars has changed direction four times and that the sun has set twice in that part of the sky where it rises today.”

“In the second book of his history, Herodotus relates his conversations with Egyptian priests on his visit to Egypt sometime during the second half of the fifth century before the present era. Concluding that history of their people, the priests told him that the period following their first king covered three hundred and forty-one generations, and Herodotus calculated that three generations being equal to a century, the whole period was over eleven thousand years. The priests asserted that within historical ages and since Egypt became a kingdom, ’four times in this period (so they told me) the sun rose contrary to his won’t; twice he rose where he now sets, and twice he set where he now rises.”.

Furthermore, in the Bible we find:

“From a far away land they came, from the end-point of Heaven do the Lord and his weapons of wrath come to destroy the whole Earth. Therefore will I agitate the Heaven and Earth shall be shaken out of its place. When the Lord of Hosts shall be crossing, the day of his burning wrath.” Isaiah 13:1.

“That Mankind’s progression from Palaeolithic (Old Stone Age) to Mesolithic (Middle Stone Age) to Neolithic (New Stone Age) and then the great Sumerian civilization, had occurred in intervals of about 3,600 years, is a fact.

That Anu visited Earth, approved the grant of civilization (knowledge, science, technology) to Mankind, marked by the start of the calendar in Nippur in 3760 BC (which is still the Hebrew/Jewish calendar), is certain (as far as I am concerned).

But as I have tried to explain in my recent Seminars (though not yet in a full-length book), the visits to Earth and the nearing (at what is called perihelion) of Nibiru do NOT coincide. This is a point of immense significance, which those who have only read my first book somehow ignore.”

It is said that Nibiru will appear from the North Pole of the Sun and Earth, which will make the alien world widely seen in the northern hemisphere.

My conclusion? It’s hard to understand much about Nibiru. There’s simply not enough evidence to support that an alien world like it exists in the outermost reaches of our solar system. While it is likely that a planet of similar proportions lays hidden somewhere out there as scientists have stated until we actually manage to see the world with our telescopes all theories are possible, I guess.

I do believe that we aren’t the only intelligent civilization in the cosmos and I do believe that its likely that mankind has been visited by beings not from Earth since time immemorial. Whether or not these beings ar ethe A from Nibiru, is an entirely different thing.

What do you think about Nibiru, Sitchin’s work and the possibility of a planet of said proportions existing in the outermost edges of our solar system?