Meet Solar Express: The Spacecraft that could take man to...

It’s a revolutionary concept that could change everything we think we know about space travel. Many are calling it the Space Train.It is a spacecraft that could take mankind and equipment to Mars in just 37 hours! 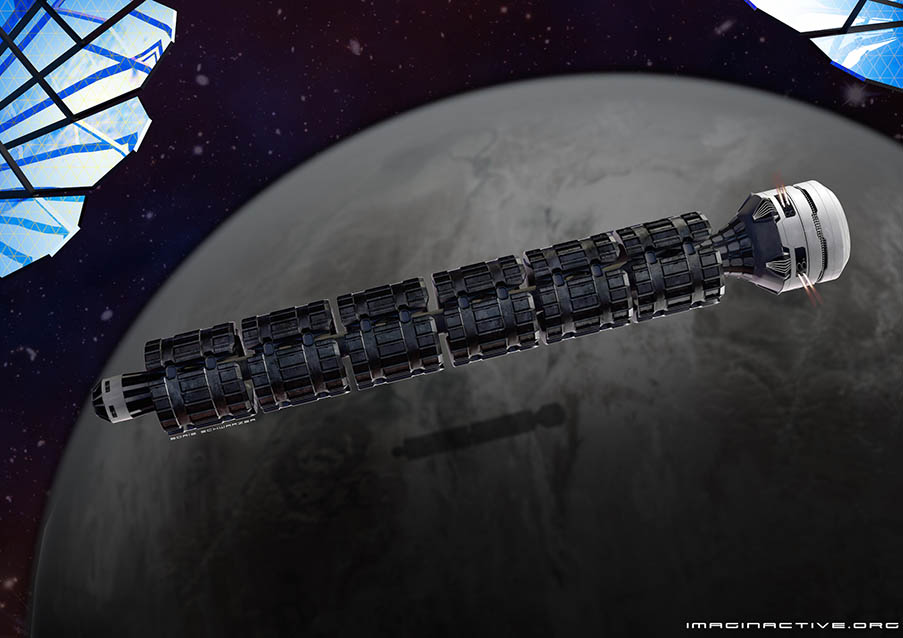 The fascinating spaceship called Solar Express is literally a space train that could travel on a never-ending high-speed route –in other words, it never slows.

According to its creators, “It would run non-stop so smaller vessels would need to catch the train when it passed by.”

‘In space the most expensive portions of travel are the acceleration and deceleration phases,’ said Charles Bombardier of Imaginative,  a nonprofit organization whose mission is to “inspire future generations to create the future of mobility.”

Bombardier worked together with engineer Oliver Peraldi in order to offer a glimpse at future space travel.

“The energy required for those portions is tremendous, especially for something as heavy as a space train. In addition, if you were to start hauling cargo, it would become very expensive. However, once the train reached its cruising speed, its energy consumption would be minimal. That’s the idea behind the Solar Express concept.”

According to its creators, Solar Express could be used to transport equipment, minerals, other vessels and even people living in sections under gravity.

It is a design straight out of a science fiction movie

A massive ‘space city’ would orbit around the longitudinal axis and offer gravity within it, so humans could be able to walk and live there during prolonged periods of space travel.

Its creators say that the faster Solar Express travels, the more expensive it will be to catch.

He explains: “As you can imagine, the cost per ton is important, much like parcel shipping services. Some Solar Express trains could be used to make large loops (between distant planets), while others would be assigned shorter routes and their speed will vary.”

Speaking to Forbes, Bombardier said that the first spaceship would be able to shuttle cargo and transport people between our planet and our moon in just seven hours completing a speed of 15km/s.

Bombardier further explains: “The Moon will serve as a launching pad for other projects because it is easier to assemble and build this kind of train in the absence of gravity,” he says. “And Mars seems to be a good candidate for the next phase, especially if we can terraform it.” 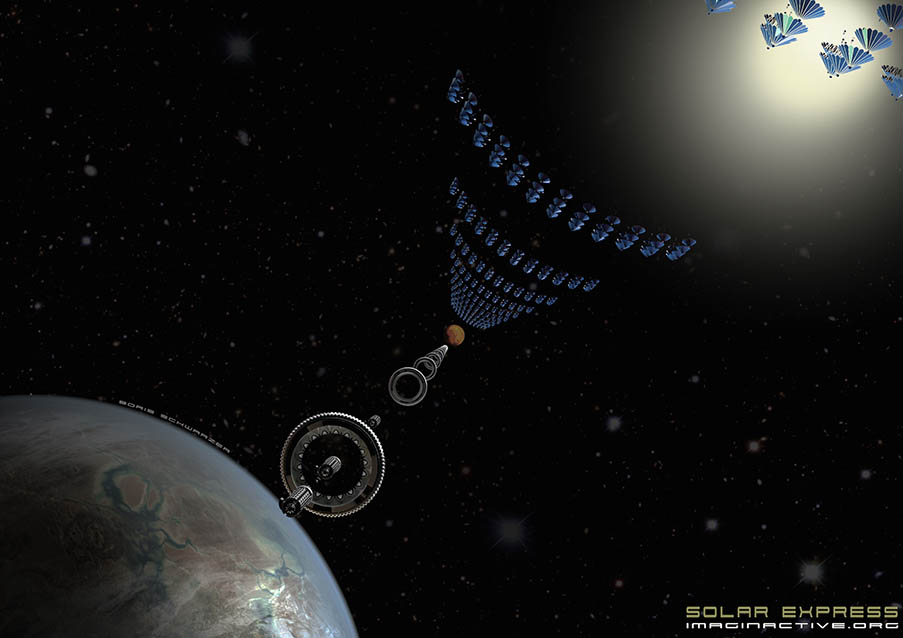 Solar Express is something you’d probably see in a  star trek movie.

The spaceship is in fact a series of aligned cylinders.

Each of the cylinders would need to have a length of at least 50 meters. Each space train would be made of six vehicles places in line.

The cylinders making up the train would be divided into four cargo bays and could interchange while in flight with the aid of smart maintenance robots.

Before obtaining its maximum speed, Solar Express would use the help of boosters to accelerate.

Any leftover fuel could later be used to make course adjustments if needed.

To find out more about Solar Express, please visit: