Russian archaeologists have managed to recreate a computer model of the enigmatic elongated skull that was discovered in Russia’s Stonehenge: Arkaim. This proves that elongated skulls are a global phenomenon present all around the world. The question that remains is: Why were elongated skulls so important in the distant past?

In 2015, Russian archaeologists excavating Russia’s Stonehenge known as Arkaim discovered a mysterious skeleton with an unusually anomalous elongated skull. After numerous studies and analysis, they have managed to recreate how the ‘Arkaim elongated skull’ really looked like in the distant past.

Arkaim is one of the most mysterious ancient archaeological sites in Russia. This 20.000 square meter compound was protected by circular walls just before it was burned down and abandoned mysteriously. Archaeologists believe that, just like Stonehenge in the UK, Arkaim was an ancient site dedicated to the observation of stars and constellations.

Arkaim was a very sophisticated settlement, and in some cases, it displayed unique technologies that went far beyond the capabilities of other similar settlements since Arkaim had a very complex water drainage system and sedimentation pits.

Researchers speculate that ancient tribes in the vicinity of Arkaim practiced head binding just as many other ancient cultures around the globe.

Researcher Maria Makurova has confirmed to the Russian news agency TASS: ‘We have found a well-preserved skeleton. ‘Her skull was elongated because the tribe did so by tying up the heads of their children with rope. It was clearly a tradition in the tribe.’

Now, scientists have managed to recreate the image of a woman in a very precise model in three dimensions which even reproduces the color of the skin and eyes and its most interesting feature: the elongated skull. Precisely because of the odd shape of the head researchers have nicknamed her as ‘the Sarmatian alien.’

According to Yuri Makurov, the elongated shape of the skull is not unusual among the Sarmatians: in fact, in 80% of cases, during the excavation of Sarmatian graves in the area of the Ural Mountains researchers have discovered evidence of similar bone structure. Scientists explain that this is was achieved through head binding, a deformation that is created during early childhood by pressing the skull between two boards tied with ropes. 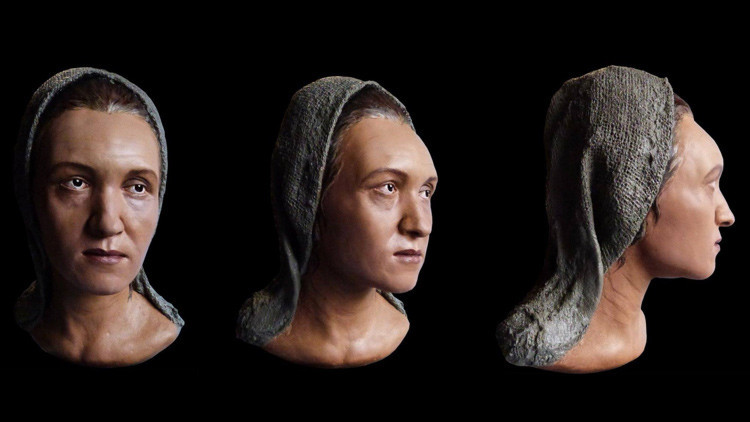 This practice could be due to the beauty standards of the Sarmatians or the desire to create a distinctive sign in order to distinguish individuals from their group of foreigners. Artificial head deformation practices have also been discovered in numerous other ancient cultures around the globe, among the most noteworthy are Peru, Egypt and parts of Asia.

This proves that elongated skulls are in fact a global phenomenon and not an isolated event as was previously believed.

Why did ancient cultures around the globe practice a procedure by which they artificially created elongated human skulls? Did they come up with this idea on their own? Or was an external influence present, thousands of years ago which led people from Asia, the Americas and other parts of the world to practice such a bizarre procedure?

These are just some of the questions that have created an ongoing debate in the archaeological community.