Mysterious ‘secret chambers’ have been found inside Great Pyramid of... 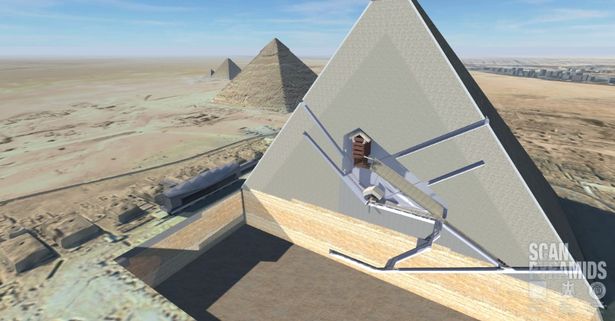 Scientists have reported they’ve ‘found’ what appear to be two previously unknown, secret chambers located inside the Great Pyramid of Giza. This discovery proves just how mysterious this enigmatic structure really is.

Experts came across the mystery cavities after performing never-before-seen scanning of the ancient structure using a revolutionary new technology.

The Great Pyramid of Giza was believed to have been built by Pharaoh Khufu some 4,500 years ago. Throughout history, this ancient monument has been shrouded in mystery.

“…We are now able to confirm the existence of a ‘void’ hidden behind the north face, that could have the form of at least one corridor going inside the Great Pyramid…” (ScanPyramids)

The pyramid is estimated to have around 2,300,000 stone blocks that weigh from 2 to 30 tons each and there are even some blocks that weigh over 50 tons. It is believed that the outer mantle was composed of 144,000 casing stones, all of them highly polished and flat to an accuracy of 1/100th of an inch, about 100 inches thick and weighing approx. 15 tons each.

It was originally covered with casing stones (made of highly polished limestone). These casing stones reflected the sun’s light and made the pyramid shine like a jewel.

They are no longer present being used by Arabs to build mosques after an earthquake in the 14th century loosened many of them.

It has been calculated that the original pyramid with its casing stones would act like gigantic mirrors and reflect light so powerful that it would be visible from the moon as a shining star on earth. Appropriately, the ancient Egyptians called the Great Pyramid “Ikhet,” meaning the “Glorious Light.”

How these blocks were transported and assembled into the pyramid is still a mystery.

ScanPyramids coordinator, Hani Helal, said that “more studies and research will be conducted to establish the nature of these anomalies and their functions and size, which have not yet been identified.”

Researchers have used, for the first time ever, three complementary techniques: Muography, thermography, and 3D-simulation to ‘scan’ the Great Pyramid of Giza “.

According to experts, muography can detect voids or empty spaces inside thick layers of Earth or Stone. Muons are cosmic particles that crash into our planet and an average rate of 10,000 per m² per minute. Muons can be absorbed or deflected by a dense material.

For now, researchers say that these anomalies are just that and that further testing will need to be performed in order to conclude what exactly is inside the pyramid.