NASA has recently announced it is set to ‘probe’ the universe and search the cosmos for the existence of water and organic molecules.

The American Space Agency’s mission will hunt down post-Big-Bang clues and will try and find the presence of water within the Milky Way Galaxy.

To probe the cosmos, NASA is set to build an unmanned spacecraft known as the Spectro-Photometer for the History of the Universe, Epoch of Reionization and Ices Explorer, or, if you prefer: SPHEREx.

The new mission is set to launch by 2023 and is planned to last for at least two years.

According to NASA, the mission is expected to cost around $242 million (excluding launch costs).

The mission itself will have three main goals:

1) constrain the physics of inflation by measuring its imprints on the three-dimensional large-scale distribution of matter, 2) trace the history of galactic light production through a deep multi-band measurement of large-scale clustering, and 3) investigate the abundance and composition of water and biogenic ices in the early phases of star and planetary disk formation. 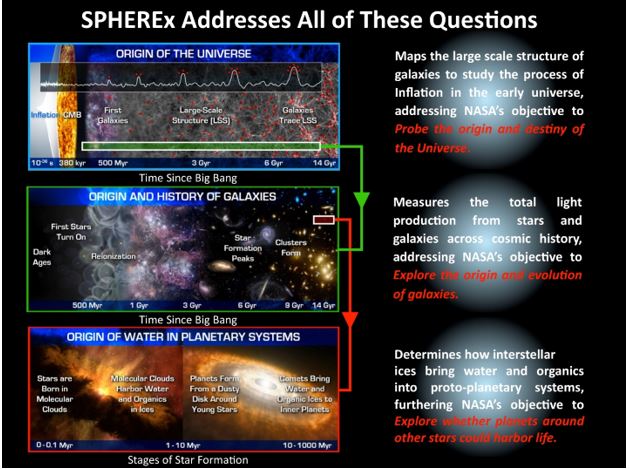 Once in space, SPHEREx is expected to observe an estimate 300 million galaxy both by optical and near-infrared light.

Scientists are expected to observe galaxies located so far away, that light from their stars has taken billions of years to reach our planet.

And observing extremely distant star clusters is one of the key goals of the mission.

Speaking about SPHEREx, Thomas Zurbuchen of NASA’s Science Mission Directorate explained in a statement: “This amazing mission will be a treasure trove of unique data for astronomers. It will deliver an unprecedented galactic map containing ‘fingerprints’ from the first moments in the universe’s history. And we’ll have new clues to one of the greatest mysteries in science: What made the universe expand so quickly less than a nanosecond after the Big Bang?”

By 2025, the mission is expected to complete as many as four surveys of the entire sky and will aim to create cosmic maps using 96 different color bands.

As explained by the mission’s website, “SPHEREx’s overlapping scan strategy will obtain a minimum of four 0.75– 5.0-micron spectra at every point along the ecliptic, with much greater redundancy in the deep survey fields at the North and South ecliptic poles.”

To find out more about the mission, please visit this link.