The Nebra Sky Disk And The Pleiades

The ‘Nebra Sky Disk‘ was an ancient star map constructed in Germany at around 1600 BCE. It depicts several key features of the sky (the sun, the moon, and the stars). One of its most interesting functions centers around the two golden arcs which run along the sides of Disk. Each arc spans an angle of 82°, correctly marking the angles between the summer and winter solstice. This makes the sky disc the first portable artifact in Europe to depict the solar cycles.

a more interesting feature, perhaps, is a cluster of seven dots found near the top of the disk (between the sun and the moon symbol) believed to be the Pleiades constellation. The star mass is often found on Scandinavian petroglyphs, suggesting it was an important symbol to the Germanic people.

None of the other star alignments of the disk match up with any constellations in the night sky. This suggests the artifact wasn’t used as a star map, but rather a symbolic depiction of the cosmos. Is it possible, then, that the disk illustrated some kind of celestial narrative?

In Babylon, the Pleiades was known as the “star of stars”, considered to be a regent part of the night sky. The ancient Egyptians believed it was an embodiment of the goddess Neith, the ‘divine lady of heaven’. In Greek mythology, the Pleiades represented the seven daughters of the Titans (Atlas and Pleione). Their names meant `the sailing ones,’ due to the way the stars sailed across the sky. 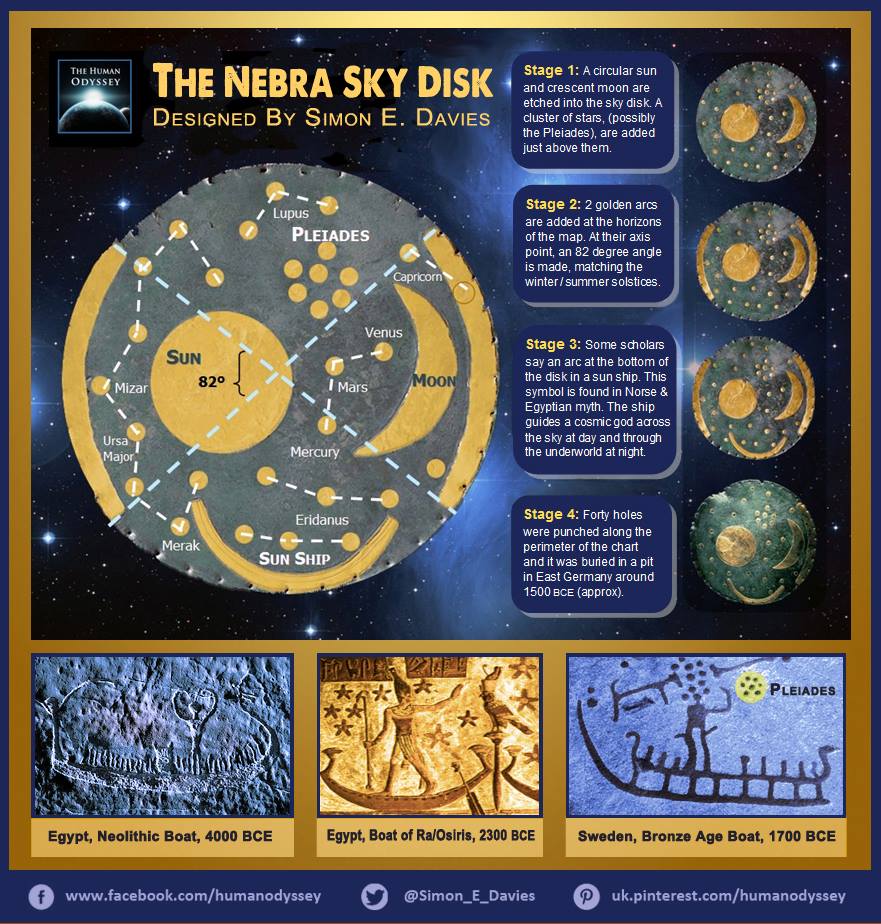 Following on from this sailing motif, there is another symbol on the chart with has nautical features. A third curve, found at the bottom of the disk, is believed by some scholars to represent the sun boat, a mythical symbol found in Egyptian and Norse mythology.

In Ancient Egypt, Ra was a Sun God of who was believed to traverse the sky in a solar boat. During the day his vessel glided across the heavens, bringing light to the earth. In the evening it passed below the horizon bringing darkness, only to return the following day. This event symbolized the death & rebirth of the sun god.

In some Scandinavian rock art (carved around 1700 BCE), a celestial figure can be seen with a starry crown, standing on a boat. Unlike the Sun God who rises and sets daily, this Scandinavian entity was linked to the Pleiades (the constellation can be seen to the left of the graphic), meaning it would rise in the Spring (a time of renewal) and set again in the Autumn (a time for harvest).

In both mythical depictions, the solar/cosmic deity blazes with life in the sky, eventually falling behind the horizon, signifying a kind of celestial death.

The sun symbol to the left of the star map may represent the rising and setting of the sun, signifying the cycle of night and day respectively.

The moon symbol also rises and sets across the sky, albeit over a much longer duration. It is likely the moon is used to illustrate the cycle of the month.

The Pleiades also rises and sets across the horizon. The Greeks used it to mark the spring as it ascended, and the Autumn as it descended (seasonal cycles).

The golden arcs on the side of the disk cover an 82-degree angle, matching the summer & winter solstices of Germany’s horizon (seasonal cycles).

Finally, we have the cosmic boat, a symbol of a sky deity who presides over the cosmic cycles inherent to the map. When looking at the symbols in this way, the star disk seems to be telling the story of death and resurrection, a tale that can be found in many world mythologies.

To think of the disk as a portable star map is probably wide of the mark. It is more likely a proto-calender, designed by priests to determine where they were in a lunar year. By plotting the Pleiades against the golden arcs of the disk (which represents the horizon), they could predict how much of spring was left, when to celebrate the solstices, and when to get the farmers to harvest their crops.

If this is the case, the Nebra Sky Disk would probably have been owned by someone with considerable prestige and would likely have been an object of considerable power, helping out ancients to understand and navigate themselves around the secrets of the cosmos.