New Research Suggests The Bible is Much Older than Previously...

An algorithm is helping decipher the origins of the Bible. New research suggests the Bible was composed much earlier than mainstream scholars believe, pushing back the origin of the ancient text by centuries. 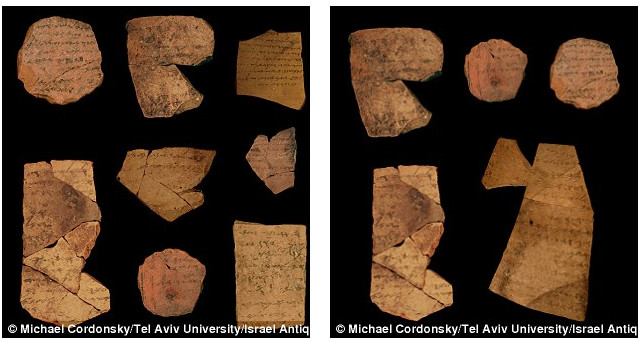 Cutting edge technology applied to the analysis of inscriptions of fragments excavated in a desert fortress of Judea are shedding light on the high level of literacy six centuries before our era and the possibility that some texts of the Bible were written even before the fall of Jerusalem in 586 BC.

“It is well known that the Bible was not made in real time, but is collections of ancient texts that were edited later,” said Arie Shaus, a mathematician at the University of Tel Aviv. “The question is when exactly.”

Shaus is part of a group of scholars trying to solve the issue radically: using tools such as intelligent text recognition to determine how many people could write in ancient times. The first analysis, which was published in the Proceedings of the National Academies of Sciences, suggests that the level of literacy was well spread in the kingdom of Judah, creating a consistent atmosphere for the compilation of sacred texts.

Most scholars agree that some of the biblical compositions that formed the cornerstone of the theology of the Israelite kingdom including the Book of Joshua, Judges, and the two books of Kings, and even parts of Genesis and Deuteronomy took shape during what is known as the late First Temple period before Jerusalem fell into the hands of Babylonian king Nebuchadnezzar II. But the circumstances surrounding when these texts were written or how many authors, remain a mystery.

Now, interestingly, texts that have nothing sacred could clarify the matter.

Using sophisticated image processing techniques and a handwriting recognition tool, researchers investigated 16 inscriptions discovered in the desert fortress of Arad, west od the Dead Sea. The inscriptions were written on ceramic pottery chards called ostraca and are believed to date back to around 600 BCE detailing mundane military commands and supply orders.

“The commander down to the lowest water master could all communicate in writing, this was an extremely surprising result,” said Arie Shaus in an interview.

Speaking to gizmodo.com, Christopher Rollston, an expert on archaeology and Bible studies at George Washington University said “This is a highly innovative and important study, I think that literacy was confined to elites, basically scribes, high military officials, and priests,”, suggesting that by the late First Temple Period, it’s very likely that both reading and writing were widespread to more of the upper class.

The discoveries support the idea that the Bible could have been a massive composition of ancient texts, created by many authors which were then gathered together and not a single literary work as many scholars believed previously.

‘Biblical texts carry ideological and theological messages and as such were probably meant to be known to the population.

‘Hence, there has been an ongoing discussion on literacy in ancient Israel/Judah.

‘Our work shows that late-monarchic Judah (around 600 BC) had an educational infrastructure which was suitable for compilation of texts and use of the written word medium to convey ideological messages.’