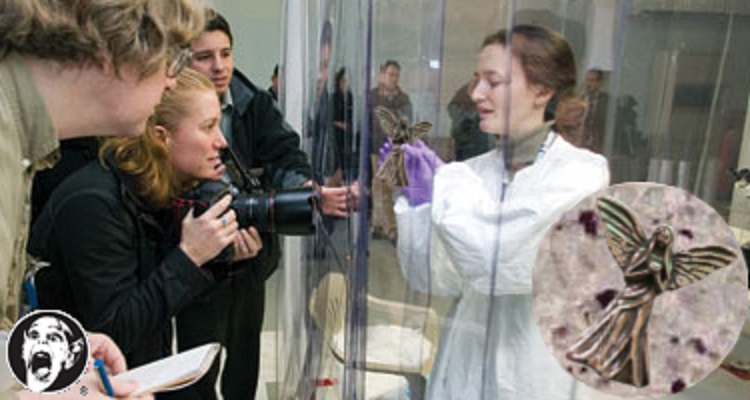 A new SENSATIONAL article has started (again) circulating the internet. Titled, 200,000-YEAR-OLD STATUE FOUND ON THE MOON SAYS DR. CHARLES MORRIS, the article claims that a geologist by the name Dr. Morris Charles revealed that NASA lab workers chipped the statue of an angel-like figure from one of the rocks brought to Earth by Apollo 11 astronauts in 1969.

The only thing is, this never happened.

What’s the deal with the article? Well, the article makes some sensational claims, which have ‘surprisingly’ been treated as a fact by many.

Here’s the article (great imagination, I must admit):

A noted scientist has just produced proof that the lunar surface was inhabited by intelligent life: a 10-inch angel sculpture embedded in a moon rock.

Geologist Dr. Morris Charles revealed last week that NASA lab workers chipped the angel from one of the rocks brought to Earth by Apollo 11 astronauts 40 years ago, in 1969. Dr. Charles was a NASA scientist himself for 23 years but left the agency in 1987. He still maintains close ties to many of his former colleagues.

“The implications of this figurine are absolutely mind-boggling,” Dr. Charles told reporters. “It means that at one time the moon had an atmosphere conducive to life. And what’s more, it was once home to a sophisticated race of people with a highly refined sense of beauty.”

The angel – a humanoid female with wing-like appendages on her back and long flowing hair – is made of an iron compound found exclusively in the highlands of the moon.

This rules out the possibility that it was dropped by a race of aliens from another planet. It’s been hand polished to a silvery metallic sheen. Based on chemical analysis of the metal, geologists estimate the sculpture to be 200,000 years old which means it was made 170,000 years before the human species appeared on Earth.

It’s been examined by art experts who concur with Dr. Charles’ appraisal of the culture that produced it. “Clearly these beings had a sense of religion that parallels our Christianity. Perhaps they had a Jesus of their own, proving that the important spiritual principles are, in a very literal sense, universal,” said a Washington anthropologist.

Others are not so sure of its religious significance. Dr. Miles Fredericks of New York University countered, “This is just more Christian propaganda. The Sumerians told stories of the Annunaki, winged deities, as far back as 18th century BC. Maybe the Sumerians were visited by these moon beings, who merely modeled the statue after their own image.”

While many ponder the significance of the figure, others are curious about why it has remained a secret for so long. “The artifact has been common knowledge among NASA insiders for years,” said Dr. Charles. “But space agency higher-ups have kept the information highly classified, fearing world-wide panic. It was smuggled out to me by persons who must, for obvious reasons, remain anonymous.”

NASA officially denies Dr. Charles’ allegations. The statue was displayed to photographers and newsmen but is now being held for further study at an undisclosed location.

After doing some research, I discovered that it started circulating online in 2009 when several popular websites reprinted the article.

After further digging and researching, I came across its original source: The Weekly World News, a largely fictional news tabloid published in the United States.

As you can see, we did not find any sort of statue on the moon, the story leads nowhere.

While there are some things out there that are really unexplainable, this simply put is not one of them.