Origins Of The Flood Myth I: The Black Sea Deluge 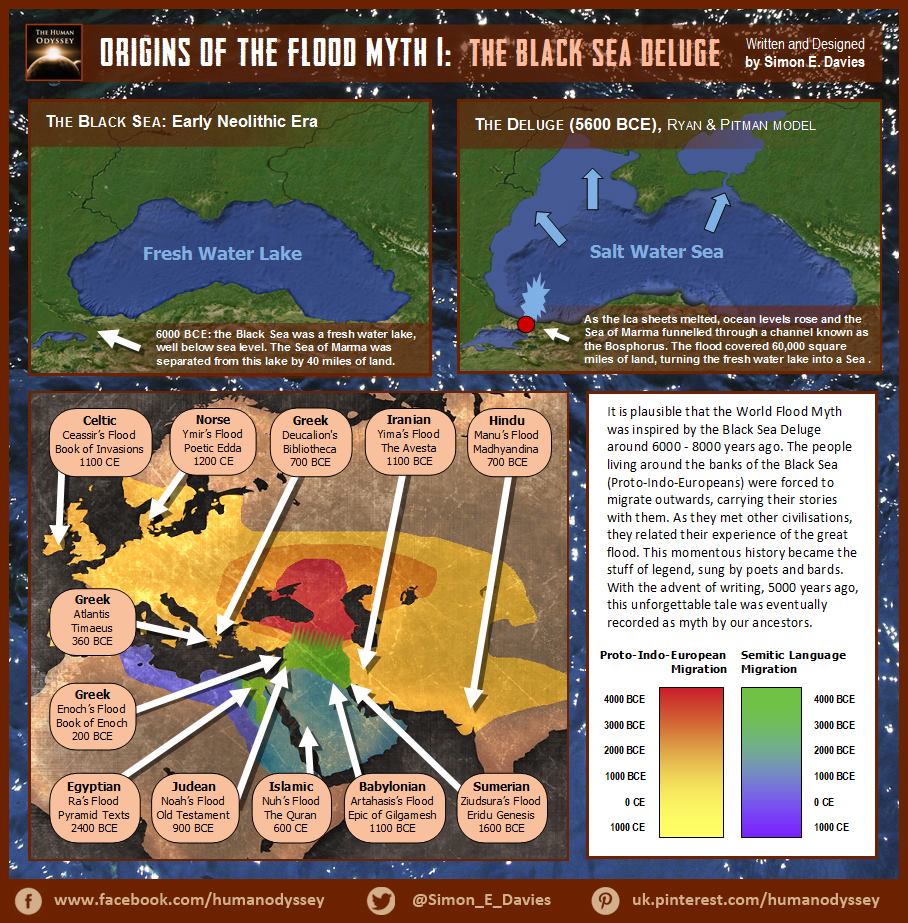 There is an enduring myth that pervades the majority of world culture known as the great flood deluge. Although this story takes on many different guises from one civilisation to the next, it typically involves the following details:

A deity / deities are displeased with their human creations and send a great flood to destroy them. A hero is given divine instruction to build a vessel (or given one). They either travel with a partner, their family, their tribe, or even with an assortment of animals. The vessel protects its inhabitants while the world outside is consumed by a profound rainstorm, flooding the lands. Eventually the vessel lands on a mountain and the occupants disembark, starting a new life.

The question is, why does this same story resonate in so many cultures around the world? What common event connects all these tales from the Middle East to South America?

William Ryan & Walter Pitman published evidence of a massive flooding of the Black Sea during the Neolithic, 7600 years ago. Prior to this, the Black sea was a smaller, fresh water lake, filled by glacial waters in the last ice age. As the world began to warm in the Holocene era (10,000 years ago), the ice sheets began to melt. Sea levels rose and eventually the Mediterranean waters overflowed into the fresh-water lake forming the Black Sea.

But just how profound was this deluge of sea water that spilled into the freshwater lake? Scientists have collated evidence and come up with two opposing hypothesis:

A: The Catastrophic Flood: Ryan and Pitman, 1997

5600 BCE; the fresh water lake,100 m lower than today, experienced a profound flood. 10 cubic miles of sea water poured through the Bosphorus each day – two hundred times the flow of the Niagara Falls. The Bosphorus flume roared and surged for at nearly a year, raising water levels between 60 to 80 metres and flooding 60,000 square miles of land. Ryan and Pitman collated the following evidence:

• An underwater canyon carved out by a flood from the Bosphorus
• An ancient shoreline of freshwater molluscs (dating to 5600 BCE)
• Man made structures made of wood &brick beneath the Black Sea.

People living along the shores of this lake (Proto-Indo-Europeans, aka P.I.E.) would have been caught up in a sudden swell of water, rising several feet per hour. They escaped by either floating on the flood-water or attempting to outrun it. The deluge resulted in the dispersion of the P.I.E people across Europe, the Middle East and Asia. This could have been the basis of the world flood myth, as migrants travelled across the continent, taking their account of the flood story with them.

B: The Gradual Flood: Valentina Yanko-Hombach, 2009

7400 BCE: Glacial melt water filled the fresh water lake for thousands of years, slowly dispersing tribes along the shoreline. Eventually it swelled over into the Bosphorus. Fresh water mixed with salt water, and the lake turned into the Black Sea. If the Sea of Marma had breached into the fresh water lake first, it would have only been 30 m lower than today. Flooding would have been quite mild, covering only 2,000 sq miles of land, rather than 60,000 sq m proposed by Ryan & Pitman.

A. An underwater canyon suggests a powerful flood churned up the lake-bed, remolding the land.
B. Similar underwater canyons in the area suggest it was a natural formation,l unaffected by the flood.

A. Man made structures (beams & bricks), reveal a settlement existed before the flood, only to be submerged by the Deluge.
B. Carbon dating revealed the wood is only 200 years. The bricks are yet to be dated, yielding the possibility of a lost civilisation.

A. Samples from the sea bed show a rapid shift from fresh water soil to a mud rich in iron-sulphide, demonstrating a sudden change.
B. Soil samples in tributary rivers suggest the fresh water lake was not low enough to be dramatically flooded by the sea of Marma.

From the standpoint of mythology, the events of the Black Sea Deluge don’t match up to the description of the world flood. The Old Testament, Bibliotheca and Epic of Gilgamesh (among most other old world texts) speak of a profound storm with powerful winds and unrelenting rain which fell for a prolonged time.

In order to find an event that fits the characteristics of the world flood, we need to turn to a more catastrophic impact. In The Origins of the flood Myth 2, I’ll introduce you to another compelling theory which seems to approximate the great flood deluge far more accurately and also fits with historical accounts.