Reaching the Inner Earth: A Team of scientists wants to...

Is there hidden life underneath the Earth’s mantle? An expedition set to drill the seabed will soon find out

A mission designed 60 years ago to drill into the seabed through the Earth’s crust and penetrate the underlying layer is becoming a reality in the Indian Ocean. Scientists hope to sample the mantle rock in order to answer important questions about the interior of our planet and how deep life can exist. Starting next week, the drill ship JOIDES Resolution will depart from Colombo, Sri Lanka, to a point in the southwest Indian Ocean known as the Atlantis Bank. There, the crew will drop a drill and, as planned, drill  through 3 kilometers of rock, collecting  core samples as they make their way through the Earth’s crust. If all goes well, future expeditions will complete the project working their way up to the mantle.

It is considered that the boundary between the crust and mantle is a feature marked by the discontinuity known as Mohorovicic, or simply ‘Moho’, which changes the speed of seismic waves. But at the Atlantis Bank, because of the unique geology, the ocean is relatively shallow in the area and the mantle rises close to the surface which will allow scientists to access it with incredible ease. 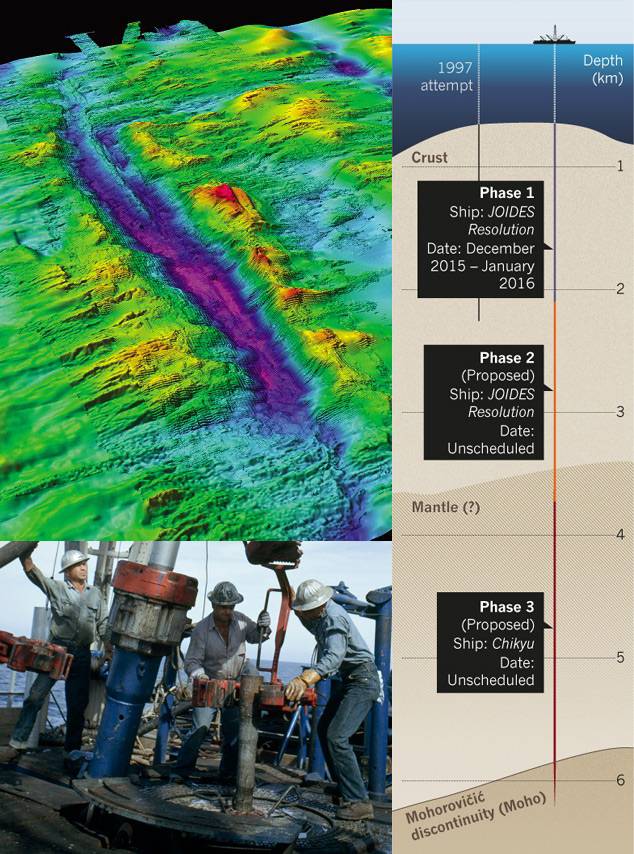 The Mohorovičić discontinuity was first identified in 1909 by Croatian scientist Andrija Mohorovičić when an earthquake struck the country near the modern-day capital of Croatia, Zagreb. It is a boundary layer that basically separates the oceanic and continental crust from the underlying mantle.

In the distant past, specifically in 1960, an expedition attempted a similar project off the coast of Mexico but stopped shortly after reaching a depth of 183 meters. Now, nearly 60 years after, a next expedition wants to do what no one has ever done.

Crossing these unexplored borders which may hide countless treasures “is one of the great scientific endeavors of the century”, said Henry Dick, a Woods Hole geophysicist and co-leader of the 2015 expedition.

Not only are researchers interested in studying the geology as they make their way through never before explored areas of the planet, they are also extremely interested I studying the biological diversity of the area.

According to writing in Digital Trends, recent studies suggest the Atlantis Bank may be a source of serpentinite rock, which forms when seawater reacts with peridotite in the mantle rock, especially those that have been moved upwards by plate tectonics.

Scientists also hope to identify microbial species that could live off methane, a gas produced when the serpentinite rock is formed.

According to statements the first phase of the project will begin this month lasting until the end of January in 2016. The second and third phases will go on at an undetermined date using the Japanese drill ship the Chikyu which has the technology to allow researchers to reach the ‘Moho’ layer.