Researchers discover we are part of a ‘Galactic Highway’

Astronomers have figured out that our Milky Way Galaxy is part of a MASSIVE intergalactic highway that is part of a humongous SUPERSTRUCTURE interconnected by over 800 galaxies.

Astronomers maintain that there are somewhere around 100 and 200 BILLION galaxies in the known universe. That is of course if there is only ONE universe.

In recent years more astronomers are leaning towards the possibility that there are in fact other ‘Universes’ out there, and we are part of a complex system within a ‘Multiverse.’

Researchers have just recently discovered that the Milky Way Galaxy –our very ‘little’ place in the universe— is part of a massive superstructure interconnected by over 800 galaxies located at 1000 million light years away.

Astronomers have determined that the Milky Way is, in fact, part of a supermassive INTERGALACTIC highway –500 million light years across— which contains around 100,000,000,000,000,000 Suns extended through its 100,000 galaxies.

Baptized as Laniakea, this massive supercluster of galaxies is interconnected by a supermassive gravitational flat basin that extends its domain of attraction throughout the supercluster. Think of it as a highway that connects some 100,000 galaxies. All of them move throughout the universe.

This will help researchers translate the speed assigned to the three-dimensional space to get a better understanding of how the cosmos works on a large scale and how superclusters influence our place within the universe.

Interestingly, within Laniakea, galaxies flow inwards towards an ‘unknown region’ called the Great Attractor. This means that the supermassive galactic highway moves together towards this mysterious point in the universe.

The Great Attractor is a mass concentration ten’s of thousands of times that of the Milky Way that has a great influence on the internal movement of clusters contained within Laniakea.

Astronomers have discovered that galaxies in our universe tend to congregate in groups and in supermassive scales, these galaxies are strung out like pearls, forming glowing ‘filaments.’ 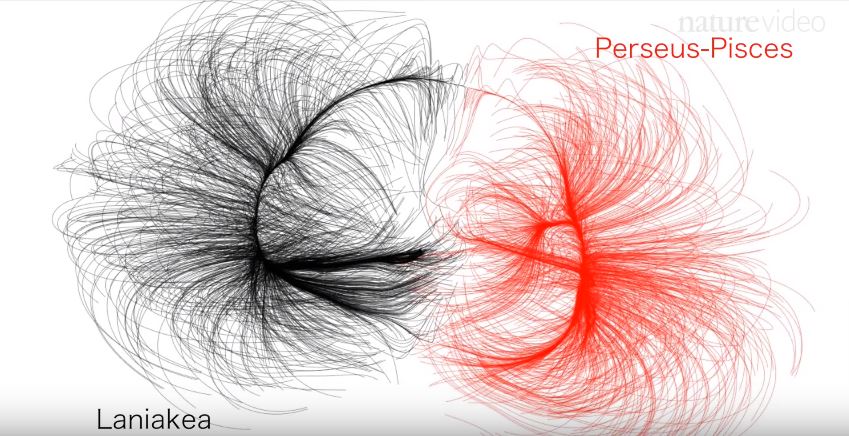 Astronomers have found that around the supercluster known as Laniakea, there are four neighbouring superclusters respectively called Shapley, Hercules, Coma, and Perseus-Pisces.

Writing in the Journal Nature, researchers who helped map our supercluster said: ‘We define a supercluster to be the volume within such a surface, and so we are defining the extent of our home supercluster, which we call Laniakea.’