Sacred Allignment: The Constellation of Orion and ancient Egypt

For thousands of years, the constellation of Orion has been tracked across the sky by numerous ancient cultures who studied the heavens since time immemorial. 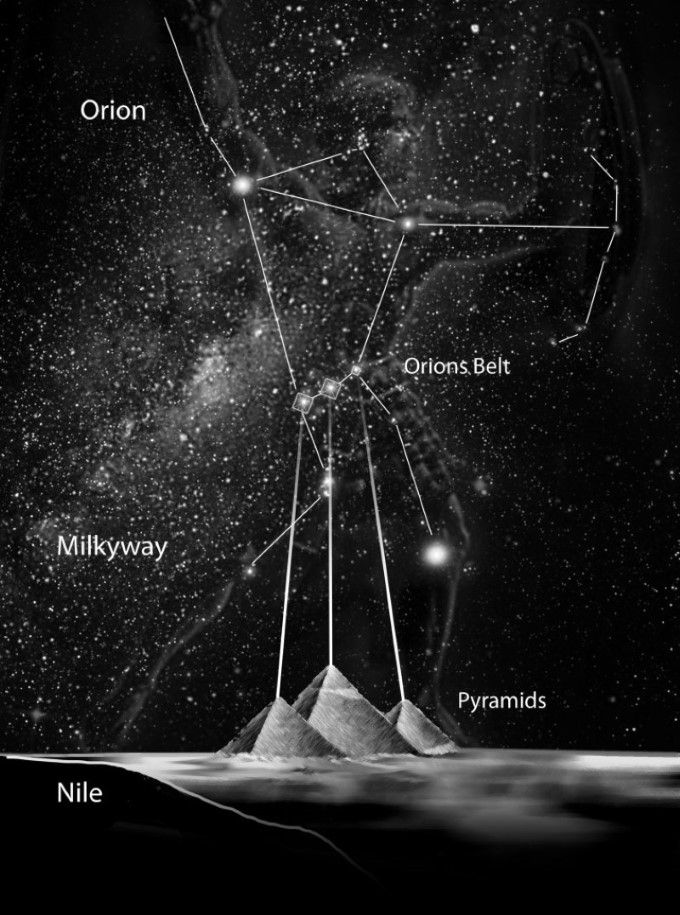 But not only did the ancients follow celestial bodies thousands of years ago, ancient cultures around the globe firmly believed we came from the stars, just as deities and ‘gods’ came down to Earth from the heavens.

One of the most studied constellations by ancient cultures thousands of years ago is the constellation of Orion.

Throughout the ancient world, from Egypt to Mexico this constellation has been the center of the skies for our ancestors.

Why are monuments, such as the Pyramids of Egypt mapped in such a way that these constructions mimic the skies?

Why was Orion so important? And why is it that so many monuments and structures on earth correlate with the position or movements of stars and constellations like Orion?

Orion is without a doubt one of the most prominent constellations in the sky. It is best seen between latitudes 85 and -75 degrees.

Its right ascension is 5 hours, and its declination is 5 degrees. Alnilam, Mintaka, and Alnitak, which form Orion’s belt, are the most prominent stars in the Orion constellation.

Betelgeuse, the second brightest star in Orion, establishes the right shoulder of the hunter. Bellatrix serves as Orion’s left shoulder.

The Orion Nebula—a formation of dust, hydrogen, helium and other ionized gasses rather than a star—is the middle “star” in Orion’s sword, which hangs off of Orion’s Belt. The Horsehead Nebula is also nearby.

While numerous other stars and constellations were crucial for ancient cultures around the globe, Orion was among the most important.

As above so below, the Pyramids of Giza mimic with a fascinating precision the three most important stars of the constellation of Orion. Were the ancient builders of the Pyramids trying to tell us something?

If we look back at ancient Egypt, we will find that this ancient culture believed their gods literally came down from the heavens –from Orion and sirius— in the form of humans. Orion was associated with the God Osiris, while Sirius was connected with the goddess Isis. Together, Osiris and Isis created the human civilization.

Without a doubt, one of the most intriguing ancient civilizations on Earth is the Egyptian, and one of the most fascinating structures ever built by man –the Pyramids— are located in Egypt. Orion was worshiped by the ancient Egyptians.

As it turns out, there is a mysterious correlation between the three main stars of the Constellation of Orion and the three main pyramids of the Giza plateau.

The pyramids at Giza are considered by many as the most mysterious structures ever built on Earth. They are both perplexing and mysterious and are a perfect example of sacred alignment since they form a what many believe is a three-dimensional map of the three main stars of Orion on the ground.

As it turns out, the builders of the Pyramids made sure to mimic the constellation as best as they could which is why when the Pyramids were built, the brightness and location of the three main stars of Orion was something that the builders took into account: The two leger Pyramids of the Giza plateau line up ‘perfectly’ with two of Orion’s stars, while the smaller pyramid of Menakure clearly follows the third star of Orion with a slight offset.