Scientists say pterodactyls could fly from birth, unlike all other...

New extraordinary research by scientists reveals that pterodactyls had the ability to fly immediately after birth, something no other winged vertebrate– living or dead– can or could do.

Carried out by University of Leicester palaeobiologist Dr. David Unwin and University of Lincoln zoologist Dr. Charles Deeming, the pair sought to study the flying dinosaurs to discover just how early they could fly.

Past findings of fossilized remains of young pterodactyls in China suggested that their wings were too poorly developed to be able to achieve flight upon hatching.

But it turns out that the opposite is true.

“Recent fossil finds in China and Argentina have provided startling new insights into the reproductive biology and embryology of pterosaurs, Mesozoic flying reptiles,” the study, titled ‘Prenatal development in pterosaurs and its implications for their postnatal locomotory ability’ said.

Nineteen embryos distributed among four species representing three distinct clades have been described and all are assumed to be at, or near, term. We show here how the application of four contrasting quantitative approaches allows a more precise identification of the developmental status of embryos revealing, for the first time to our knowledge, the presence of middle and late developmental stages as well as individuals that were at term. We also identify a predicted relationship between egg size and shape and the developmental stage of embryos contained within.

Science has shattered Petrie's character arc in The Land Before Time. https://t.co/xaotGBdiwT

Until the first researchers made a groundbreaking discovery in 2004, scientists were not sure pterodactyls laid eggs at all. The mother load of pterodactyl eggs were found in China a few years later, resulting in revolutionary scientific discoveries about this popular dinosaur species.

By studying the embryos within the fossilized eggs, Unwin and Deeming were able to determine the development rate of bones located in the wings of the pterodactyls. Pterodactyls had the longest wingspan length of any creature then and now, ranging from 10 to 30 feet. To put that in perspective, the wingspan is longer than a London bus. It’s also ten feet longer than a giraffe stands tall.

Small elongate eggs contain embryos at an earlier stage of development than larger rounder eggs which contain more fully developed embryos. Changes in egg shape and size probably reflect the uptake of water, consistent with a pliable shell reported for several pterosaurs. Early ossification of the vertebral column, limb girdles and principal limb bones involved some heterochronic shifts in appearance times, most notably of manus digit IV, and facilitated full development of the flight apparatus prior to hatching. This is consistent with a super-precocial flight ability and, while not excluding the possibility of parental care in pterosaurs, suggests that it was not an absolute requirement. 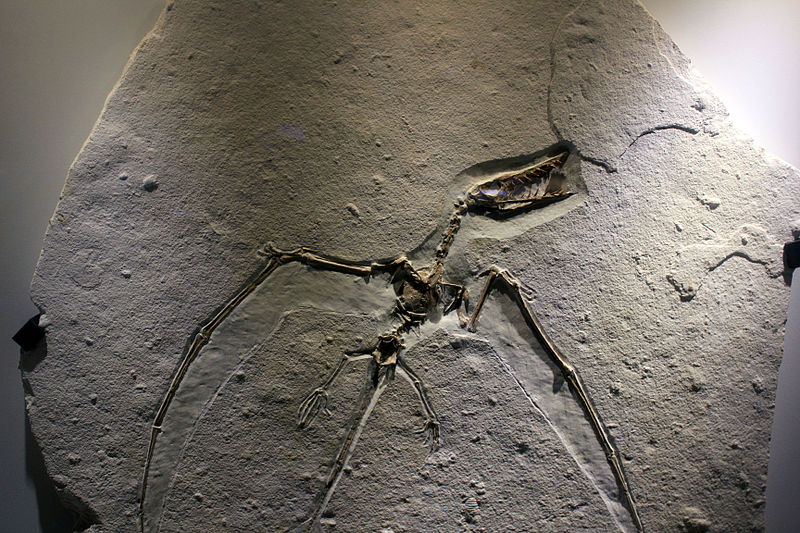 Birds, nor bats, have this ability. They must wait some time after birth before they take that first leap out of the nest. But that doesn’t mean all were successful. Lack of experience often resulted in a deadly first flight attempt, which is why so many young hatchling pterodactyl fossils have been discovered. It also turns out that just like adult sea turtles that lay their eggs and leave without raising their young, pterodactyls likely did the same.

According to the University of Leicester:

[A] fundamental difference between baby pterodactyls, also known as flaplings, and baby birds or bats, is that they had no parental care and had to feed and look after themselves from birth. Their ability to fly gave them a lifesaving survival mechanism which they used to evade carnivorous dinosaurs. This ability also proved to be one of their biggest killers, as the demanding and dangerous process of flight led to many of them dying at a very early age.

Still, many survived their first flight and grew into the fascinating creatures that have been brought to life by the “Jurassic Park” films.

“Theoretically what pterosaurs did, growing and flying, is impossible – but they didn’t know this, so they did it anyway,” Dr. Unwin said.

The fact that pterodactyls could fly from birth may also explain why they had such long wingspans.

The research has also challenged the current view that pterodactyls behaved in a similar way to birds and bats and has provided possible answers to some key questions surrounding these animals. Since flaplings were able to both fly and grow from birth, this provides a possible explanation as to why they were able to reach enormous wingspans, far larger than any historic or current species of bird or bat. How they were able to carry out this process will require further research, but it is a question that would not have been posed without these recent developments in our understanding.

“Our technique shows that pterosaurs were different from birds and bats and so comparative anatomy can reveal novel developmental modes in extinct species,” Dr. Deeming said.

As research continues, we can expect more fascinating discoveries to be revealed about these creatures.

More on flying dinosaurs from the BBC below: