Solar Energy: A revolutionary technology introduced over one hundred years...

Do you belong to the immense list of people who believe that solar technology is a relatively new invention? Well, then, like many other things that have been omitted by our history books, you probably never heard about French inventor Augustin Mouchot who introduced the ‘revolutionary’ technology in 1878, even though he knew about it a couple of years before that.

In 1871, this French genius was funded by the Indre-et-Loire General Council in order to develop a working solar generations at the library of Tours. He presented his work and results four years later in 1875 to the Academy of Science.

“One must not believe, despite the silence of modern writings, that the idea of using solar heat for mechanical operations is recent. On the contrary, one must recognize that this idea is very ancient and its slow development across the centuries it has given birth to various curious devices.”— Augustin Bernard Mouchot said at the Universal Exposition in Paris, France 1878.

In 1878, Augustin Mouchot together with his assistant Abel Pifre demonstrated at the Universal Exhibition in Paris that concentrating Solar Heat could produce a steady stream of electricity. 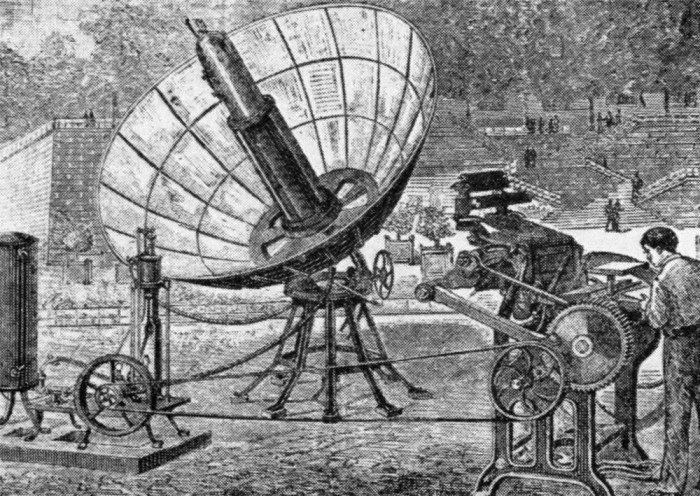 As a matter of a fact, it is very likely that Solar Energy isn’t a revolutionary concept at all since many people will agree that ancient civilizations have not only been able to harness solar energy but the natural energy from our planet thousands of years ago. If you look back to the seventh century, you will notice that back then, people knew to magnify the power of the sun in order to create fires.

And if we travel further back in time, before Augustin Mouchot we will learn that in 1767 was the year the first SOLAR OVEN was invented. This device used the sun’s energy to heat up meals. Actually this technology is STILL being used in some areas of our planet. But the history of Solar Energy goes way back…

Around three thousand years ago the ancient Chinese discovered how to make concave reflectors which helped the turn sunlight into fire. Centuries later, around the 5th century BCE, the ancient Greeks independently developed such solar devices and curiously, both used them to kindle wood for cooking.

People understood in the distant past just how important solar energy was and how much it could provide to our civilization. That is why professor William Grylls Adams and his student Richard Evans Day father developed the ideas of  Willoughby Smith and where the first to observe that electrical currents are produced by sunlight. They discovered away to utilize two electrodes on a selenium plate in order to produce electricity when the device was under the sunlight.

So… If the technology existed way back then, and it was proven to work… Why was it rejected? Well, unfortunately for solar (clean) energy, because of coal prices. It is much cheaper to burn fossil fuels in order to obtain electricity than it was to fund solar energy research. Basically people chose the easier path that was less aggressive for the economy. Shortly after that, the French government announced that solar energy was uneconomical and Mouchot’s funding was shut down.

“Eventually industry will no longer find in Europe the resources to satisfy its prodigious expansion… Coal will undoubtedly be used up. What will industry do then?” — said Augustin Bernard Mouchot, after he demonstrated an early industrial application of solar thermal energy in 1880.

After Mouchot, other scientists researched solar energy and its incredible values and in 1883, Charles Fritts, a U.S. inventor introduced a plan to create solar cells. One of the most notorious scientists in the world, Albert Einstein worked on solar energy in 1905 researching the photoelectric effect, and 16 years later, in 1921, he submitted his research and won the Nobel Prize.

Perhaps one of the most important breakthroughs in solar energy took place when Gerald Peterson, Calvin Fuller, and David Chapin designed a device that took sunlight and converted it into electrical power in the Bell Labs.

As you can see, over 100 years ago people had the ability to change the world and firmly end the anomalous consumption of fossil fuels. But as many things in the past, the brightest mind on the planet do not get to make all the choices and that is why today, we struggle to keep up with the lack of fossil fuels which are destroying our planet piece by piece. In the mid 1950’s, solar panels were developed that could be used on spacecrafts and satellites.

Imagine how different our entire civilization would be if we had introduced into our daily lives the technology of solar energy over one hundred years ago?