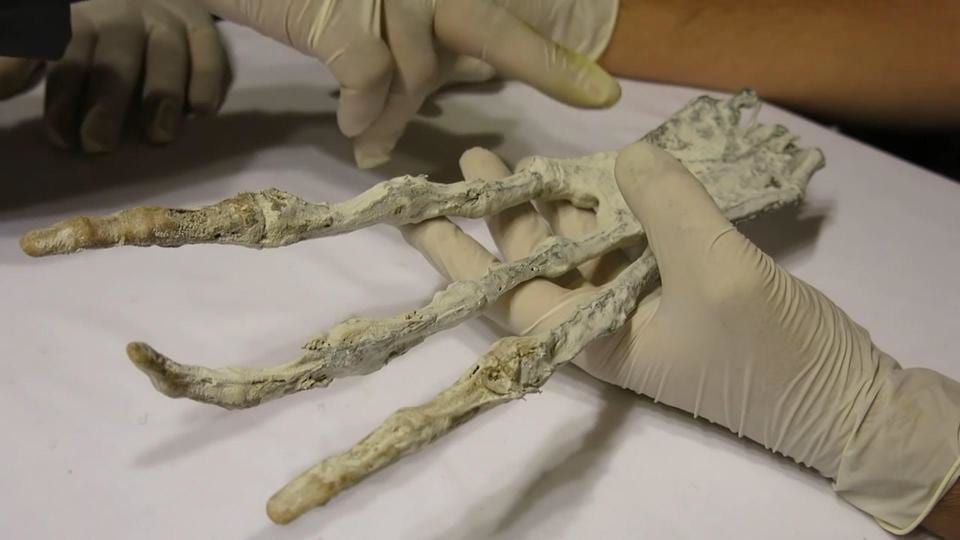 Initial results indicate the ‘alien-like’ claw is not human.

Recently disclosed ‘archaeological material,’ discovered buried underground in Peru has created a buzz on social networks. A three-fingered ‘claw’ and a small, mummified, elongated skull have been dug up in Cusco, and there are some people who believe that the mysterious skeletal remains may point towards an unknown species of humanoids on Earth. Others of course, believe its fake.

Even though no independent tests have been performed on the curious ‘alien claw’ yet, the team in charge of the finding believes that radiocarbon and DNA testing will reveal the true origin of the mysterious hand.

According to reports, the mysterious skeletal remains were found in an undisclosed location –a tunnel in Peru’s Southern Desert— together with a smaller, elongated skull.

Even though many would easily jump ahead and call it a fake; the enigmatic ‘alien claw’ was discovered together with a smaller, mummified elongated skull in Cusco Peru and initial X-ray tests show both artifacts as being genuine.

Initial tests point towards the possibility that both the skull and the enigmatic ‘claw’ belonged to a unknown, humanoid species. That of course has STILL not been confirmed.

Brien Foerster writes on hidden Inca Torus that x-ray analysis of the mystery ‘hand’ show that each of the 3 fingers has 6 bones, while a human hand has 3. Furthermore, physicians in Cusco determined that clearly this is not the hand of a human, but is made up of bone and skin. They were unable to determine what kind of life form it is, or was.

“The detailed photo of one of the ends of the fingers, seen above, shows the skin as well as a fingernail which is surprisingly human looking. The keeper of this and other artifacts does not want to sell them; he simply wants to know what they are.”

“The first analysis are in progress, and we are still waiting for the results. They concern the skin of the mummified head.

Concerning the DNA and C14 tests, we are currently in contact with several laboratories throughout the world.

We want to take all our time to carry out unquestionable and reliable analyzes.

If it’s a fake, trust us, we’ll let you know, loud and clear! For the moment, we have no clue that shows us a fraud.

These artifacts have been examined in Peru in recent weeks by numerous archaeologists, anthropologists, biologists, doctors and anatomists. No one of them thinks this is a hoax. It is therefore urgent to wait for the DNA analysis.”

No independent scientific body has yet confirmed the legitimacy of the claims suggesting the ‘claw’, and curious elongated head belonged to an alien, or unidentified human species.

Discoveries like this are always treated with skepticism, mostly because there have been numerous discoveries of alleged alien skulls and skeletal remains that have turned out to be elaborate hoaxes.