Declassified FBI document Suggests “Beings From Other Dimensions” Have Visited...

Is it surprising that the FBI has shown interest in the study of the UFO phenomena? Is it possible that many science fiction films are actually based on real events, or better called “leaks” given by the government in order to deliberately raise awareness among the population? 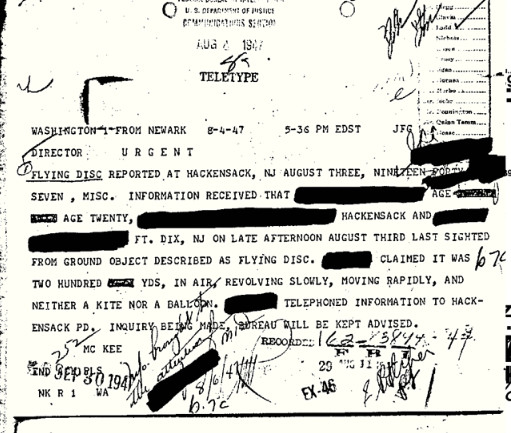 According to reports and “Declassified” documents, we have been visited by numbs extraterrestrial species, some of these, are not only from other planets but from other dimensions. Some of these beings originate from an ethereal plane coexistent with our physical universe. These “entities” that could “materialize” on our planet appeared as giant translucent figures.

Here is a transcript of some of the most important details of the report:

1. Part of the disks carry crews; others are under remote control

2. Their mission is peaceful. The visitors contemplate settling on this plane

3. These visitors are human-like but much larger in size

4. They are not excarnate Earth people but come from their own world

5. They do NOT come from a planet as we use the word, but from an etheric planet which interpenetrates with our own and is not perceptible to us

6. The bodies of the visitors, and the craft, automatically materialize on entering the vibratory rate of our dense matter

7. The disks posses a type of radiant energy or a ray, which will easily disintegrate any attacking ship. They reenter the etheric at will, and so simply disappear from our vision, without trace

8. The region from which they come is not the “astral plane”, but corresponds to the Lokas or Talas. Students of osoteric matters will understand these terms.

9. They probably can not be reached by radio, but probably can be by radar. if a signal system can be devised for that (apparatus)

Addendum: The Lokas are oval shape, fluted length oval with a heat-resistaning metal or alloy is not yet known the front cage contains the controls, the middle portion a laboratory; the rear contains armament, which consists essentially of a powerful energy apparatus, perhaps a ray.

FBI declassified, UFO and the FBI