The “Flying Machines of the Ancient “Alien Gods”

What are the “Flying machines of the “Gods” that are seen in numerous depictions of ancient cultures around the world?

The “Flying machines of the ancient “Gods”

We have seen numerous ancient depictions of mysterious flying objects belonging to the gods, but what are they? Do “Gods” really need “objects” to help them “fly”? What do these depictions mean in reality?

The Hopi Indians from Arizona speak of the Kachina spirits and their incredible ability to “fly” across the skies in their so-called “flying shields” which the ancients call paatuwvota.

According to the Natives, these unique flying objects were circular in shape, as the shield of a warrior, and emitted “a thunderous sound.

In one of the many depictions found throughout the Hopi lands, there is a curious drawing in which the Hopi depict a character sitting on one of those “flying shields” showing its relatively small and maneuverable appearance.

What were these “flying machines” and what do they really depict? Are the “Flying shields” really necessary for the Gods to fly? Or are these depictions of the Hopi mere psychological manifestations or creations of the collective unconscious?

But if these are only psychological manifestations of the Hopi, why do similar depictions appear in other ancient cultures around the world?

These unique “flying shields” were mentioned by Lao Chi-Pen, an archaeologist of the University of Beijing, referring to mysterious cave paintings discovered by him in China in 1961. In fact, among many drawings found in the Hunan Province, one in particular represents a rare scene showing hunting animals fleeing in one direction pursued by men armed with spears, above in the sky are two strange characters that seem to have some sort of halos on their heads and carrying unknown weapons, flying in the sky and sitting on small circular objects like the “flying shields” of the Kachina. Is this a mere coincidence?

The objects mentioned by the Hopi and the paintings found in China aren’t the only. Julius Obsequens writes, around 100 BC:

“Fax ardens Tarquiniis late visa subito lapsu cadens. Sub occasu solis orbis clipei similis ab occidente ad orientem visus perferri.”
“When C. Murius and L. Valerius were consuls, in Tarquinia towards sunset, a round object, like a globe, a round or circular shield, took its path in the sky from west to east.”

“At Aenariae, while Livius Troso was promulgating the laws at the beginning of the Italian war, at sunrise, there came a terrific noise in the sky, and a globe of fire appeared burning in the north. In the territory of Spoletum, a globe of fire, of golden color, fell to the earth gyrating. It then seemed to increase in size, rose from the earth and ascended into the sky, where it obscured the sun with its brilliance. It revolved toward the eastern quadrant of the sky.”

Finally, Obsequens provided another example of this phenomenon for the year 42 BC, stating simply that:

“Something like a sort of weapon, or missile, rose with a great noise from the earth and soared into the sky.”

We have similar depictions of “beings” sitting on some sort of objects that seem to be made to “fly”? A statue found in Veracruz, Mexico, currently displayed at the DeYoung Museum in San Francisco depicts a mysterious creature which seems to sit on top of some sort of “shield.” 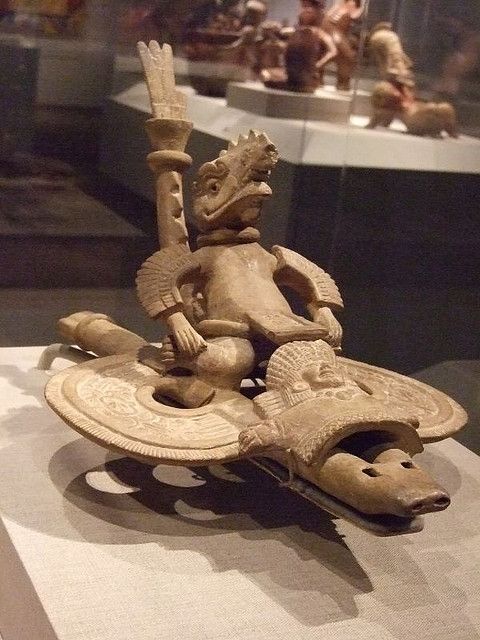 Is this another coincidence?

So what are these mysterious objects that have been known to fly across the skies of our Planet, seen by people in America, South and Central America, China and Europe. Are these just cultural coincidences? If so, they certainly are extremely interesting.

What are your thoughts? What is your opinion about these mysterious depictions of the “flying shields” seen in ancient cultures across the globe? Did they mean to depict actually flying objects? Or were these depictions the result of… abstract art?

THE HOPI HI-SUT-SI-NOM (The Ancient Ones)