The Lost Sphinx of Giza—Experts claim there was a second...

A meticulous analysis of Ancient Egyptian history and study of archaeological evidence indicate that there were two sphinxes located at the Giza plateau near the Pyramids, argues a researcher who has spent more than a decade searching for the lost “second” Sphinx.

“Have you ever seen just one Sphinx in later Egypt that didn’t have another? Not only did the ancient Egyptians mention the second Sphinx, but so did the Greeks, Romans, and Muslims. It was destroyed between 1,000 and 1,200 AD.”

Covered by tons of stone and sand, well hidden under the Giza plateau lies one of the greatest mysteries of ancient Egypt. The Second Sphinx of Giza, an ancient monument that accompanied the one still standing today.

It seems to have disappeared under strange circumstances, but not without leaving us with details that suggest it was as real as the Great Sphinx standing guard near the pyramids today.

This isn’t something an author came up with, but it’s what Bassam El Shammaa thinks, an Egyptologist and scholar who has been tracking the lost Sphinx for more than a decade.

But based on what does he think there was a SECOND Sphinx at the Giza plateau?

Well, first of all, when you think about the ancient history of Egypt, and the Sphinxes that have been found across Egypt, you always find evidence of duality, and that all other sphinxes found in Egypt come in pairs, so the fact that the Sphinx at the Giza plateau is alone can be considered as an anomaly. And this is exactly what El Shammaa thinks as the idea of two sphinxes existing is more in line with ancient Egyptian beliefs, which were mostly based on duality. But the entire evidence isn’t based just on that fact.

Anyway, in order to come to this controversial conclusion, throughout his years of work El Shammaa has obtained innumerable ancient texts, archaeological data and even an unusual satellite image satellite taken by NASA that seems to corroborate his hypothesis.

“Every time we have to deal with the solar cult, we should discuss of one lion and one lioness facing each other, posing parallel to each other or sitting in a back-to-back position,” says El Shammaa.

The Egyptologist points towards the Egyptian creation myth, where the almighty Atum gives birth to his son Shu and his daughter Tefnut, curiously, in the form of a lion and lioness.

The controversial expert also points out the Dream Stela, believed to have been carved by Thutmosis IV and located between the paws of the Great Sphinx which clearly depicted two sphinxes.

So the second Sphinx of Giza may have been carved in the form of a lioness. But…what happened to the monument?

El Shammaa believes powerful lightning struck the Lioness millennia ago and destroyed it. 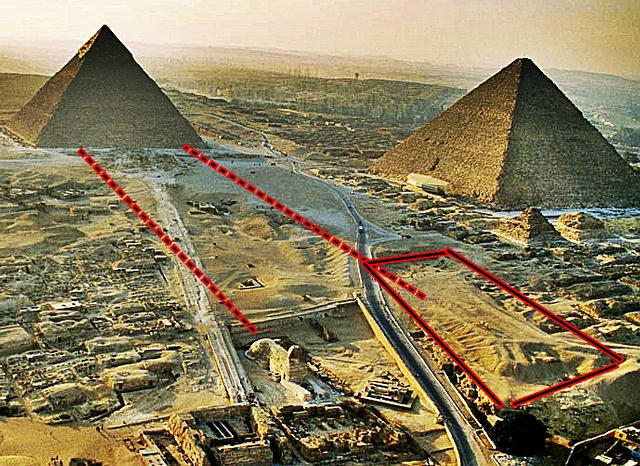 According to the researcher, the definitive documentary evidence is found in the Pyramid texts. There, we can read in the words of the creator god Tuna “I was with two, now I am with one”. Something terrible must have happened.

The theory of the Second Sphinx not only has documentary evidence based on the analysis of the texts and the iconographic representations of the ancient Egyptians. Bassam has also provided material evidence from NASA’s most up-to-date photographic analysis. Thanks to the SIR-C / X-SAR photographic study of the American Aerospace Agency, it has been possible to analyze the density of the geological layers that make up the ground and the monuments of the Giza plateau. Well, with this photograph (below) we can actually see that in the area where Bassam said his the second Sphinx was located, there really was a structure that NASA colored in yellow. 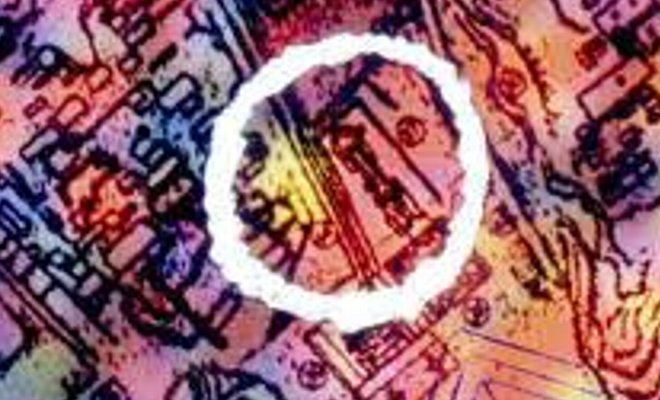 “This signal,” Bassam explains, “is usually received in the form of pulses of a given wavelength ranging from 1 centimeter to 1 meter and corresponding to a frequency range of about 300 MHz up to 30 GHz. It produced echoes which become digital information that is then projected onto an image. This is composed of numerous points or pictographic elements, each of which represents a specific place scanned on the ground by the radar. In the case of my working hypothesis, they correspond to the remains of the Second Sphinx.”

“The Endeavor Satellite image released by NASA just above the Pyramids Plateau confirmed the discovery. But it makes a lot of sense that lightning could have damaged the Sphinx due to the fact the monument was often depicted with a double metal crown that must have conducted the shock to the neck,” stated El Shammaa.

The Pyramids of Giza predate the mysterious utterances recovered at Saqqara but the lion deities are predynastic and the construction of the pyramids must have been inspired by those mythological figures which had always appeared in duo.

Archaeologist Michael Poe seems to agree with El Shamma, as he is also convinced there was a SECOND Sphinx at Giza.

Poe argues that there is no evidence of Khafre ‘repairing’ the Great Sphinx and that there are ancient texts that corroborate his theory.

“There is currently absolutely no archaeological evidence of Khafre ‘repairing’ the Sphinx. There are two ancient Egyptian references, both during the Middle Kingdom, at a considerably later time. One has it that Khafre found the Sphinx (which would support the Sphinx is older than Khafre), and that Khafre altered its face. This same source (fragmentary papyrus) states that there was another Sphinx facing this one on the other side of the River Nile, and both of the monuments were constructed here to represent the dividing line between Northern and Southern Egypt. The other reference said that Khephren built the Sphinx.”

“Have you ever seen only one Sphinx in later Egypt that didn’t have another? Not only did the ancient Egyptians mention the second Sphinx, but so did the Greeks, Romans, and Muslims. It was destroyed between 1,000 and 1,200 AD.”

“At the access to buildings and temples there are two Sphinxes, side by side, but on the avenue or approach to the temple, they are facing each other. At times they may have as much as 100 or so facing each other in the avenue. The Nile is Egypt’s Avenue, and it divides the North and South. Countless ancient writings about the two Sphinxes suggest that they were facing one another. The second one, by the way, was partly demolished during a high Nile flood, and then completely destroyed by ensuing Moslems carting it off to rebuild their villages,” concluded Poe.

And as we keep digging we find more evidence of a possible second Sphinx. Authors Graham Hancock and Robert Bauval also seem to agree about a second Sphinx existing at the Giza plateau and in their book The Message of the Sphinx, they maintain that the Sphinx was made to represent Atum-Harmachis.

After having demonstrated on paper this suggestive possibility thanks to an exhaustive research work that has taken more than a decade, the only thing left for El Shammaa is to obtain an excavation permit that will help him demonstrate, whether or not there is another Sphinx next to the Great Sphinx Of Giza more than 5,000 years ago.