The Nazca lines of Jordan: Mysterious geoglyphs created by an...

The mysterious wheel-shaped geoglyphs in Jordan could date back as far as 6500 BC according to archeological studies. This means that these geoglyphs are at least 6,000 years older compared to the more famous ‘Nazca lines’ in Peru. While researchers are still not one hundred percent certain as to what their exact purpose was, they believe the enigmatic ‘wheels’ which were drawn into the black desert of Jordan could have been used as celestial observatories and even burial grounds.

According to Professor Gary Rollefson from the Whitman College in Walla Walla, the different wheels in Jordan likely had different uses.

‘The presence of cairns suggests some association with burials since that is often the way of treating people once they died,’ Professor Rollefson said.

Just as the Nazca lines in Peru, the mysterious geoglyphs in Jordan can only be appreciated from the air. Researchers still cannot explain why these giant wheels were built to be almost invisible from the ground.

The enigmatic circles in Jordan were first encountered by pilots during World War I. RAF Flight Lt. Percy Maitland wrote about the enigmatic features in the desert in an article for the journal Antiquity in 1927.

According to Lt. Percy Maitland t the Bedouin called the structures “works of the old men,” a name still sometimes used by modern-day researchers. Researchers were able to date the mysterious geoglyphs using a technique called optically stimulated luminescence (OSL) which is used to determine how long ago minerals were last exposed to daylight, measuring the energy of photons being released.

According to archaeological study, the mysterious geoglyphs in the Jordanian desert demonstrate accurate geometric patterns which extend up to several kilometers. No one has been able to understand how ancient mankind created these figures over 8000 years ago, a time which according to mainstream scholars, people were not evolved enough to create such geometric patterns. 8000 years ago the climate of the Middle East was much wetter and the surrounding landscape was different from what we see today. 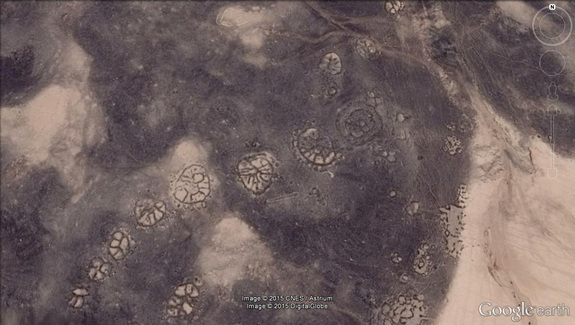 According to writings of archaeologists in the Journal of Archaeological Science, the works “demonstrate specific geometric patterns and extend from a few tens of meters up to several kilometers, evoking parallels to the well-known system of geometric lines of Nazca, Peru.”

“They occur throughout the entire Arabia region, from Syria across Jordan and Saudi Arabia to Yemen,” wrote the researchers. “The most startling thing about the ‘Works’ is that they are difficult to identify from the ground. This stands in contrast to their apparent visibility from the air.”

According to Professor David Kennedy, from the University of Western Australia, ‘People have probably walked over them, walked past them, for centuries, millennia, without having any clear idea what the shape was.’