The giant flat Mountaintops at Nazca have remained a profound mystery for decades. Even today, archaeologists are unable to explain how and why ‘ancient man’ created massive, flat ‘runway-like’ marks thousands of years ago.

We have all been fascinated by the Nazca and Palpa lines for decades. These incredible pieces of ancient ‘art’ are located in the arid Peruvian coastal plain approximately 400 kilometers south of modern-day Lima. The staggering geoglyphs cover around 450 kilometers and were created on the arid floor sometime between 500 BC and 500 AD.

The Nazca and Palpa lines are considered one of archaeology’s greatest mystery, mostly because of their size, quantity, and nature. Some of the lines depict living creatures, stylized plants, and imaginary beings, as well as geometric figures several kilometers long.

According to studies, the largest of the Nazca figures is approximately 1000 feet, and the longest geoglyph goes on for around 9 miles.

So how is it possible that these giant ‘runway-like’ mountains even exist? And if the Nazca are known for having created the incredible desert-art, intricate figures of animals, plants and geometric shapes, why would they even bother and create these huge flat surfaces? 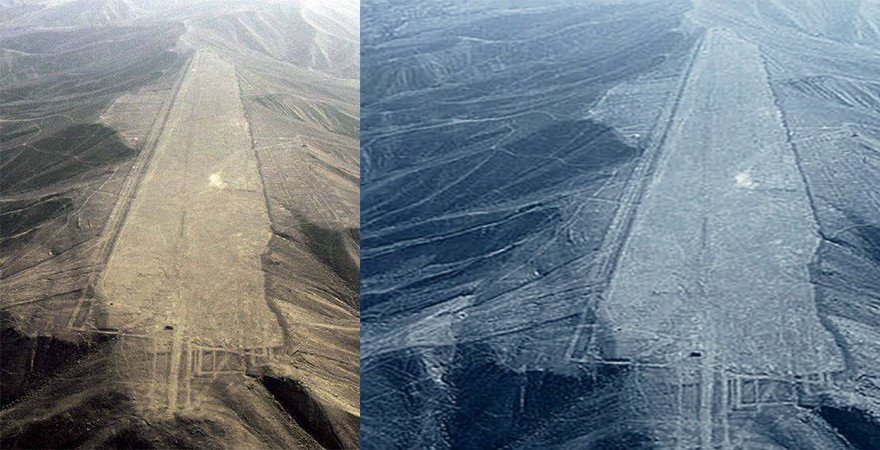 There are numerous questions that remain unanswered at Nazca. Were these giant figures meant to be seen from above? Do they mimic constellations in the sky? What were the ancient’s trying to say to future generations? Were the Nazca lines mere ancient art? If so… why would ancient mankind create art that cannot be fully appreciated from the ground?

Is it possible that –as Ancient Astronaut theorists suggest– the ancient ‘runways’ seen at Nazca are in fact navigational markers used by advanced extraterrestrials that visited the area thousands of years ago? And is it possible that some of the giant, flat triangles were created by massive spacecraft that touched down in the distant past?  What if the ‘gods’ used these paths in the distant past to visit the people in Peru? And what if, ancient people created figurines such as the Nazca Astronaut in honor of those “gods” who came from above? 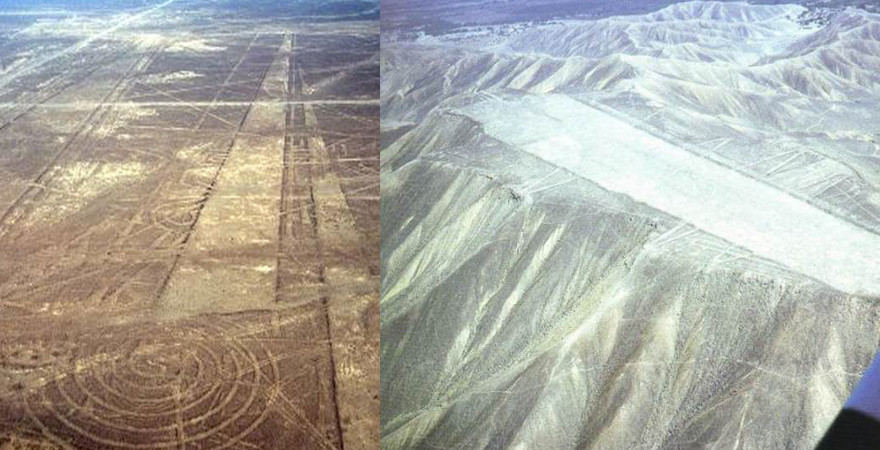 Interestingly, according to some local legends, the mysterious Incan creator god Viracocha commissioned the Nazca Lines and glyphs in the past. These lines are said to be created by the Viracocha himself. He was the great teacher God of the Andes.

Skeptics remain positive that these giant figures, flat mountaintops were not created by advanced flying machines. But, could the ancient Nazca people have created perfectly-shaped triangles, thousands of meters in diameter with their feet as some researchers suggest? And if so, then how can we explain the flat mountaintops located around the Nazca lines?

Today when it comes to the Nazca and Palpa lines, the most accepted theories are that these are giant astronomical calendars, ceremonial sites, coordinate systems, and last but not least, giant landing strips created by our cosmic neighbor’s thousands of years ago.

What do you think they are?