It is a language itself, developed by the Mayan civilization between 1000 to 500 BC, a code, a style and an incredible archaeological discovery. It can still be read, many centuries after it was invented; with words in form of columns, walls, facades, and ornaments.

It is an architectural writing system unique in the world. These words written in ancient times, remained silent before our eyes, throughout the long and incredible history of Mexico, but now thanks to the efforts of scholars and researchers, this lost secret called The “Puuc Code” is slowly “speaking” again, re-writing history and helping researchers understand the history, knowledge and daily life of the ancient Maya civilization.

The Puuc Code; architecture and symbolism is conceived through six themes that reference the Puuc style; Techniques and building elements, Symbols, that depend on the buildings and their ornamentation, the projected vision of our universe projected through the planning of their cities. The research displayed at “EL MUSEO REGIONAL PALACIO CANTÓN” displays the Architecture as a symbol of power transmitted through the Puuc Code, which is considered a  World Heritage. All of these elements combined, form a stylistic unity, a code that reflects a shared worldview and was understood by the pre-Hispanic Maya society.

This form of construction was possibly unique to the Maya, is characterized by the ornamentation of ceremonial buildings with the use of masks on the walls, friezes, and panels with hieroglyphics. The distribution of each building, the interior design of every room and decoration present, integrated a code that describes the life of the ruling elite.

This architectural style redefines the history of the region, and it has been preserved in the Yucatan region and can be seen in ceremonial sites in the Puuc Route: Uxmal, Oxkintoc, Sayil, Labna, Kabah and Xlapac in two basic styles: Early Puuc style, whose buildings are usually false arches and peaks formed by stone blocks and as multiple doors consist of round columns with square capitals. The Late style, was used in concrete walls and vaults, coated with carefully carved stones edges; the upper walls displaying geometric mosaic-like sculptures, including masks over doorways and corners.

Some researchers believe the Puuc period was a new stage in the architectural evolution of the Maya. By studying their masks and figures researchers could decipher the secrets behind the Mayan technological advancement and accurately record the reach of the Ancient Maya civilization with cultures and civilizations.

A good example of the “Puuc Code architecture and symbolism”  can be found at the National Institute of Anthropology and History (INAH) taking place in the capital of the Yucatan region, Mérida.

“What we can perceive in the decoration of the Puuc architecture really is a language, a discourse”, says Huchim Herrera. “A discourse that incorporates aspects of Baroque style and ornaments of friezes and masks on all the walls, it is, in short, a language.” 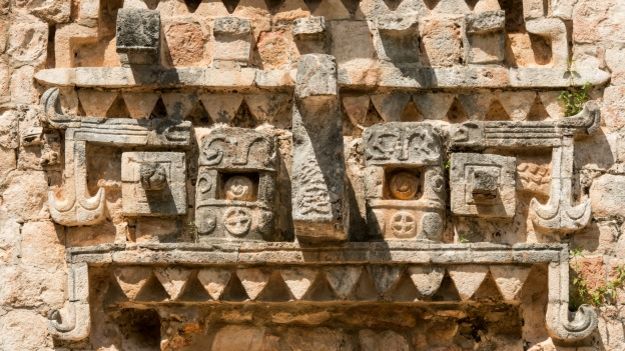