The remains of 9,000-Year-old man-made structures lay at the bottom...

These two discoveries (Lake Huron and Lake Michigan) prove that over 9,000 years ago, a complex society inhabited what are now the Great Lakes of North America. 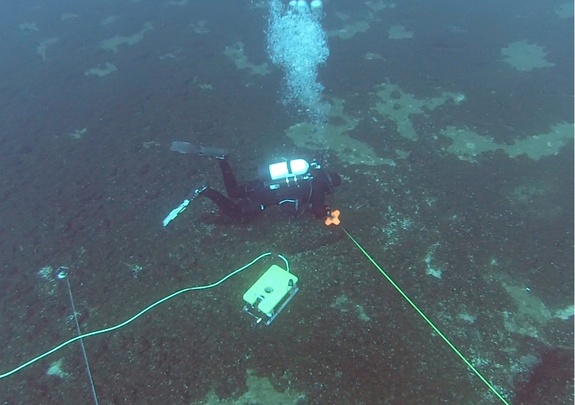 Recently underwater scientists have discovered traces of what appear to be traces of human activity at the bottom of Lake Michigan when they found what seems to be a Stonehenge-like structure at the bottom of the lake. In addition, a carving of what appears to be a mastodon was also discovered at the depths of lake Michigan suggesting complex human societies existed in the area. However, this isn’t the first finding that points towards a possible unknown ancient society inhabiting the area nearly 10,000 years ago.

See a more recent documentary about the finds in Lake Michigan from Discovery UK below:

Interestingly, not long ago, underwater archaeologists also discovered traces of a similar ancient civilization believed to predate both the Pyramids of Egypt and Stonehenge in England by several thousand years, when they found structures that point towards complex human activity at the bottom of Lake Huron, one of the five Great Lakes of North America.

Numerous similar submerged ancient sites have been discovered in the last couple of decades. Moreover, scientists firmly believe that there are still countless ancient sites that were swallowed by rising water levels across the globe.

The discovery made at the bottom of Lake Huron undoubtedly points towards a complex ancient society that no one suspected ever existed previously.

The structures were identified as the research team sued underwater sonar and remotely operated underwater vehicles with video cameras which eventually allowed scientists to spot two parallel lines of stones which were 8 meters wide and 30 meters long.

The finding was confirmed when the University of Michigan conducted a study discovered ancient hunting structure some 40 meters below the waters of Lake Huron.

Researchers concluded that the structures are incredibly well-preserved mainly because of the calm conditions of the lake and their relative position offshore.

The study documenting the discovery was published in the journal Proceedings of the National Academy of Sciences. According to several reports, divers identified a complex array of linear stone lanes and V-shaped structures along an underwater ridge.

Researchers believe that the ancient structures were once part of a system that helped ancient man herded wild reindeer which passed through the region during their migration, making hunting a bit easier.

Then, using computer simulation, researchers were able to identify migratory patterns of the caribou (Wild Reindeer) which eventually led to the discovery of two main chokepoints where Caribou herds converged during spring and autumn migrations.

“This is the first time we’ve identified structures like these on the lake bottom,” said John O’Shea, curator of Great Lakes Archaeology in the Museum of Anthropology and professor in the Department of Anthropology. “Scientifically, it’s important because the entire ancient landscape has been preserved and has not been modified by farming, or modern development. That has implications for ecology, archaeology, and environmental modeling.”

According to Science Daily, the Paleo-Indian and early Archaic periods are poorly known in the Great Lakes region because most of their sites are thought to have been lost beneath the lakes. They are also times of major shifts in culture and the environment.

“Without the archeological sites from this intermediate period, you can’t tell how they got from point A to point B or Paleo-Indian to Archaic,” O’Shea said. “This is why the discovery of sites preserved beneath the lakes is so significant.”

These discoveries made at Lake Huron and Lake Michigan prove complex ancient structures existed in an area where researchers previously thought elaborate hunting societies did not exist.

Journal Reference: Evidence for early hunters beneath the Great Lakes. Proceedings of the National Academy of Sciences, June 8, 2009