These Are These Mysterious Spheres Of Costa Rica

Just like the Pyramids of Egypt and other incredible ancient constructions, the stone spheres of Costa Rica arouse numerous questions that provide very little answers.

One of the most asked question is, how did they get there? What is their Reason? And who “built” them? Even though numerous individuals have tried solving the mystery surrounding these spheres, no one has been able to come up with a normal conclusion. 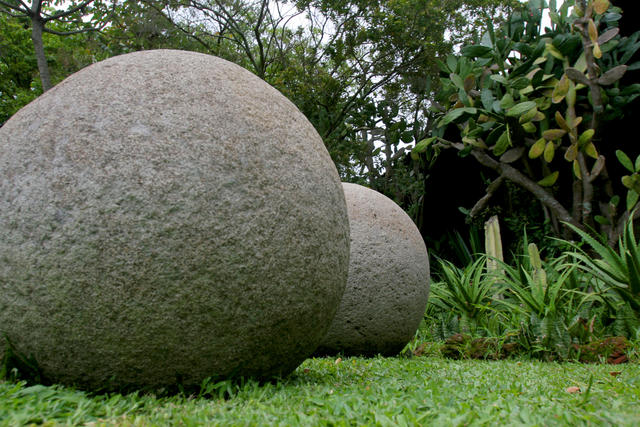 These mysterious spheres were discovered in the 1930’s when workers from banana plantations found them among the vegetation. The historical artifacts were turned into statues and ornaments placed in front of the houses of famous politicians and businessmen. According to researchers, around 3000 of these mysterious spheres have been discovered through the years, some of them have been destroyed as people searched for gold and treasures inside them. The exact number of spheres is a mystery as some researchers believe that some of these spheres could be buried beneath the surface.

Some believe that the monumental stone spheres of Costa Rica “are proof” that Atlantis, the mythical island continent described by the Greek philosopher Plato, was in America. Ivar Zapp and George Erikson are two anthropologists who support this theory as they are trying to explain the origin and function of the pre-Columbian artifacts. According to these two researchers, the hundreds of spheres that range between 0.5 and 2.50 meters i diameter are evidence that the Diquís Delta, southwest of the country was the place where a highly advanced ancient civilization settled in the past.
In their research, they explain that this ancient pre-columbian civilization developed a sort of navigation school and that these spheres were used as an important navigational instrument.

According to researchers, the alignment of certain areas holds an important part for the understanding of our past and the ancient civilizations that inhabited the Earth. Some researchers claim that megalithic sites such as the Pillars of Hercules (Gibraltar), the Egyptian pyramids, Stonehenge (England) and Easter Island are proof that the Atlantean civilization was related to other civilization around the globe.

The indigenous people who placed the spheres to their respective locations claim that they were not their builders. The natives took the spheres as a sign from the gods and considered them to be of great importance.

So if the indigenous people of the region weren’t the ones who built these mysterious spheres, who built them? Was it an ancient civilization that inhabited the region in pre Colombian times? Or is it possible that the ancient continent/city of Atlantis did in fact exist in South America and these spheres are proof of it?

According to Bribri cosmogony, one of the largest ethnic groups in Costa Rica whose beliefs are shared by the Cabecares and other ancient tribes in America, the god of thunder Tarathrew the giant stone spheres at the Serkes (gods of the winds and hurricanes), with the help of an immense blowgun in an effort to keep them off the land. Other beliefs, were that the spheres kept gold and precious stones inside, which led to the destruction of many of these spheres.