This is the Bridge “Held” by a Pair of Giant...

The cyclopean structure is part of a plan of the Asian country to attract tourism. The bridge, which seems to be held by a pair of giant hands is about to become one of the most photographed structures on the surface of the planet.

In the mountains above Da Nang, Vietnam has a unique cyclopean piece of a bridge. Its design is unlike anything you’ve ever seen.

Surrounding a 150-meter path framed by flowers, a golden bridge shines in front of the hills of Ba Na, supported by a pair of giant hands.

Called the Golden Bridge, it opened its doors to visitors in June of 2018.

This bridge is located at 1,400 meters above the sea level, a height that creates an optical illusion as if the bridge was on a strip of silk hidden in the clouds above Da Nang.

The bridge has a length of 150 meters and is divided into eight sectors.

Along each perimeter, there is a line of Lobelia Chrysanthemum flowers, which adds an additional layer of color to the gold balustrades.

The pair of giant hands has been finished with a degraded effect, which creates the illusion of age and antiquity. The massive hands holding the bridge seem as if a giant was reaching out of the Earth.

The project is part of a $ 2,000 million master plan to attract tourists to the area.

Although no designer has been linked to the structure everyone seems to be talking about, previous design models have been linked to TA Landscape Architecture. 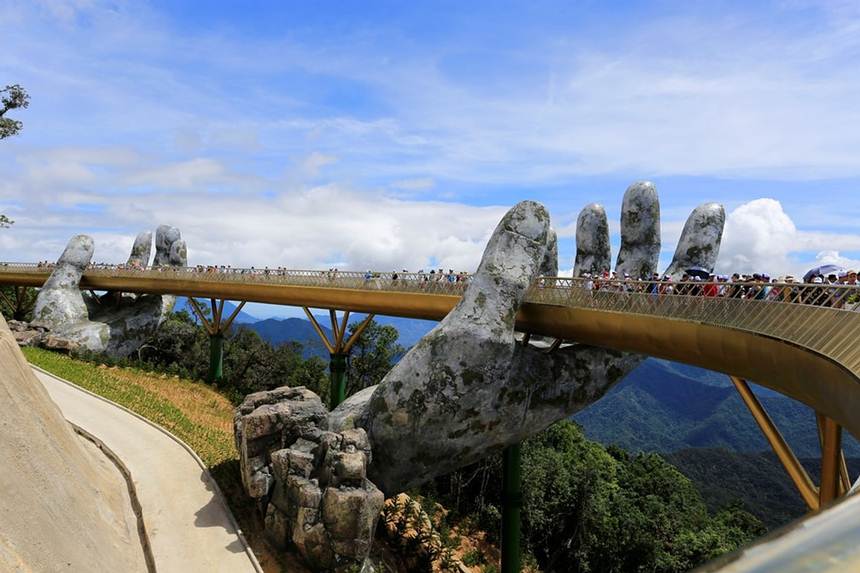