Tunnels in spacetime could take us to another universe claims...

According to a radical theory, a spacecraft could survive a trip through a wormhole exiting on the other side –which could be a totally different universe– technically intact. 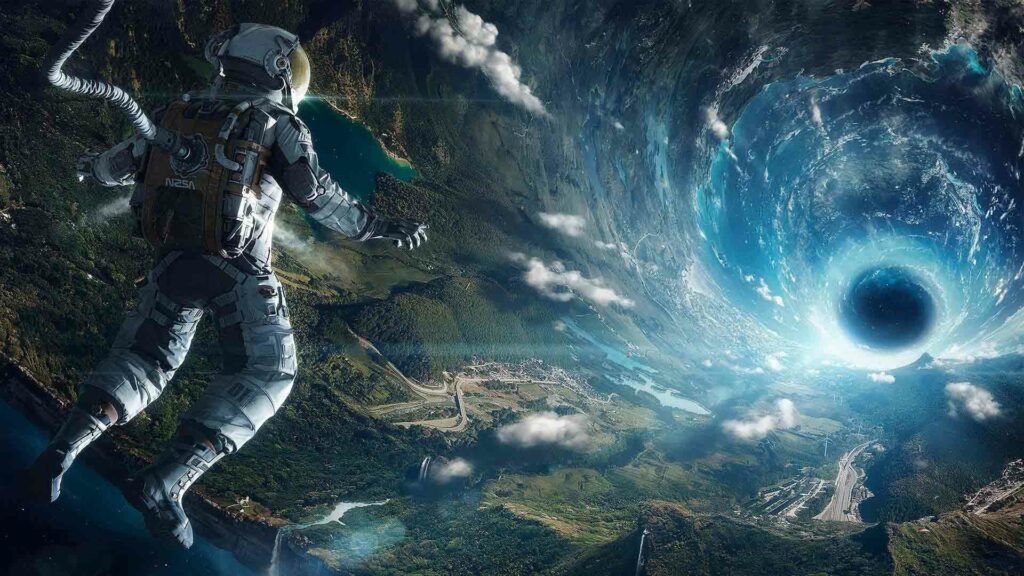 However, the biggest problem is that these cosmic gateways are considered to be inherently unstable. According to scientists, when a particle enters a wormhole, it creates dangerous fluctuations which cause the structure to collapse in on it.

However, a new theory proposed by a group of physicists suggests that a person or spacecraft could make it through a wormhole in the center of black holes, theoretically at least. This could help the traveler access another universe on the other side.

According to researchers, wormholes are theoretical tunnels that act as shortcuts in space-time. If wormholes actually exist, one they these cosmic shortcuts could help us reach distant corners of the universe in a relatively small time.

Assuming that wormholes can be found at the center of a black hole, researchers from the University of Lisbon in Portugal proposed a model how objects like a chair, a researcher and a spacecraft would be able to survive the journey… technically intact.

“What we did was to reconsider a fundamental question on the relation between the gravity and the underlying structure of space-time,” said one of the team, Diego Rubiera-Garcia from the University of Lisbon in Portugal.

“In practical terms, we dropped one assumption that holds in general relativity, but there is no a priori reason for it to hold in extensions of this theory,” added Professor Rubiera-Garcia.

The team of researchers analyzed each object individually as a physical body traveling towards a black hole, modelling an aggregation of points connected by physical interaction holding them together as they travel alongside a ‘geodesic line.’

“Each particle of the observer follows a geodesic line determined by the gravitational field,” says Rubiera-Garcia. “Each geodesic feels a slightly different gravitational force, but the interactions among the constituents of the body could nonetheless sustain the body.”

According to the theory of General Relativity proposed by Albert Einstein in 1915, a ‘body’ approaching a black hole will be crushed along one direction and stretched along the other. Since the wormhole radius is believed to be finite, researchers demonstrated that the body would be crushed as much as the size of the wormhole.

In their study published in the Journal Classical and Quantum Gravity, scientists demonstrated their theory by showing how time spent by a light ray in a round trip among two parts of the body is ALWAYS finite.

Researchers explain that finite forces no matter how strong, are able to compensate for the impact of a gravitational field near and inside the wormhole on a physical body travelling through it.

“Thus, different parts of the body will still establish physical or chemical interactions and, consequently, cause and effect still apply all the way across the throat of the wormhole,” they explain.

According to Rubiera-Garcia, a physical object could  survive a trip through a wormhole exiting on the other side –which could be a totally different universe– technically intact. However, the body would be crushed to the size of the finite wormhole. At least it would make it through… right?

“For a theoretical physicist, the suffering of observers is admissible (one might even consider it part of an experimentalist’s job), but their total destruction is not,” wrote Rubiera-Garcia and his team.

However, all of this remains a theory until we manage to actually see a black hole.