Is it possible that Astronauts of the Apollo missions discovered structures of Alien origin on the moon as some Ufologists suggest? And could this be the reason why mankind hasn’t returned to the moon in recent years? The big question a lot of people ask today is, “are governments around the world and their organizations covering up information of Extraterrestrial life?” According to these images and videos the answer is a big YES.

So, take a look at these images and you be the judge. Let us know what you think these ‘structures’ are if, of course, you think they are structures in the first place.

When NASA ‘nuked’ the Moon… they destroyed an Alien base?

The first image that caught our attention is one directly connected to the LCROSS mission. The main LCROSS mission objective was to explore the presence of water ice in a permanently shadowed crater near a lunar polar region. It was launched together with the Lunar Reconnaissance Orbiter (LRO) on June 18, 2009, as part of the shared Lunar Precursor Robotic Program, the first American mission to the Moon in over ten years.

This “nuked” moon base might perhaps explain why we haven’t been there in recent years. Why would we avoid the Moon so much? We know that it is a place filled with minerals, it has water (and they really needed to nuke it to find out?) and it would make a perfect outpost for anyone who wants to continue the exploration of our solar system and it would also help us get to Mars and beyond. Could these structures (and I say structures because there are more) be the reason NASA has not been on the Moon in a while? Why destroy the Moon base? All of these questions are still unanswered and we can only continue and wonder what is happening on our Moon.

The ultimate proof of Alien bases or… just weird-looking pixels…? 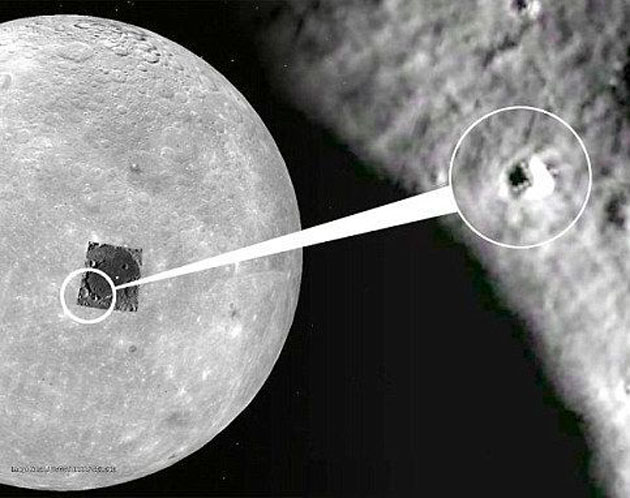 This mysterious object is believed to be another base on the moon. While naysayers have been… very skeptical about anything about the moon that seems odd there are ufologists and a lot of folks out there that remain confident that there are a lot of ‘Alien’ structures on the moon and the image below is the ultimate evidence to back those claims up.

Sceptics argue that the mysterious objects are actually simple pixels that do not appear in the original image. In addition, they argue, that if you look closely you can see a set of other points “scattered” in other areas of the Moon. The answer to this is that Google stores multiple image frames in various resolutions using filters that create noise along the boundaries between light and dark regions which create curious spots that some might interpret as out-of-place-objects. But the pixel theory does not explain geometrical patterns in these objects. If you take into account the pixelation theory, then you would expect the pixels to create random dots not connected, but the objects that have been identified on the moon follow specific geometrical patterns; like triangles and rectangles. Here are some interesting images that can debunk the pixel theory about the lunar bases/objects. (Credit Google Maps)

Alien Moon Base, Moon base, NASA